Malaysia: The Plight of Penan

The Penan tribe, indigenous people of East Malaysia, have taken quite some press and blog space this year. Kopi Sejuk [cold coffee] writes:

However, the driver did not send the passengers – two boys and three girls – to the school directly. He dropped by a logging camp and told the students that they had to spend the night there.

“It was around 4pm. Although the school is not far from the camp, the driver didn’t want to continue the journey. The boys and girls were separated into two rooms. I was with my younger sister and another girl.

When night fell, the men in the camp were drinking. In the middle of the night, several men came into our room. One of them dragged me from the room and took me to the bushes behind the camp,” Cynthia recalls her ordeal. The other two girls were not harmed. Photo courtesy of the Borneo Project

These allegations were initially reported by the Bruno Manser Fonds (BMF), a wildlife and environmental NGO. Following this, Malaysian dailies highlighted the allegations of rape of the Penan womenfolk by employees of two logging companies. BMF reported,

Penan women from the Middle Baram area of Sarawak are launching a cry of alarm to the international community over cases of sexual abuse by logging company workers in the East Malaysian state’s rainforests.

Malaysian blogger and activist, Joseph Tawie, writes on his blog, the Broken Shield:

On the rape cases of the Penan girls, the government had to deny that there was no such a thing, as it did not want the story to be blown up because of international implications. First, they did not want the world to know that the Penans had been deprived of their livelihood when their “pemakai menua” territorial domains and their ancestral lands were seized for oil palm and acacia plantations as well as destroying their forests, the sources of their foods. If the Penans’ plight is to be highlighted, then the possibility of our tropical forest timber and palm oil exports may be banned by the European Union, USA and Japan.

Taib Mahmud reveals even more on his blog, the Sarawak Headhunter:

When Chee How [Taib Mahumd's personal assistent] returned to Kuching, he confirmed that the local Penan communities did tell him the story of a 15-year-old girl raped by some security personnel, and a six-year-old boy had also died from a tear gas attack upon a blockade put up to resist logging operations.

Apparently, the Penans had made the long-trip downriver to Marudi and even Miri, trying to make police reports against the crimes committed on their children. But the policemen on duty in these places simply refused to accept their police report. (It is against the law to refuse to take a police report, but if you are meek, shy, and respectful Penans, what can you do?)

We then decided that perhaps it would be better to bring the Penans to Kuching to lodge the police report. I was a serving MP, and had a little clout with the police, the media, and government departments and agencies in the capital city of Sarawak…

I tell this tale not for the self-serving purpose of showing how heroic I was in trying to bring justice for the Penans. I merely want to show how hard it is for the Penans just to make a police report if a Penan girl is raped, and a Penan boy, killed.

That is the sort of injustice that cries out for the total overhaul of our political culture. Surely, the greatness or meanness of our Malaysian society is judged by how the weakest members of our Malaysian body politics are treated by the institutions of power?

Since then, I have thought about that poor Penan girl often. The Penan are one of the few remaining nomadic tribes of the rainforest and I think the only nomadic hunter gatherer people of Borneo. Most of the communities are within the Malaysian state of Sarawak. Very sadly the Sarawak rainforest in the last 20 years has diminished through intensive state backed logging. The majority of the Penan communities have lost their traditional way of lives and have been forced into settlements. I don't know enough about the communities but I can only assume that some are better off than others.

Jeffery Jim writes about his own encounters with the Penan:

I sat down close to them. It is true that they are timid and very reserved. I give them a warm smile and say hello. It is not easy to talk to them since they are victims of much aggression and discrimination.
…
These Penans that I have encountered are no more nomads. They have settled down just like the others, only that they are substantially lack of prime necessities such as clothings and food. Their daily activities still maintain the same. They still survive by the jungle. They hunt for food and at most time, their kills is the only source of income. They trade their kills. Sometime they sell it for a really low price in comparison to their effort. Beside hunting, occasionally they generate their income by doing hard labor. They carry jerry cans of fuel and stove tank for hours for the use of the local Kelabit [another indigenous tribe]. They actually contribute to the Kelabit by giving them the option for cheaper goods compare to the flown in goods which are highly priced.

Recently, i'm angered by the article i'd read inside the newspapers.. it is regarding the issues of the Penan community… now, their teen girls are being targeted as an easy pray for the loggers to fulfills their sexual desires… fxxk those stupid, inhuman, moron rapers… how can do such an act to such innocent people… those young teenage girls whose life are shine with the bright hope of the future, suddenly ruined in one single incident that may changes their life path forever…
…
i'm mr. nobody… my voice won't even reach out to them.. i'm glad there are some responsible NGOs who are looking into this matter such as Suhakam.. please save them and bring the culprits into the face of justice… doesn't mean that the Penan lives in the rural areas their lives, their plights are taken easily… they are the people have the same equal right as you and me and also deserves a better and secure life.. away from fear of the evil society… It is reactions like these which caused the Women, Family and Community Development Ministry to form a special task force to look into the alleged rape and abuse by loggers against Penan women and girls (to be ready in December). Furthermore, Malaysian Human Rights Commission, SUHAKAM also set out its own investigations into the matter.

NGOs responded with a press conference, calling for police in the Malaysian headquarters in the capital to look into the matter, rather than the police in the state of Sarawak. A blog with the NGOs press release states:

We further urge that proper police investigation commences as soon as possible with the Bukit Aman Police heading the investigation as the communities affected have expressed a serious loss of confidence against the Sarawak police due to their long standing dealings with them including in disputes with logging companies and the inaction and perpetuation of impunity in the aforesaid abuse cases.

We also wish to add that in November 1994, the Penans lodged a police report listing 10 instances of abuses committed against their persons, property and lands, including the rape of a 12-year-old girl by Police Field Force personnel (PFF, now known as General Operation Force). These were quickly dismissed by the police even before an investigation was begun, causing a serious loss of confidence in the ability of the Sarawak police to act professionally.

In 2000, a report was also made to Suhakam but similarly there was no action.

Due to the vulnerability of these girls and women and the communities as a whole, we strongly and urgently call upon the Government and Suhakam to take these allegations seriously and set up a fact finding mission comprising of respected and qualified members who will be able to conduct the fact finding independently, fairly and competently.

In response, Deputy Chief Minister of Sarawak, Alfred Jabu Numpang, ticked off Tawie for highlighting the Penan's plight in his Broken Shield blog (click Global Voices Advocacy report here). Furthermore, the police investigation, conducted by the police headquarters in Kuala Lumpur as called for, found little or no evidence of rape.

Aside from the news that the the Women, Family and Community Development Ministry's special task force will have its report ready in December on the Penan rape issue, no new developments have occurred on this matter.

Sadly, the Penans have more than just the (alleged) rapes to contend with. The Sarawak Headhunter blog published a news report, which states:

The Penan’s protracted resistance to deforestation and the international attention the tribe continues to receive must have irked the Sarawak government.
The state government continues to dismiss their concerns over the loss of forest resources brought on by industrial logging that degrades the forest and pollutes the rivers.

At the height of the international anti-tropical timber campaign in the late 1980s, the state set up a Penan Affairs Committee to help the nomadic tribe to lead a settled life with promises of socio-economic development. The state announced allocations worth millions of ringgit.

Two decades later, the benefits remain elusive for many Penans. The rapid expansion of acacia and oil palm plantations eats into their ancestral land. To top it off, the natives are becoming illegals with many not having official documents. The Malaysian government is attempting to quell indigenous opposition to logging in the rainforests of Borneo by deposing community leaders and replacing them with timber company stakeholders, reports an environmental group.

The Bruno Manser Fund, a Swiss NGO that works on behalf of the forest people of Sarawak, Malaysia, says that the headmen of at least three Penan communities that have opposed logging have lost official recognition from Malaysian authorities over the past year. The government is working to install representatives who support logging. 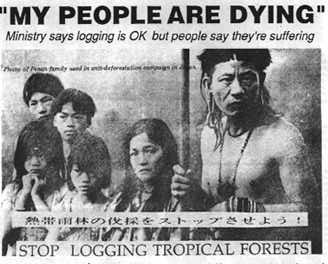 Over the next decade there is about 12 dam project in Sarawak alone. I am very sure that alot of native people's home has to be sacrificed but why so many dam's ? Most of the Sarawak is still covered by forest the power which is to be created is for who? Raymond Abin of the Borneo Resource Institute (Brimas) said , for energy needs in Sarawak, we don't need the Murum, because Bakun is more than enough to supply the state's needs.

Penan people are likely to be effected and I really think that building quite a number of dam's means that the will be a major loss of flora and fauna and loads more. I do understand we have to sacrifice something in order to get something better but, we can avoid making unnecessary sacrifice which will in the short term lower down the cost of spending, save the native people's culture and give them a life and in the long run there will be still flora and fauna where the new generation can experience so that they too can have a chance.

Photo courtesy of the Forest Monitor

All images were researched through Creative Commons.