On November 6th, the Himalayan Kingdom of Bhutan officially crowned a new King, who was appointed almost two years ago. The fifth Dragon King Jigme Khesar Namgyel Wangchuck is an Oxford-educated 28-year-old and the eldest son of the fourth and previous Dragon King of Bhutan, Jigme Singye Wangchuck. His coronation ceremony was attended by political heavyweights from neighboring India-including President Ms. Pratibha Patil and entertainers from Bollywood. 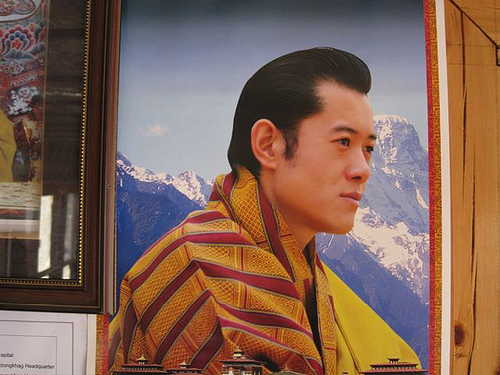 While Bhutan celebrated the coronation, the country and King Wangchuck barely remembered 100,000 ethnic Nepalese Bhutanese driven out by his father during the 1990s and now living as refugees in Nepal. In his message to the nation after assuming the throne, the new King promised to shield the country from “outside influence” but did not mention the refugees.

The region’s media was quick to pick up on the glaring omission. Taipei Times, India’s The Statesmen along with many others mentioned the refugee issue in their report on the coronation. Bloggers are also busy discussing the Bhutanese refugees living in Nepal.

Bhutan News, a non-partisan blog, informed just days before the coronation that the “refugees are in a state of flux”. Blogger Narayan Sharma expresses frustration over the long-overdue process of creating an environment where refugees can safely return to their homeland and blames Bhutan’s regime for the delay.

“Refugees’ hope of return has been lessened presently as the Druk regime has now the possibility to further procrastinate the issue with the new-found alibi of people’s representatives needing to decide the issue.”

Bibek Bhandari, a journalism student, wrote about the coronation and the refugee question for SAJAforum, mentioning the long history of ethnic Nepalese in Bhutan and that they were not exactly recent migrants.

“Approximately 103,000 Bhutanese Lhotshampas–descendants of Nepalese who moved to the southern lowlands of Bhutan in the nineteenth century–have been confined to several refugee camps in south-eastern Nepal since 1990. They have been forced to leave the country by the former monarch in the early 1990s during a campaign to impose compulsory national dress and ban the Nepalese language.”

Some bloggers are also discussing whether the recent decision to resettle the refugees in a third country will do any good and how moving to yet another foreign country might affect them.

At 510Report Adelaide Chen writes about the Bhutanese refugees resettled in Oakland, California who are trying to adjust to their new life in America by getting an education and learning English.

“Kharel and her sister are among the seven students from Bhutan attending the GED class several nights a week. She knows some of the other refugees, because they lived in the same camp for 17 years. Among the refugees from Bhutan that have accepted an offer to come to the U.S., few have expectations they will return to their homeland again.”

Maureen Sieh also writes about the refugees’ struggle to adjust to a new land. This time it is about those Bhutanese who have been resettling in Syracuse, New York.

“Hari Adhikari was a leader in one of the refugee camps. Now, he's helping Catholic Charities resettle some of the people he worked with in the refugee camps……He asks people if they have any problems with their apartments, budgeting and any other concerns they might have. He tells them that there are agencies here to help them, but they also have to be able to help themselves find jobs.”