Southeast Asia: The Power of the Pontianak

One of the most enduring legends of South East Asia is the Pontianak, said to be a bone-white lady, with ruby-red eyes, who is borne from her death in birth-giving. The Pontianak, or sometimes called the “Kuntilanak”, lives in almost all of South East Asia, except the Indochina region. Malaysia, Singapore, Indonesia and the Philippines have the blood-drinking ghoul in their folklore. According to the Chap Ayam Photographers’ blog:

“Pontianak” is one of the most famous, scariest and violent ghost in the Malaysian culture. Primarily, the Malays believe that it originates from a still born child, women who dies while giving birth, women who were killed by the pontianak or their spirits captured by them. The phrase “Pontianak” was believed from the acronym of “Perempuan Mati Beranak” in the Malay language, meaning the woman death by childbirth …Pontianak appearance can be deceiving. She would go out and fly during nighttime. She would look seductive and beautiful on the outside and would usually smell nice as well so that she can entice men. Once she lured in someone, the Pontianak would then turn into something hideous.

It’s not only men that are in danger from being victims of Pontianaks. Babies and women are not safe from Pontianaks. They are known to eat babies as well and would cause harm to pregnant women that might cause their miscarriage. According to legend, the Pontianak usually haunts lonely roads or leafy areas. According to the “Gambar Hantu” (Ghost Picture) blog:

Legend is that the Pontianak are afraid of sharp objects, as these can paralyse them, or cause them to turn into a beautiful woman. According to the Budak Jahat (Naughty Boy) blog:

So inherent is the legend of the Pontianak in South East Asian culture that a city in Indonesia is named after the ghoul.

Pontianak according to the fairy tale is a name of a lady ghost, who has along hair. Because there were a lot Pontianak ghost at the ancient time, so the people named this city Pontianak. Sightings of the Pontianak has never ceased through the years. About two years ago, two young Singapore soldiers were caught on video getting spooked by a Pontianak (see video below).

More recently, the recording of what is said to be a Pontianak even made it into the Malaysian Malay language dailies. In April 2008, many flocked to the historical town of Malacca. According to Yik Yang Nicholas on April 15th 2008:

For the past fortnight, droves of people have gathered at a bridge near Jalan Pulau Gadong, Malacca, where the 50-second video-clip was purportedly filmed.

Many stayed up to the wee hours of the morning hoping to catch a glimpse of the spectre.

The video clip, circulated via mobile phone, shows a woman with long black hair and clad in a white cloth floating in midair while whimpering.

A receiver of the video clip told the Malay daily that he had heard many stories about the pontianak.

Still, there are sceptics. The most common theory debunking Pontianak sightings is explained on the G.H.O.S.T. Club blog:

The barn owl, white in colour, often mistaken as a ‘Pontianak’, commonly found in cemetries.

The images above are so easily mistaken for sights of the paranormal, that more often than not, people imagine they have witnessed a ghost rather than rationalize that it was probably just an owl. I mean, afterall, don't we prefer to say that we have seen a ghost, rather an an animal? 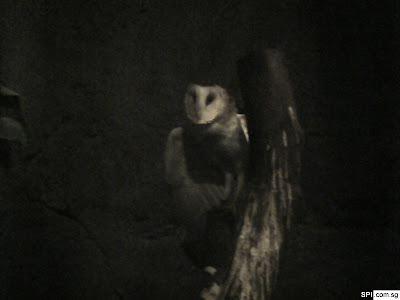 Still, the Pontianak lives on in the South East Asian imagination. Urban legends, like the following story, as related on the City That Never Sleeps blog, is one of the most famous stories around.

It seemed one late night on the old road to Genting Highlands, before the new road was opened, a couple, husband and wife were driving downwards heading home after having their holidays. After passing a tunnel, their car began to have some weird sounds. Curious, the husband decided to stop along the roadside to check on the engine. The road was deserted as it was late at night. The husband opened the bonnet of the car and began examining the engine with his torchlight.

While the husband was busy finding out what happened to his car, the wife sat quitely in the car waiting for him. Some 15 minutes passed by and the husband was still busy with the car. The wife just sat there patiently, she was beginning to wonder what took him so long. The eerie silence was a little too much for her as there was not a single sound at all.

Suddenly, she heard a loud motor sound coming towards her car. In need of help, she called out loudly to the motorcyclist, who happened to be a policeman. She was shocked as the policeman rushed to her with a panic frenzy, opened her car door, and ordered her to quickly jump onto his bike. The wife hesitated at first, but seeing the policeman was in a state of shock, she followed his instuctions obligingly.

Jumped onto his bike, she asked the policeman what was happening. He didn't reply her, but ordered her not to ever look back to her car. As they sped down the road, the woman took a peek at the side mirror of the motorcycle, and there she saw the most horrifying thing — a pontianak with long hair and dressed in white was sucking her husband dry in front of the car!