In a recent opinion letter to one of Cambodia's newspapers, Chak Sopeap, 23, voices her concern over a commercial television advertisement, which she believes affect the nation's culture.

Sopheap praises the government for the improved press rights and freedom of expression, but wants Ministry of Culture as well as Ministry of Information to ensure that all commercial TV ads should be properly monitored before going on air.

It's not the first time for the young human rights activist expressing her opinion through Op-Ed. But it was until last year when she joined Cambodia blogger community that all her letters (one of which is about Khmer Rouge tribunal), published in English-language daily newspaper The Cambodia Daily, can also be found on her personal Weblog.

I noticed a recent advertisement for Susuki Viva 2009 is problematic. This advertisement appears to target on sexy girls rather than on the Motor; its content is not consistent and affect the Khmer Culture and disvalue the woman.

Offending or not, Thomas Wanhoff, a German national commented on Sopheap's expressed opinion that:

If Cambodia wants to be part of the global markets, its has to accept one of the oldest rules in advertising: sex sells. But not only that: The whole pop culture in Cambodia is just a copy of what we now from Thailand. Where is the real culture? Look how especially girls are dressed up. Why are a lot of karaoke bars, casinos, night bars, named it. The reality is far from what you decribed not consistent.

This debatable point also appeared in a Cambodia related discussion board, and that a long-time American resident wrote an email saying that

I might suggest you try to get a picture of the offending ad – it doesn't have to be the worst part, or a good picture but it will support your argument. (I wonder if it is on YouTube?) Also, what station is running it?

Not surprisingly, Cambodia has introduced a number regulations and bans in attempt to improve social order as well as morality. Early this year, a song titled “I’m asking for one part of your heart” was requested not to be replayed on TV by the country's First Lady.

In 2006, fear of widespread of pornography among cellphone users, Cambodia blocked some features of sending digital video on 3G network service.

A year later, based on a request from National Election Committee, mobile phone text messaging was blocked during a weekend of 2007 local elections to avoid political unrest. ‘Details are Sketchy,’ a blog about all things Cambodia, has a response to the news article:

For starters, Khmer fonts for the average telephone are virtually unheard of. But, really, that’s besides the point. The fact is, an overwhelming majority of the Cambodian population is illiterate. And poor. So in practice such a ban would only effect registered voters who also own a telephone and can read English. That’s a pretty small group. Significantly less than 1% of the population. It is, however, exactly the kind of people that vote for Sam Rainsy. Still, it hardly seems worth the effort. 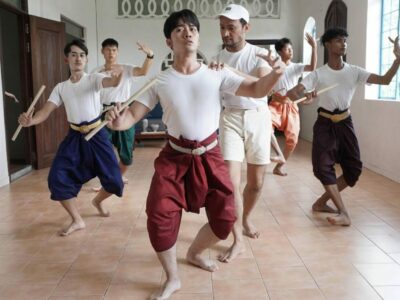