“It has been two weeks since Arifur Rahman’s cartoon “Naam” was published which prompted the Bangladesh police to take him to jail and lock him up without pressing any formal charges or allowing him any legal representation in his defense. Arif was picked up from his Uttara residence under Section 54 of Code of Criminal Procedure for drawing the very harmless cartoon that portrayed a widely used naming convention for Bangali Muslim men. The cartoon did not insult the prophet in any way, nor was it Arif’s intention, because his own first name is Mohammed (newspaper reports addressed him as Md. Arifur Rahman).” 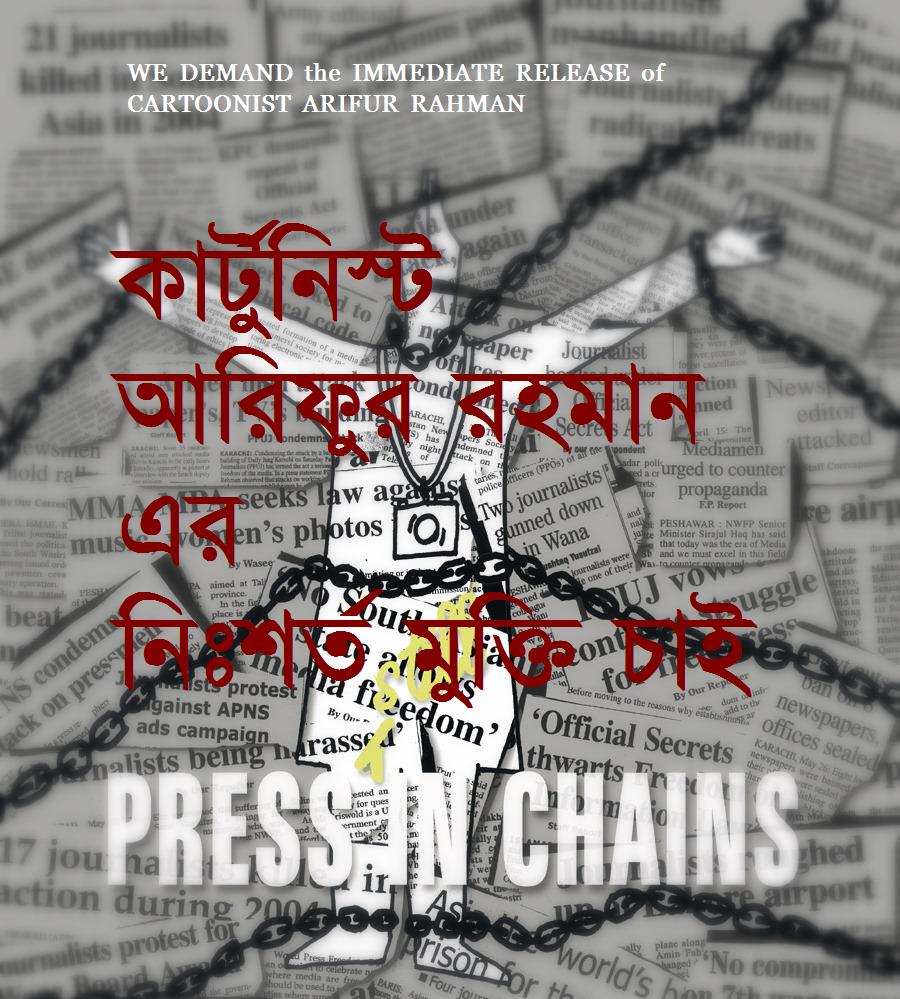 Arifur Rahman is just twenty three years old, who just a month before his arrest, received an award from the government for his cartoon against corruption. The editor of the Daily Prothom Alo apologized for publishing the cartoon but It is interesting to see that the political Islam has been keeping this issue alive and demanding ban of the progressive newspaper Prothom Alo. They have also targeted another popular magazine of Prothom Alo group called Saptahik2000, which had to take their Eid issue from the shelves as the Government banned it for publishing some words of a memoir of an exiled writer Daud Haider. The third world view and E-Bangladesh have more backgrounds on this.

The Bangladeshi bloggers are calling for an international campaign to free Arifur Rahman who was detained for his harmless statirical cartoon published in Alpin, the satirical supplement of the Bangla Daily Prothom Alo. It must be noted that Bangladeshi media are surprisingly silent about Arifur Rahman's release.

* Shourav created the splendid banner above and called for support. (Anybody can use it under creative commons)

* Mash at “Or how I learned to stop worrying” calls him the Bangladesh cartoonist hero.

- In the Middle of Nowhere who also asks to free Nurul Islam, the Bangladeshi aid worker (BRAC) kidnapped in Afghanistan by the Talibans.

Many international organizations demanded the release of Arifur Rahman:

“The play on words had no intention of attacking the Prophet,” Reporters Without Borders said “It was a joke about a cultural custom. The government should not yield to pressure from extremist leaders who are trying to politicize the case. Rahman should not be made a scapegoat. He must be freed.”

IPI would like to remind Your Excellency that the state of emergency imposed in January after the cancellation of the general election is not an excuse to restrict press freedom. With a general election planned for the end of 2008, it is vital that the country’s citizens have access to information and that the media is free to report facts and express opinions.

Please show your support for Arifur Rahman by putting the badge on your blog.

Join the facebook group to get the updates of this campaign.