After three years of peace following eleven years of civil war, Sierra Leone is engaged in concerted efforts to attract investors. The efforts, which are led by the the government of Sierra Leone and the the Department of International Development in the UK, involve a campaign, Sierra Leone: Back in Business.

Sierra Leone, like many other African countries, is guilty of “state led prostitution” in its attempts to bring investors back into the country, argues Sweet Sierra Leone. She writes:

When poor countries are trying to get investors they usually embark on what i like to call “state led prostitution”. The government basically has to prostitute itself and its resources to any one willing to bid (not even the highest bidder). This means giving tax breaks and signing deals that are more in favor of the foreign companies than national interest. In the name of privatization and foreign direct investment many African nations including Sierra Leone have been guilty of “state led prostitution”. The kind of investors who take deals from prostituting states generally do so to avoid corporate social responsibility or restrictions in other countries that are more in favor of national welfare. The tricky thing about state-led prostitution in countries like Sierra Leone however, is that the market is highly competitive. “It's a prostitute eat prostitute world” There is always the threat that another prostituting state in Africa or elsewhere could make a more attractive offer to the investing client. The question for states like Sierra Leone then becomes: “How can I make my country attractive for investment without embarking on state-led prostitution and preserving national welfare?”

However, she sees signs of hope and optimism in the form of corporate social responsibility, where companies like Celtel in Sierra Leone are investing not only in infrastructure but also in the people through campaigns such as Build Our Nation and Come Back Home:

Celtel Academy Freetown is a training academy that will bring “world class educational opportunity combined with the depth and speed of information technology and the internet” to Sierra Leone. If Sierra Leoneans are endowed with cutting edge skills then companies like Celtel will reduce their dependence on foreign expats. With this training academy, Celtel is making a decision to not only invest in infrastructure but also in people. Infrastructural developments are good but without skills, brain power, and leadership; buildings and roads will crumble and decay. Another example of Celtel’s commitment to Corporate Social Responsibility in Sierra Leone is the recently launched “Build Our Nation” Campaign. The goal of this campaign is to provide much needed school supplies and books to secondary schools in need. The company has set aside a total of Le. 450 million ($150,724) for the first year of implementation. Additionally, the “Come. Back Home” Campaign in an effort to recruit Sierra Leoneans and other Africans in the diaspora who are interested in living and working in Africa to join their corporate family. The company will be participating in career fairs in the UK and the US during the course of this year to make Sierra Leoneans aware of the opportunities available with Celtel.

Justin, who blogs at Live From Freetown, works for Mercy Ships in Sierra Leone. He writes about “the abnormally nice things that normal people do” in Freetown, the capital of Sierra Leone:

It amazes me that when I go to a person on the street and ask for help, the person will often go to great lengths to assist. It could be somebody downtown wanting to sell me mobile phone (and I’m looking for a less expensive model, therefore he goes on a mission to find one), or the woman in a small shop willing to lend me a bottle opener for a few hours with no collateral. Honestly, you’d be amazed at the abnormally nice things that normal people do.

But there is nothing nice about bureaucracy:

So today, after an exceptionally frustrating couple of days, I ventured into Freetown Cold Storage, also the home of the Swiss high commission. One of my colleagues is going to Switzerland to deliver a presentation to the UN in Geneva at the beginning of June, and we need a visa, and we need it stat.

I brought the form, the passport, the money, the invitation letter, and two passport photos. The secretary for the consular looked it over.

“You need another letter.”

“To say he works for Mercy Ships.”

“But he’s going on UN business, not Mercy Ships business.”

“It does not matter. You need to prove he is employed by you.”

“If I give you these, can you please start processing the visa while I fax you the letter today?”

“I can not process it until I have the letter.”

“Alright. How long will this take.”

“Between seven and ten days.”

“This is urgent. Can you process it faster please?
“The documentation is incomplete.”

“Yes, I know. And I will fax it to you. But is there any chance the process can be sped up?”

“Under normal circumstances, it takes between seven and ten days.”

“Yes, this is not a normal circumstance. He flies out on June 4.”

“No, his proposed date of travel is June 4.”

“No. I have his ticket here. The date of travel is June 4. That’s why I would like you to please ensure this goes as quickly as possible.”

“But your documentation is incomplete.”

“Yes, but let’s just pretend it isn’t. I’ll fax the letter once I get back to the office.”

“I can not begin until I have it.”

Paul is a volunteer with the Voluntary Services Overseas (VSO). What is a day in the life of a VSO volunteer in Sierra Leone like? Paul sheds some light:

The day begins refreshingly early since without electricity, retiring in the evening prior is also early. The dark silence is broken gradually by the call of the muezzin and then the church bells, the screech of the cocks and the barking of dogs as activity starts and the first light appears. Rising at about 6:30 I go for a jog around the local football field and enjoy the company of locals now almost a club of early birders. A quick trip to the well to gather the water for my bucket shower is followed by a breakfast of local bread and ground nut paste. By 8:00am I am ready to leave and the girls at St. Joseph school opposite my house greet me with the chorus of the national anthem before school begins. A brisk 15 minute walk to work at this time of day when the sun is low is comfortable and I wave to the passers by and answer in Temne to their greetings. Children shout “opporto” from the Portuguese derivative at the strange sight of a white person and I smile. I arrive at work in a lifted mood and think how different and more pleasant this is compared to turning up for work in Canada.

We stopped and continued on foot. Walking through some typical bush forest. Few villages, much forest, the rebels had a strong presence in this area during the war. It was also for most civilians, the only way to flee. The roads were too dangerous: too many rebels, too many soldiers, and too many problems.
Rashid was in an upbeat mood and happy to have taken a day off from ‘selling radios’. He didn’t get out much, had middlemen who take care of most things. I was surprised to only find women when I first walked out of the forest, and reached the river. This side was meant for washing gold, and it was here that the women were. On the other side of the river were the men. The men who were diving, digging and shaking gravel in the hope of finding some diamonds….
When the groups of diggers get bigger, roles become more flexible and groups work together. In the case of smaller operations (i.e. 4 groups of three to four men); first you worry about the gravel then about the shaking it. The shaking then only takes place in the afternoon. In the case of larger operations (i.e. 30-40 men), shaking takes place more regularly.

The divers are usually chosen men, the remaining men are ‘workers’ and the man overseeing operations may be called ‘miner’. There is no fix terminology, but a miner is often the man who has the license, the manager could be a boss who doesn’t have a license (i.e. directly working for the supporter, often a Lebanese).

Diving is difficult and divers command more respect. Some men told me about their wish to become divers, seen as a little higher at what is the bottom of the diamond chain. I did ask two divers what they felt about diving and health. They didn’t see any major problems with this, although diving for such lengths of time on a daily basis must have some effect on the man’s health.
Steven, one diver in the pictures had just come back up from his long dive. It took 15 minutes before I spoke to him; he was still under the shock of the temperature difference. Smiling as often, we exchanged greetings. He like the others was happy that this was a Thursday and the Friday would be their day of rest.
Some of the men spend one to two hours at the bottom of the river. Usually four to five fathoms or fader (1 fathom = 0.9144 metres, any suggestions on why people in Salone still use this unit of measurement?), depths, that increase as the first rains set in. A pump ensures that the diver gets the necessary oxygen. A long rubber tube that passes through an empty gas container, and attached to the pump facilitates the sending down of air.

Much of the diamonds passed through Koindu to be brought to Monrovia. Issa Sesay, Sam Bockarie (aka Mosquito),and Gibril Massaquoi, amongst others, were heavily involved and Charles Taylor seemed to have the right contacts. The rest (much smaller) was bought on ‘fly-ins’, foreigners flying in, buying stones, paying the right man to remain silent, and flying back out. Alternatively also through smuggling. In this regard, Blood Diamond did get its story right. An action film, a Holywood thriller, a film that could be sold to the masses in Europe and North America. The frustration I shared with many was the image it portrayed of this country at present. The past must not be forgotten but this was not really the ideal image to be portrayed of a country in the middle of registration for presidential elections. Yes the blood diamond awareness campaign was important, but the least Leonardo and company could have done is to have flown to Salone and to come back reporting that it is back in business. 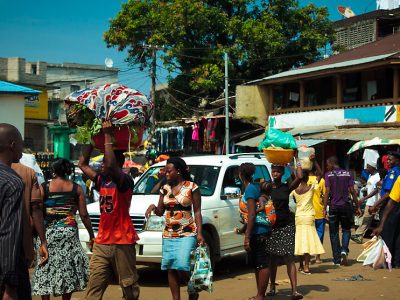