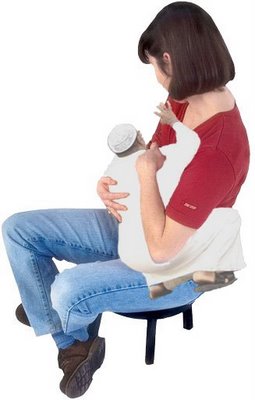 Imagine having to breast feed your colleague at work – five times – to ensure that your relationship remains professional! This is the fatwa (religious edict) that had Arab and Muslim bloggers buzzing with excitement and anger this week.

According to news reports quoting the Associated Press:

Ezzat Attiya had issued a fatwa, or religious edict, saying adult men could breast-feed from female work colleagues as a way to avoid breaking Islamic rules that forbid men and women from being alone together.

In Islamic tradition, breast-feeding establishes a degree of maternal relation, even if a woman nurses a child who is not biologically hers. It means the child could not marry the nursing woman's biological children.

Attiya – the head of Al-Azhar's Department of Hadith, or teachings of the Prophet Muhammad – insisted the same would apply with adults. He argued that if a man nursed from a co-worker, it would establish a family bond between them and allow the two to work side-by-side without raising suspicion of an illicit sexual relation.

And since such an idea amounts to sexual harassment – forget the giggles and ridicule, AP reports that Al Azhar University was quick to revoke the ruling.

Al-Azhar University, one of Sunni Islam's most prestigious institutions, ordered one of its clerics Monday to face a disciplinary panel after he issued a controversial decree allowing adults to breast-feed.

For Naseem Al Tarawnah from Jordan discussions about the fatwa caused his “hairline to recede half an inch.”

I’ve had a run in with at least 3 debates on TV this week causing my hairline to recede half an inch. People literally wasting their time on a round table debate about this topic. Even so much as debating this issue, giving it an ounce of credibility, is like arguing with a drunk.

My generation is suffering from fatwa withdrawal. We either accept such idiotic “laws” as Islamic and thus swing to the farthest depths of the right or we are so disgusted by them that we become unattracted to religion and reject it forthright. I don’t deny that there are outer forces at work with an anti-Islamic agenda but the forces within are more troubling.

There was a time when Islamic universities accepted only the brightest people and even then they were doctors, chemists and poets; pushing their respective fields along within Islamic thought. Instead, we have this now. Maybe there will come a time when a student requires a 95% average to even be considered for Islamic scholarship. It would be a giant leap from the current prerequisite of just being literate (barely) but I think it could happen.

See these guys at Al Azhar University may seem like they have too much time on their hands, but in fact they are not sitting around twiddling their thumbs; they are working hard on coming up with Fatwas to help Muslims deal with some of the challenges facing them in these challenging times.

So the latest Azhar fatwa, ingeniously thought of by the head of the Hadith section at the university who argues it's based on a Prophet's strong Hadith (sayings), is trying to solve the problem that in this darn age men and women are spending time alone together at work when that is forbidden. The solution? Easy! The problem can be easily solved by having the woman nurse her colleague. Yep. Nurse him as in put her breast in his mouth. This way they become related through nursing and as such can be alone together without breaking any moral or religious codes. But they need to keep accurate records of who nursed whom so things don't get mixed up. Once a man is nursed by a woman, she can take off her veil in front of him because now he's “forbidden” to her.

From Bahrain, Mahmood Al Yousif jumps on the bandwagon, saying the fatwa was an insult to Islam.

What the right dishonourable twat issued his fatwa that should a woman share an office with a male colleague, which is haram (verboten, forgetaboutit, nowayjosé, gostraighttohellanddonotpassgo), as unmarried males and females should not mix, she must be accompanied with a chaperon, or she should breast feed that adult male five times in order for their unchaperoned existence together be Islamically lawful, halal!

How about that for flexibility? Who said that Islam was a rigid religion?

Now. I would not be surprised that men all over the Muslim world standing erect while a queue of women pass by, boobs hanging out and breast feeding the line in order to protect their rights and allow them to live in a halal environment with men.