Morocco: The Week of Firsts

This week in the anglophone Moroccan blogosphere, much ado was about Rachida Dati, France's first North African Justice Minister, appointed on May 18. Dati is a 41-year-old lawyer whose father is Moroccan and her appointment is causing quite a stir – on the one hand, it demonstrates that minorities can make it in France, but as Liosliath says, “Ms. Dati’s parents wouldn’t even have been allowed to enter France under Sarkozy’s proposed immigration policies, and that’s just one of the reasons I find her so hypocritical. She’s pursued Sarkozy for years, begging to be part of his team – obviously morals are trumped by career ambition in her case.”

The View From Fez reported on the Moroccan reaction to Dati's appointment:

While many in France have applauded Rachida Dati's rise to power as French Justice Minister, the reaction of the Moroccans and many in the French community in Morocco has been muted. “She has no experience and is just there to look good,” said one cynical commentator.

Maghrebism first asked, “Why can’t an immigrant child share the same views as Sarkozy?” The blogger then argued for Dati, saying:

Rachida Dati, as an individual and immigrant-child, has all the right to agree with Sarkozy’s policies. And Sarkozy has all the right to appoint her, without being accused of looking for a posterboy(girl). Maybe he has the same reasons for appointing her as the leftist politicians. Because of her experience and abilities.
Somehow, immigrant and leftist groups find this hard to believe. Only they can claim to have the true immigrant-politicians. All the other ones are just poster boys/girls, traitors and weirdos.

This fetishism is ridiculous and restrictive. It’s time we start realizing that not all (second-generation) immigrants are the same. That we don’t share the same values even though we share the same background. 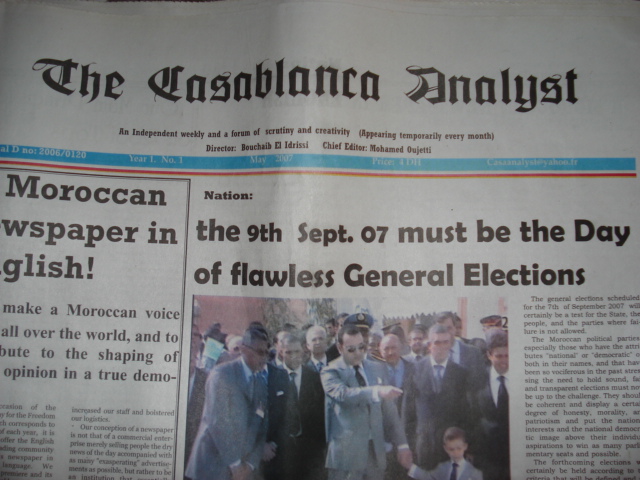 It turned out to be a week of firsts – after the news of Dati's appointment broke, another news story – rather, a newspaper came to light. Before this week, those wishing to read Moroccan news in English could choose between the state-run news website and a U.S.-backed site. With the release of The Casablanca Analyst, a new independent weekly, this is no longer the case. The View From Fez reported first, saying:

For only four Dirhams the reader is offered poetry, analysis, news, comment and a book review. Sections of the paper are devoted to Moroccan national news and comment, analysis of world affairs, opinion pages, culture, language and communications, literature and so on. It is a heady mix and certainly provides several hours of enjoyable reading and contemplation.

The Morocco Report also praised the newspaper, quoting from its pages and saying:

My students remarked that the editors are indeed quite ambitious, and I don’t disagree, but that kind of confidence is what they’ll need to succeed in a country where even the most popular newspapers only sell around 100,000 per issue (Morocco’s population is 31 million), and where few people speak or read English.

And yet, I’m impressed, because not only are the articles original, but the writers seem to remain true to their identities, claiming their perspectives as Muslims, humanists, pacifists, environmentalists, nationalists, seekers of truth, democrats, lovers of literature and the arts, militants for freedom and economists (not in that order).

And for one last exciting first, Cat in Rabat posted about what is probably Morocco's first wine outlet: “Its location on this particular street … in this particular neighbourhood of Agdal … in Rabat … in Morocco for that matter … was about as incongruous as a Carmelite nun at an Al Qaeda bootcamp in the foothills of Afghanistan, but there it was.”