With the increasing popularity of blogging comes a debate about how to represent one's country, or in many cases, the country in which one is currently living. Many of the English-language blogs based in Morocco are written by foreigners, who call the country their home. Still others are written by Moroccans, many of whom live abroad. The result is a discussion of how to portray Morocco which crosses borders and nationality.

Everything Morocco introduced a new blog from Fez, saying: “…Slip off those sepia-tinted specs for a minute and take a look at 21st century Morocco through the eyes of someone who lives there.”

The blog in question was Fes: The Fake Blurry View, whose author introduced the blog by saying:

I think that it’s difficult for foreigners living in Morocco to see the real picture of life in Morocco Fes in this case. Unfortunately, there are a bunch of foreign “experts” in Morocco who try to represent what is authentically Moroccan… the other. The outcome is so weird. You end up thinking, reading their b!@#s@#$ that in Morocco, it’s all about being a “sufi” (whatever that means) and it’s all about history, tradition and medieval practices…

These fellas wouldn’t admit that in Morocco people drive cars, take trains and planes… that Moroccans … are just as modern as they are. They insist that Moroccan culture should be as they see it, as if lived out through a series of postcards.

Also on the subject of slipping off “sepia-tinted specs,” The View From Fez had a guest blogger, Australian television journalist David Margan, who wrote of Fes:

It is mysterious place only because of our ignorance and the pleasures of myth and imagination; to read its history and watch its ways is to discover it is simply a living city like any other. Simply watch the gaggle of school kids running, laughing, teasing grins as broad as the sky; the girl walking slowly immersed in animated intrigue, its no different from the village green, town square or road in your town.

…This is Fez. Morocco. Fez now… and may it continue to prosper and grow – insh'allah. 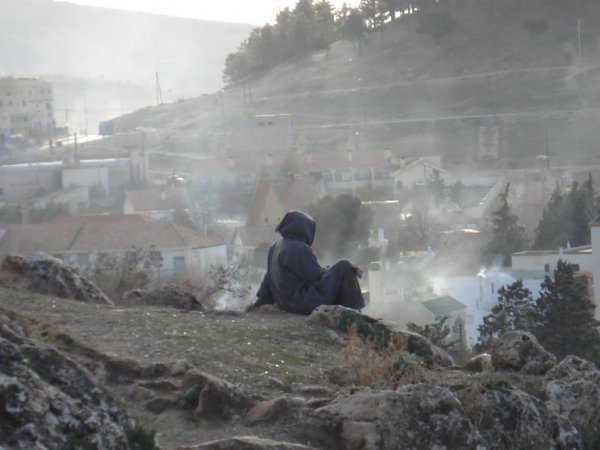 In Move It Or Lose It, a Tangier-based blog, the author writes of representing Morocco through photography, and the challenges that go along with it:

Braveheart Does the Maghreb echoed the sentiment, saying:

I am amazed that in a Muslim country none (a rash generalization, I hope there are some) of the tourists ask permission to take photographs. The Muslims, especially on holy days, do not want their photographs taken. I don't want my photograph taken! The children are always ready to pose; but one should still ask.

Finally, in the realm of print media, Myrtus remarked that “Mariane Pearl, the wife of American Journalist Daniel Pearl who's been murdered by radical Islamists, travelled to Morocco on behalf of Glamour Magazine to do a special report on the plight of unwed Moroccan women,” recommending the article, available online.