There was a proposal put forth recently at one collective of Chinese to English translation bloggers for people to consider making use of Dotsub.com to subtitle cell phone and digital camera-shot video posted online. What would people outside China be interested in seeing? Something with action? How about protest? Is there enough self-shot footage online at this point to support a Chinese protest net channel? A spur-of-the-moment search for the word ‘protest’ (kang yi/抗议) on Youtube and one of its Chinese counterparts, Tudou, quickly brought up the following results, among many others:

Uploaded on May 7 by an anonymous user and dated April 5 is video of the ruckus ensuing after someone has been apprehended at a department store in an unspecified city, and security guards of various sorts have been called in. The majority of the dialogue is in the local dialect, but standard Mandarin is spoken in several parts. At 2:50 one sees what this Tudou user has labelled a thief splayed out on a sofa and not moving, and someone says ‘let's take him to the hospital to get checked out.’ At 4:00 someone suggests the police be called in to control the situation. At around 5:00 the woman sitting on the floor can be heard yelling quite angrily. When one security guard can be seen giggling a few seconds later, she yells “what are you laughing at?” By 6:00 what appear to be police—one filming the scene with a camcorder—and a doctor have appeared on the scene and at 6:57 the immobile thief is carried away on a stretcher. The clip ends with the person filming the event's recording device having been turned upside-down.

Do you recognize the dialect? The only other indication as to the location is a news report from a television station in Xiamen, Fujian province, uploaded by the same anonymous user.

A user with a keen interest in coastal Chinese shopping malls, it seems. An 8.5 minute-long clip was uploaded the same day and labelled the evening of April 23, shot from within a near-empty department store. One's left wondering why no comments have been left explaining the situation. A large group of security personnel are standing around. Just after 4:00, someone says, “let's go, let's go,” followed shortly after by a “be careful.” The short appears to have been filmed surreptitiously, perhaps by one employee at the department store. At 6:35, one security guard looks to be staring straight at the camera and takes a step closer, but then turns away. A pan shot at 8:00 shows one woman standing in a dark corner touching her face. Applying make-up? Crying? The same Tudou user has uploaded a news report on the story from a television station in Wenzhou, Zhejiang province which features interviews from shop owners at the shopping center who say they came one day to find the building locked tight and all their merchandise in with it.

Two more clips also uploaded May 7, from April 24, one showing the post-demolition interior of the shopping mall and another purportedly from that evening which shows a wreckage crew of migrant laborers being escorted out of a rubble-filled department store by baton-wielding police. Again, no explanation provided.

Also from the same anonymous Tudou user is a video uploaded May 4 which seems to be of the May 1 Labor Day opening at the newly-renovated Dongbai department store in Fuzhou, Fujian province. Again, no additional information is provided. Lots of police and various types of security guards can be seen. A smashed glass display case. At 3:30 one sees a middle-aged woman lying unconscious on the floor with four other visibly-upset women. The next scene shows a group of women—shoppers?—arguing heatedly with what could be department store management and many shoppers, security guards and police standing around watching, with at least one filming the proceedings. At 4:30 a woman's voice can be heard saying someone had no reason to have hit her—the woman knocked out cold on the floor?—and towards the end the crowd's anger turns to one of the members of a group of young men in white shirts coming down a flight of stairs.

Prior to all those, though, and carrying on with the shopping mall theme are three shorts from Tudou user ‘I'm a shopowner’ simply labelled ‘April 13 Conflict,’ uploaded April 17, parts 1-3. Which department store these concern is not made readily clear. The first short shows a large crowd trying to force its way into a shopping mall. In the second a white banner of some sort is tied to the door, and police can be seen standing inside. In the third, one's left waiting for the conflict suggested in the title to appear; police can be seen leaving and the crowd seems light-hearted enough, joking in the local dialect that the security guards remaining inside can't understand what people are saying to them. The only clue to the location, aside from the April 17 upload date, comes near the end with the words ‘Jin Ying’ seen on a ripped poster.

Which ties in to the last two clips, dated April 17, uploaded by ‘I'm a shopowner’, of a protest by business owners at the Three Gorges shopping plaza in central China's Chongqing Municipality.

The first clip shows 36 people carrying a long banner and others handing out printed information, yet others leading the procession in protest chants. The banner reads:

Jinying Women's Street, We want to eat, We want to live, To uphold our common interests in accordance with the law, To be resolute in not letting the demolition continue, To strongly protest Zhongfei Ltd.'s unilateral termination of the contract for their own personal gain, [To protest their] vile behavior undermining of stability and the construction of a harmonious society.

There's at least one blogger who was inspired to write about it, Sina blogger 99YangYang who on April 8 wrote that the shopowners claim their rental agreement has been altered prior to its January 30, 2008 expiry date, and that word on the Jinying Women's Street is that they're all soon to be evicted to make way for a Metersbonwe outlet. 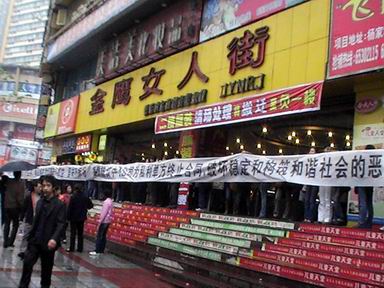 99YangYang's photo from the steps of the Jinying Women's Street

The other clip from the Women's Street, whose title suggests the shopowners are being paid no attention, shows the banner now having been stretched out front of the city government building and a second banner, which reads:

Punish the dark forces which are beating and killing people, Uphold social justice.

Murder, even. But how to verify?

Did Zola, China's first citizen blogger, since turned full-time investigative independent blog-reporter [zh], piggy-backing off the intense nation-wide attention being paid to The Nailhouse bring independent media consciousness into the second-tier Chinese city? It used to be that video of this sort could only found having been shot along the coast in places like Guangdong and Zhejiang provinces.

Now the most effortless of searches on Youtube brings up a short snippet from a protest by 500 coal mine workers having taken to the street, banner and all, in Nanchang, capital of the economically-weak Jiangxi province, dated May 9. No further information provided, however.

Same with the video shot of residents of the Wuhanhua building in central-southern China's Changsha, capital of Hunan province, fending off the guards sent to forcefully evict them, uploaded April 16.

Or the stirring music video with the Soviet feel of Chongqing cotton mill workers having come out en masse to protest the government's arrest of those bargaining on their behalf, sure to gain at least a few viewers in the West if it just had English subtitles written onto it: