Arabeyes: The Middle East in Pictures 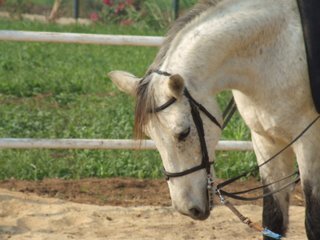 Nothing is more difficult to deal with than the loss of a dear one and Egypt-based blogger Maryanne Stroud Gabbani her ordeal as she bids farewell to her horse Blue Boy in these pictures.

“One of the hardest parts about caring for animals is the day that inevitably comes when you must say goodbye to an old friend. Almost a year ago the last Czech ambassador to Egypt and his wife gave me their lovely grey gelding Blue Boy to care for. Blue Boy was one of those Arab crosses that look like they have maybe some draft in them, and they are often used for jumping and dressage,” she writes.

Following a sudden illness, Blue Boy died before the vet arrived. Gabbani was then left with the problem of burying him.

“Burying something as big as a horse is seriously problematic in an area where the water table is only about a metre and a half under the surface of the soil. If we were to bury him in the farmland, and bury him as deep as is appropriate, the last two metres of the hole would be underwater and the water in the area would be over-fertilised, killing plants all around. One of our neighbours had a bulldozer at his property, so he drove it over to pick up the horse and to take him out to some old gravel mines where he could be buried,” she explains.

Needless to say, Blue Boy‘s departure dampened the spirit of everyone on the farm.

“The next day all of the animals on the farm were very quiet…much less playful and silly as though they somehow understood that a member of the group was gone. Indeed they should have understood as he was within sight of all the animals during the process,” Gabbani notes. 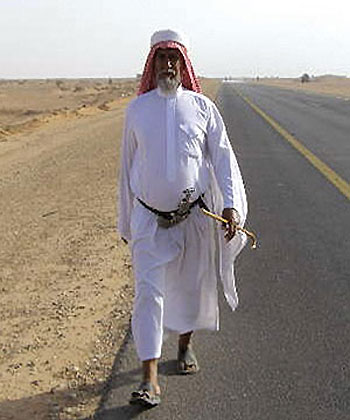 In Saudi Arabia, this 73-year-old man is expected to walk 1,000km to thank the Saudi King for intervening in finding a solution for the in-fighting between the different Palestinian factions, according to blogger Asad Abu Khalil.

Asharq Al Awsat reports: “Salim Musfir Owaida al Qahtani has embarked on a journey of a lifetime in order to express his gratitude to the Custodian of the Two Holy Mosques, King Abdullah bin Abdulaziz, for his role in resolving internal Palestinian fighting between the Fatah and Hamas movements and his contribution to the Muslim and Arab nation. The 73-year-old father of 28, who has four wives, has begun a walk from his village of Ain Qahtan in the Aseer province to the Saudi capital, Riyadh.”

From Saudi Arabia, we move to Qatar, where this man is making heads turn, thanks to the modifications he has made to his car.

Meanwhile in Yemen, Omar Barsawad isn't pleased with witnessing the changing face of the seaside town of Mukalla, whose architecture is changing abruptly with the erection of new ‘soulless’ structures – made up of slab, steel and glass only.

“In the Arabian Peninsular, there seems to be an enormous fascination with Dubai. Be it Abu Dhabi, Doha, Manama, Muscat – all are in one way or the other copying or imitating some aspect or way of Dubai. Mukalla is no exception. Does Dubai have character? Let's say, like Cairo or Fez or Tunis or Damascus or Amman? With the all steel, concrete and slab that Dubai is, and it looking more and more like Disneyland – it will take long, for it to build one: a character. With the ripping off, of Mukalla's old character and beauty – how long will it take, for it to have a new one. A character with a ‘soul’ as pleasing and as refined as the old one? A new one as aesthetically beautiful as the one now being torn up?” he notes.