The Moroccan blogosphere was suspiciously quiet this week as temperatures rose and sandals came out of hiding. Everything Morocco explained the spring phenomenon in Fez, describing its wonderful seasonal foods:

There are a lot of reasons to love Spring in Fez. Fava beans – Moroccan cooks make a special couscous when fava beans are fresh and abundant. The couscous grain is larger and darker than the standard couscous and the dish has a rich, subtle flavor with just a bit of meat added to it. Beqola – this ‘weed’ salad may be an acquired taste, but I think it falls in the category of soul food. It's the kind of food you crave when it's not around anymore. 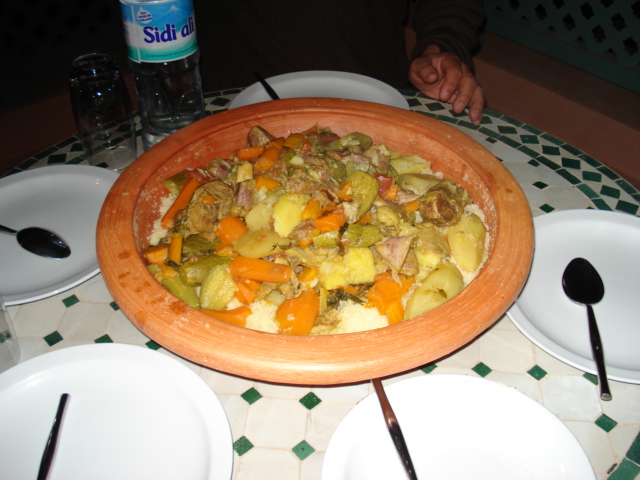 Springtime in Morocco also brings tourists. Maryam of My Marrakesh discusses springtime fashion in Morocco, meanwhile giving good advice to tourists on how to dress. She mentions the Moroccan djellaba, describing it as “the long Moroccan hooded robe reminiscent of Star Wars. (Ahem, the film stole its stylistic inspiration from Morocco and not the other way around.)” Her advice to foreigners (“Short shorts and short skirts really are not appropriate daywear”) sparked a bit of debate from Moroccan blogger Amine of Label Ash:

Is the “to the knee” rule not too… excessive? :-)
Whether in Marrakesh, Casablanca, Rabat, you find girls and ladies walking in the street wearing shorts, and they are not necessary on their way to the beach or the swimming pool…
That's the heterogeneity of Morocco: you can find women with scarves (… grrr) but also very pretty girls wearing clothes and you would see them in any Western Country…
Even more as a tip for foreigners, I trust Moroccans tolerate more the “Western style” without any prejudice…
Am I wrong?

Taamarbuuta of The Morocco Report wrote a short commentary on an article entitled “Netherlands: Moroccan babies get only names approved by Morocco” from the Islam in Europe blog which stated that Dutch municipalities give new Moroccan parents a list of names approved by the Moroccan government when they want to register a birth.

Francophone blogger Ibn Kafka responded in the comments of the post that there are loopholes to the naming process:

For the sake of example, you may perfectly give your child Dutch names when registering him with Dutch authorities, and Arab names when registering him/her with the Moroccan consulate. Even better, you might give him/her dual names, i.e. a Moroccan name and a Dutch name – while the Dutch authorities would register both, the Moroccan authorities would be perfectly content to register the child under his Moroccan name.

The last noteworthy piece this week is a post from The View From Fez chronicling the opening night of the Sufi Festival of Fez in photographs. The View's Samir lauds the festival, saying “All the extraordinary contradictions that one expects in Fez were there – musicians in suits, tinkling fountains, a robed man dispensing orange-flower water on the hands of the guests and everything working like clockwork!”