Google seizes up before any results appear in a search for ‘Celil,’ ‘Canada’ (in Chinese) and ‘2007,’ fitting given that a proxified search turns up no Chinese language media reports from websites that can be readily viewed within China. It's a different story, as usual, for a Google search which includes the word blog. The controversy surrounding the identity and fate of Canadian citizen Huseyin Celil, originally from China's largely muslim northwest, was revived this past week when he was sentenced to life in Chinese prison.

Celil's previous stint in Chinese prison ended in 2000 when he broke out and fled West, soon landing in Canada where he went on to gain citizenship. Two questions around which the controversy revolves: does the Canadian government not worry about granting citizenship to Chinese criminals, or is the Chinese government making these charges up? 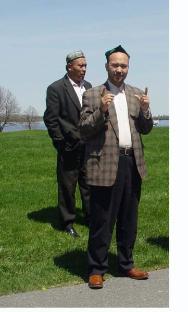 Speaking strictly by percentage, rabid nationalistic discourse tends to dominate online discussion in China, but the reason so little of this is reflected here at Global Voices Online is that one hopes to engage in balanced conversation, but in the Celil incident, this week at least, all the bloggage this blogger was able to find leans heavily in the Chinese government's favor. For example, random comments on blogs found in the first two pages of results in the search described above:

From the military bbs at China.com, netizen Son of the South on April 20:

From the Dragon's Dream Sina blog whose readership jumped to over 1,700 with his post on the affair, netizen East China Sea Scholar on April 21:

Traitors, we must be steadfast in eliminating them.
If they don't shoot him, it's because the state's being too merciful…and what will be left?!
Canada, bastard country, why don't they extradite Lai Changxing? Even if hadn't taken off with sixty billion RMB they should still give him back…and they still dare speak to us…Canada should be a country Chinese people despise…at best make it shut up.

From the military affairs blog at China.com, which had sixteen pages of comments, netizen Bright Point of the Sun on April 22:

Canada, go die! You're not qualified to tell China what do to. Your Prime Minister is a piece of trash.

One can be shameless, but not to this extent!

So cold I awoke at midnight, thinking of all the noise being made between China and Canada over the Celil Huseiyn case, tossing and turning. At five in the morning (6pm Beijing time) I got up, ate an apple, and went online to read up on the case.
As a practicing lawyer, I'm used to hearing completely different versions of a story from each side, and am not quick to believe one side's statements over the other. So, when I got up today, first I went over some of the earlier information sources, and then thoroughly familiarized myself with the the stances taken by the two countries’ governments, China and Canada, and especially the information put up on the website set up by the accused's family (hereby referred to as “the Celil site”). After having read all this, I can say I'm brimming with fury as I write this blog entry.

Summing up all the various information, particularly the facts the Cecil site takes the initiative to admit, a rough outline to this case goes as such:
The accused, Huseyin Celil, was born in Xinjiang, China, and belongs to the Uighur racial minority, but declares himself as having been born in East Turkestan, belonging to the East Turkic people, and as a member of the East Turkistan Islamic Movement. The East Turkestan Islamic Movement, or ETIM, is considered by the United Nations as a terrorist organizaion. The ETIM strives for Xingjiang separation, as the Celil site makes no effort to hide. The Chinese government maintains that the ETIM and Al Qaeda organizations are inextricably connected and have both in Xinjiang and further inland created numerous explosions and bloody conflicts; thus, according to mainland Chinese law, no effort is being spared to strike down the ETIM.

被告曾被中国政府逮捕，2000年越狱。中国政府迅速通过国际刑警组织，发布红色通辑令，全球辑拿。被告在通辑期间，辗转逃至加拿大。加拿大政府于2001年接收其为”难民”，并于2005年接收其入籍。被告入籍加拿大以后，有恃无恐，于2006年3月持加拿大护照赴乌兹别克时，被当地警方以涉嫌恐怖活动为由逮捕，引渡回中国。现本案正在（中国新疆）法院审理中。
加拿大政府以被告为加拿大公民为由，要求为其提供领事保护。中国不承认被告的加拿大国籍，严词拒绝。加拿大政府总理说，他的政府相信，没有明确的证据证明，作为少数民族权利的主张者，被告犯有或参与任何被指控的罪行。（Harper said his government believes there's no clear evidence that Celil, a minority rights activist, has committed any crimes or participated in alleged terrorism.）加拿大政府以中国政府侵害人权等理由，把”人权”、”自由”的口号喊得整天响，在外交层面对中国政府施加种种压力。
现在，加拿大方面最强的理由，就是中国国籍法不承认双重国籍。被告加入加拿大国籍以后，自动放弃中国国籍。因此中国方面，对本案无权管辖。

The contention at the legal level might be too technical, so let's put that aside for a moment. Let's consider this from a different position: say bin Laden had fled to some country in the middle east, Iran, for example. Now the Iranian government accepts him as a refugee, offers him political asylum, even grants him citizenship. Say then that Mr. Laden is now a full-fledged Iranian citizen and that their government believes there to be no evidence proving his participation in terrorist activities, that no countries on earth should even dream about ever touching him again! How would the Western world, including Canada, respond? I bet you America would dispatch troops like hell, destroying Iran ten times over! And Canada? You think they'd so much as make half a fart about it?

The Canadian Prime Minister says his government “believes” there to be no evidence proving the accused's guilt, so it seems this makes everything they say and do excusable. What a joke! Since you haven't seen the evidence, what exactly are you “believing”? Putting it another way, the World Trade Centers were blown up by bin Laden, but where's the proof? Iraq has large-scale deadly weapons, but where's the proof? I'm even willing to bet that the evidence of the accused's manufacturing of terrorist cases inside China amounts to more than the evidence implicating bin Laden and Saddam put together! Now the whole world knows that it was bin Laden's Al Qaeda behind the World Trade Center in New York, and Saddam has been done in by America: why didn't Canada object? Why didn't Canada take the two of them in as refugees, as citizens, and then provide them with political asylum, giving them passports, letting them go on spreading rumors? One can be shameless, but not to this extent!

For a balanced overview of the development of the dispute between the Chinese and Canadian governments, journalist-blogger Susanna Ng in Vancouver, Canada has been tracking the story on her Chinese in Vancouver blog, and her most recent post on the subject, dated April 21, ‘Embarrassing Canadian foreign policy,’ looks at the Canadian government and particularly its current leader's response to the Celil incident in comparison with that of another Canadian citizen also recently in diplomatic hot water, which reads:

This Egyptian case has so much in common with Celil:

* both are alleged of harming their home countries’ security and integrity
* Israel is the Harperites’ good friend whom should be supported “unconditionally”; and Harper's China policy might have been dictated by people who lobby for an independent Tibet (ironically, the Dalai Lama has announced that he's not interested in an independent Tibet any more)
* both men say they're innocent and are tortured into confessions; Canada has no way to prove it but jump to hoist the human rights flag
* Arab countries do not like to be criticized in public
* China is more ready to cooperate if talks are behind the scene