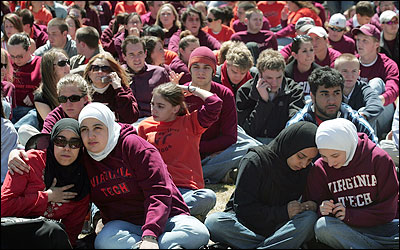 For Algerian student Nouri, who studies in the US, the shooting at Virginia Tech is too close to home for comfort. He links to the above photograph, from the Washington Post, which features one of his acquaintances, who goes to school there.

“The brown fellow to the right, just above and between the two girls in headscarves is a fellow named Khaled, who is also an Algerian. While 30 people were killed (including two Arab-Americans), it is good to know he is not hurt, and that the ordeal's bloodshed is done with,” he writes.

Arabisto bloggers are also giving the incident blanket coverage, especially that three of the victims are Arabs – two of Lebanese origin and an Egyptian Phd student.

The other victim of Lebanese origin is Ross Abdullah Alameddine, 20. Lebanese blogger Jounoune updates us about how the two Lebanese families are dealing with the shock in this link to a newspaper report.

Nadia Gergis , who also writes for Arabisto, links to an interview with Reema's father.

“A sad interview with Joe Samaha, the father of Reema Samaha, has been posted on MSNBC by reporter Stone Phillips. Seems like the school didn't inform the Samaha family of the shooting. We've also learned that her parents Joe and Mona Samaha, are graduates of the American University in Beirut.

“We've are also learning from the New York Times of another victim of the shooting, who seems to be from Egypt. His name is Waleed Shaalan,” she writes.

And while the shooter was not an Arab, Gergis reports that a Palestinian student at the university took footage of the massacre using his cell phone camera.

“I am sure I am not alone in my thoughts today.

When I heard about the shootings at Virginia Tech, I said to myself at work today, “please, please, please don’t let the shooter be Arab.” I kept walking by the news praying that the anchors on CNN would not say, “could this be the act of a terrorist.”

While the killer’s name hasn’t been released, CNN reports that he might be Asian. I am relieved. Isn’t that horrible, I am relieved that he is Asian and not Arab,” she admits.

But there was an Arab all over CNN today. His name is Jamal Albarghouti, who recorded shots being fired on the Virginia Tech campus through his cell phone for CNN’s iReports.

All we know about Albarghouti is he is a grad student at the school. Today, he shows us the future of citizen journalism. His footage was broadcast by several major television networks and he was even a guest on Larry King Live on Monday night.

Despite all this, Gergis says there were some attempts to link the massacre to Islam.

And I quote from Fox: “He apparently had scrawled the words “ISMAIL AX” on the inside of one arm, which may be a reference to the Islamic account of the Biblical sacrifice of Abraham.”

The haters have already started blogging on this. I knew it would only be a matter of time.

She admits that the shooting didn't raise her curiosity, until she realised there was an Egyptian among those killed.

“To tell you the truth I didn't pay much attention to the massacre that happened in the Virginia Tech ,yes it is horrible and I felt so sad to the families of the victims and angry that they lost their beloved ones because some crazy manic But I felt even more sadder and angrier when I knew that there was an Egyptian among the victims who were killed by crazy Cho.

“It turned out among the victims according to Virginia Tech. institute the Egyptian researcher Walid Mohamed Shabaan from Zagagzig in Delta , a doctoral student in civil engineering , he was working in the national center for Water researches and had a personal scholarship for PHD there since August 2006,” she notes.

However, Zeinobia is quick to criticise Western media for not shedding enough light on the Arab victim.

“There is no(t) much about him in the American media ,I don't know why they neglected him, I check the New York Times and I found nothing, in the American TV the same thing.

“Already I think his story is tragic even more tragic than many of the victims because this young man finished his study ,took his degree and was supposed to leave and return back home to Egypt on that day of the massacre, he should have returned home by today.

“Instead he will return home dead,” she says.

Meanwhile Iraqi blogger Iraqi Konfused Kid, who is a university student in Jordan, provides links for the killer's two plays.

One of his readers notes:

Hey, I've been reading your blog for a while. Thanks for creating it.

With this post you created about the Virginia Gunman, I thought how it's interesting that you keep up with the events in America when many people here are relatively ignorant of the events in your country and elswhere in the world. It just struck me as wrong somehow. America has to become more connected with the world. It's our only chance.

“I’m sure everyone heard of the massacre of 32 people at Virginia Tech by one of the resident students, some guy called Cho Seung-Hui. Apparently, the guy did what he did cos he had no life!!! And he videotaped a suicide message which was aired on NBC news. One of the quotes he said was:

SO WHAT?!?! He was poor so that makes it ok to kill 32 people??!! And he wanted to show the world how disturbed he was?” he writes.