Shuvo Bangla Noboborsho (Happy Bengali New Year) to everyone. April 14th was the first day of the Bangla year 1414 also known as Pohela Baishakh. In Bangladesh, this day is a national holiday and in West Bengal it is a public holiday. Now Bangladeshi bloggers will take us through the history, culture and celebrations of this event. 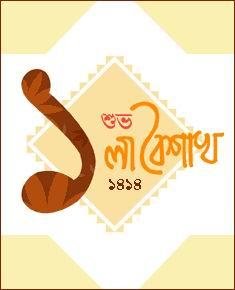 Some history [1] about “Pohela Baishakh” via The 3rd world view:

This marks the beginning of Baishakh, the first month of Bengali calendar. Celebrations of Pohela Baishakh started from King Akbar's reign (sixteenth century). The main event of the day was to open a halkhata or new book of accounts. This was wholly a financial affair. In villages, towns and cities, traders and businessmen closed their old account books and opened new ones.

The celebration of Pohela Baishakh by broad masses in the Bangladesh context may be dated from the observance of the day by “Chhayanat”, a cultural organization in 1965. In an attempt to suppress Bengali culture, the Pakistan Government had banned (Rabindranath) Tagore songs. Protesting this move, Chhayanat opened their Pohela Baishakh celebrations at Ramna Park with Tagore's song welcoming the month. The day continued to be celebrated in East Pakistan as a symbol of Bengali culture. 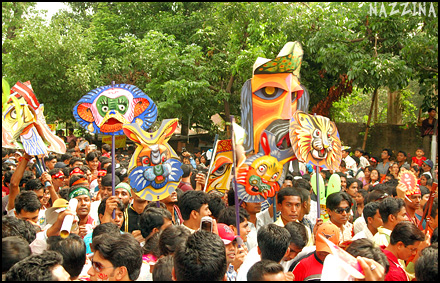 After the independence of Bangladesh this has grown to be a countrywide mass celebration. In the big metropolitans like Dhaka and Chittagong this day is marked by mass crowd flocking to hundreds of open air concerts and cultural programs, mask rallies etc. Close your eyes and try to see gives an account of his Pohela Baishakh experience [2] in the capital Dhaka:

I started walking towards the historic “Ramna Botomul”, center of all attraction and the value of the cultural program. The crowd was so thick all around that it was not easy even to walk. The whole area became a sea of people. There was no vehicle allowed within one kilometer of the “Ramna Botomul”.

But what drives all these people to go out and celebrate? Ulysses of Back to Bangladesh observes [3]: 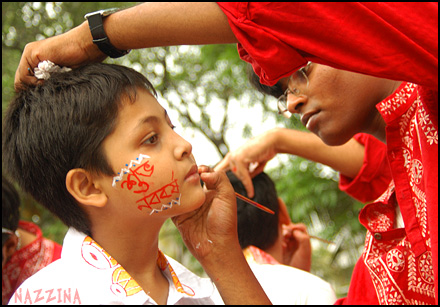 (This is) the only holiday which is pure fun. No historical or religious connotations. Just enjoy the day. So people were out for fun. Kids getting faces painted, playing with balloons and balls. Women wearing white and red saris. Friends walking hand in hand. Mothers, fathers, children – some grandparents.

People enjoyed traditional culinary delicacies ‘Panta, Ilish, Shutki and Pitha’ at home and in the streets. Ershad also has some reflections of the new year [5] in Dhaka city. 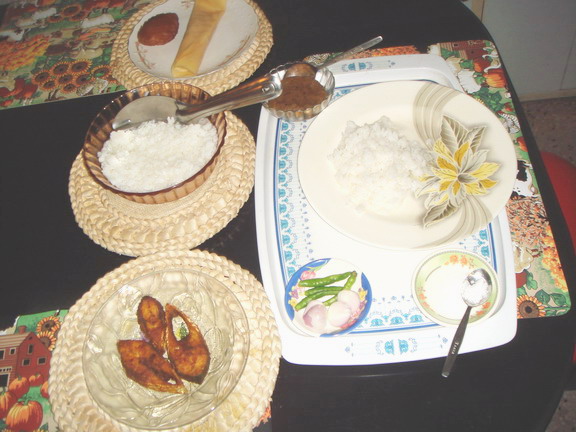 It's one of those days when you can cook khichuri and wait for the rain and the storm because we Bengalis love having khichuri when it rains or when the thunder is tearing the dark sky in a million pieces with it's thunderous sound!

Shadakalo remembers [7] the innocent lives lost in an terrorist attack at Ramna during the pohela boishakh celebrations 6 years ago.

The fundamentalist islamic terrorists thought attacking one of the cultural celebrations of life and renewal would serve their purpose, and for a while, protected by their friends and masters in the government, it worked. But its a new government and a new will to fight this evil, and we are glad to hear that the case is being resurrected.

Time and again the religious fundamentalists and political oppressors have feared the free spirit of the masses and the people power. They always try to instill fear inside people by their terrorist activities and restrictions everywhere. But people always rebel against such intimidation by showing their support in masses. And Pohela Baishakh is one such occassion to just do that.