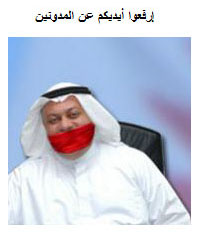 This is Mahmood Al Yousif, the God Father of Bahraini bloggers, who is being sued by a Bahraini Minister for comments he published online. [1]

Mediations between the two parties failed [2], and the case is now being heard by the Higher Criminal Court tomorrow.

Even the meek Bahraini Journalists Association is backing [3] Al Yousif, and has called for society to rally for his case.

The association issued the following statement:

Bahraini Journalists Association invites all journalists in Bahrain to amass in solidarity with the Bahraini blogger Mahmood Al-Yousif at the High Criminal Court on Tuesday April 17, 2007 due to the case brought against him by the Minister of Municipalities Mansour bin Rajab.
This calls all the journalists to be present at the courtroom and declare their solidarity with Al-Yousif on this issue of freedom of opinion and expression in Bahrain. The BJA condemns the insistence of the minister in pursuing a lawsuit against Al-Yousif, especially as Al-Yousif’s criticism of the minister in his Internet published article was criticism of the minister’s capacity as public official rather than personal. The BJA also calls on civic institutions political and social to show their solidarity by attending at the trial and release supportive statements of Al-Yousif.

Al Yousif, who enjoys huge popularity in Bahrain and beyond, made this announcement [4] on his blog today:

We’re all gathering tomorrow morning at the Court building at 9:30. Cases are looked at starting at 10:00am.
It’s a freedom of expression case, any way you look at it. Please show your opposition to attempts to stifle this freedom by being there.

He also shares with us his thoughts on the trial [5], which he emphasises is a case against freedom of expression.

What I want to emphasize, if I may, this is not really a case against Mahmood Al-Yousif as much as it is a case against the tenets of the freedom of expression.
We, the people, should not be cowed into a status of never questioning or criticising a government official no matter how high that position is. They have to realise themselves, or be made to realise that the positions they occupy being called “civil servants” is no accident of nomenclature, but fact.
Unfortunately, both the Penal Code and the Press & Publications Law specifically not only discourages this civic responsibility of criticism, but glaringly criminalise it!

Al Yousif remains adamant that he committed no crime in criticising the official.

No, this is not a case against Mahmood Al-Yousif and never was. What I have written is rather mild when you consider it. This is a case purposefully levied to silence criticism.
Today it is me. Tomorrow it is everyone who dares to even glance “wrongly” at a public official, even if that official happens to be a janitor.

لا أشك بأن الهدف الأول والأخير للمحاكمة هو رسالة تخويفية للمدونين وللتخفيف من انطلاقتهم نحو رصد كل التقصير وتسجيل كل المخالفات التي تجرى.
قضية محمود ليس قضيته وحده وليست قضية المدونين البحرينين بل هي قضية كل المدونين العرب ، كل من حمل على عاتقه هم قلمه وسعى لكتابة الحقيقة ونشر المعلومة الصحيحة ووقف بكل جراءة ليقول الحق أمام كل ظالم ومستبد ومتجاوز ومقصر .
لنقف جميعنا مع كل مدون حر
ولنقل لا لقمع المدوني
There is no doubt that the first and final aim of this trial is to send threats to all bloggers to stop registering all the shortcomings and offences taking place around them. Mahmood's case isn't his alone. It is also not a case of Bahraini bloggers. It is the case of all Arab bloggers and all those who have taken it upon their shoulders to expose the truth and publish what really is taking place in a courageous manner and tell the truth in the face of injustice and those who trespass on the law and don't live up to their obligations. Let us all stand with every free blogger and say no to the repression of bloggers.

From Dubai, in the neighbouring United Arab Emirates, Secret Dubai also rallies support [7] for the blogger as well as for more freedom of expression in the region.

“Bahraini journalists plan to gather at Bahrain's High Criminal Court on Tuesday 17th April to protest the libel case brought against Mahmood Al-Yousif by government minister Mansour bin Rajab. Mahmood criticised bin Rajab and his department's response to heavy December rains that caused flooding. The minister claims his “feelings are hurt”.
This is a stark reminder that the privileges of freedom of speech that many of us enjoy back home in the West are not available in this region. In properly democratic systems of government, criticism of the government and government figures is expected and necessary for the democratic process. According to the UAE Publications Law, such criticism is illegal. In Bahrain, and in the wider Gulf, one can face heavy fines and lengthy jail sentences,” he writes.