A wide range of topics up for discussion in the South Asian blogosphere. The possible chaos of adopting Daylight Saving Time, Bangladesh's answer to 007, a car rally to improve people to people contact, on caste, religion and ritual and much more.

Bangladesh:
Sada Kalo endorses the Government plan to introduce “daylight saving time” scheme to manage power crisis but is apprehensive about the inevitable chaos that will follow in the country. Ahemede Hussain of Black and Gray interviews Kaiser Haq, the notable English language poet of Bangladesh. Masud Rana or agent MR-9 has been the Bangladesh's answer to James Bond 007 for the last forty years. Mahmud portrays the thriller series written by Qazi Anwar Husain and published by his Sheba Prokashoni.

Bhutan:
Ugyen wirtes about the recent 3rd leg of the SAARC car rally which went through Thimphu, the Capital City of Bhutan. One of the objectives of this rally was to enhance people-to-people contact within the South Asian region. Bhutan Film Blog posts an YouTube version of the award winning Bhutanese documentary “Price of Knowledge”. 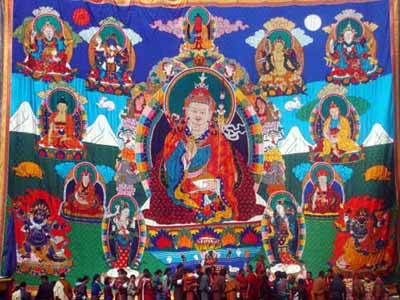 Ugeent of Kuzu Bhutan Weblog describes the Tshechu ritual. It is normally performed during the tenth day of the Bhutanese calendar. Before the sunrise of the last day of Tshechu the great Thongdrol, an intricately embroidered silk scroll is displayed (photo courtesy Kuzu Bhutan Weblog).

India:
Dina Mehta asserts that now internet is a way of life for youth. Rama of Cuckoo's Call reviews “India untouched”, a film on the tradition of 4000 years old religious system of caste practices and untouchables in India. Debashish interviews the Greatbong, winner of two categories in the Indibloggies 2006 including Indian blog of the year.

Nepal:
Dinesh Wagle writes in United We Blog that the Nepal Telecom, the government entity fails to tap on the mobile phone craze in Nepal providing contemporary mobile technology and access to Phones. Bhupall of Nonviolence for Peace and Democracy criticizes the Nepalese leaders’ habit of self praise. AtoZ-Nepal lists the ethnic communities of Nepal.

Shirazi at Chowrangi critiques the driving manners in Lahore. Adil Nizam of All Things Pakistan is taking a different look at the EU ban on fish from Pakistan and comments that it is an opportunity to re-examine the fisheries and seafood export policies and slow down the industry – thus allowing the local marine wildlife to flourish. Jahane Rumi travels to Dhaka and finds that Pakistanis are not unwelcome in Bangladesh (formerly a part of Pakistan) although they had a bitter past and experienced a bloody seclusion.

ÃYUBÕWAN lists ten best places to visit in Sri Lanka. Niro of A week in Sri Lanka dicusses the rampant Audio & Video Piracy in Sri Lanka. Mixing sports with politics: Lanka Pages denounces the attempt by Amnesty International to bring down the morale of the Sri Lankan Cricket Team.