Capitalism is now officially approved at the Party level, but with otherwise law-abiding small-scale sidewalk sellers nation-wide operating in constant fear and in conflict with (photos) the chengguan (more photos), the urban management forces found in every city, has this ideological thaw trickled down to the streets? Not yet, says 50mm photoblogger Bai Xiaoci in his post this past week, Barbecue Stall. 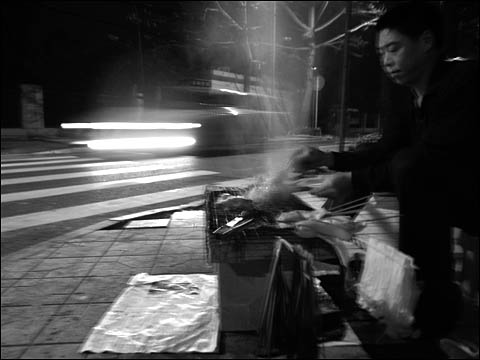 Down on the southern part of Jingtian road in Shenzhen‘s Futian district, all the conveniences of life can be found; gathered near Xiangmei Market are many hawkers who come and go, every morning there's a temporary vegetable market. There was a time when they were nowhere to be seen, chased away by the urban management, but now they've made a bit of a comeback. At night, the barbecue stalls come on stage. Some of them are more permanent, like the one in the garden behind the tow truck lot, and another across from the west corner of Xiangmisan Village.

The barbecue stalls appear on the streets at midnight, after the garbage trucks have all driven off. Adding the fragrant scent of sizzling mutton into the salty air, these barbecue stalls can be found all over Shenzhen at night. They've become the main category of cheap night snacks in Shenzhen. Most diners know that the barbecue stalls, though they may appear so, aren't chain operations. Whether it's the choice of location, the business logo, the kinds of people employed or the kinds of foods supplied, they're all pretty much the same. Most barbecue stalls are run by a husband-wife team, with the man tending the grill and the woman in charge of taking care of diners. If they can feed ten people, with an average expenditure of fifteen yuan each, working five hours each day, their ideal income for each day would be about 750 RMB. They differ from Xinjiang barbecue stands in that they offer both meat and vegetable skewers. For meat they have mutton, oxen, chicken gristle, chicken wings, frog, goat knuckles, and some stands even offer oysters. For vegetables they have eggplant, string beans, leeks, enoki mushrooms, dried tofu and potatoes. Get a long, upright metal box for charcoal, put a sheet of wire netting on top for a grill, get a few stools, light the fire and you're open for business.

But honestly, talk of hygiene conditions aside, this barbecue is really tasty. I have one colleague who often goes down to one barbecue stall on the corner near Great Wall Towers. For a long time already, it's had a set crowd of regulars, mostly kids who stay up all night, workers on the night shift. At midnight, when most shops have closed up for the night, these cheap and good barbecue stalls are their second choice. The barbecue business is booming, has even become an established industry chain, and has even given birth to a new profession. They say that inside inner-city villages, many people make a living by peeling bamboo and selling it in batches to the barbecue stall owners. The many people coming for barbecue has had a positive influence on the little shops in the area. One newspaper kiosk nearby used to close at eight at night, but now with the barbecue stands, it's extended its operating hours, because the BBQers always drink beer and herbal tea and other such drinks which are inconvenient for the barbecue stall owners to carry around, allowing the newspaper kiosk a share of the consumer profits. Their economic relationship is just like that of the beekeeper and the apple farmer in Steven N.S. Cheung‘s ‘The Fable of the Bees‘.

The natural enemies of the barbecue trade are the personnel of the urban management enforcement squad, whose enforcement strength is directly related to the continued existence of the barbecue stands, and also affects the quality level of barbecue in the area, for whom the consequence of enforcement is the loss of means of livelihood. This is why barbecue vendors are so very particular in choosing locations. A good choice of location will, when urban management come by, effectively reduce losses, so they usually choose the green areas near main roads, which 1) guarantee people flow; 2) have a good line of view; 3) allow them to hide their barbecue cookware and ingredients in the bushes. In addition, the strength and frequency of enforcement differs between urban management squads in each area. Some areas only work in the daytime, others remain on patrol until midnight, some are only seen every few days and others only a few times each month. In areas where urban management patrol frequently, it's often hard to find high-quality barbecue. According to night owls, the best tasting barbecues are usually found in the inner-city villages and such rough places which are paid little attention, and quality levels rise rapidly. In Baishizhou and such places, some roadside barbecues have already grown for a few years to the point of having become brand names. After having accumulated enough capital, they rent proper spaces, hire wait staff and become legitimate food and beverage enteprises. Some even end up franchises.

“Bandits!”, “evil!”, “dogs”, “trash!”, “they've no place in a democratic country!” write many Chinese netizens of chengguans in response to a March 31 repost on the widely-read Tianya forumof the netbuzzing story of Beijing peddler Cui Yingjie who, last August, finding himself surrounded by ten chengguans, ended up killing one in the scuffle, then being sentenced to death, later being cast online as a martyr. Among the many responses to the post were this series of photos of a chengguan attack in process in what appears to be the southern Chinese city of Guangzhou: 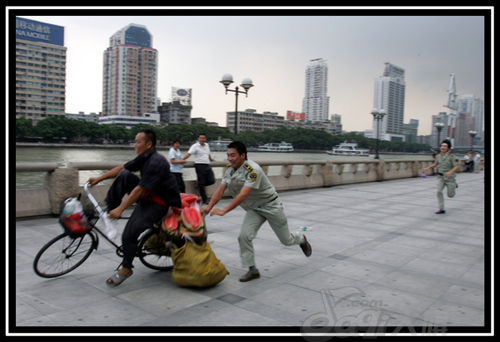 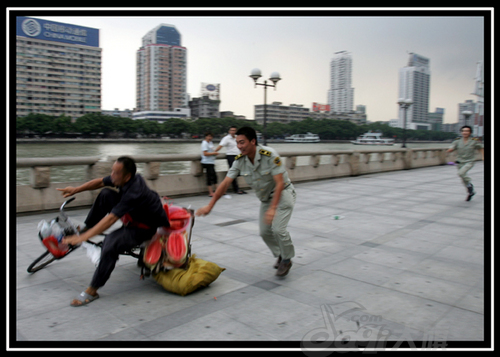 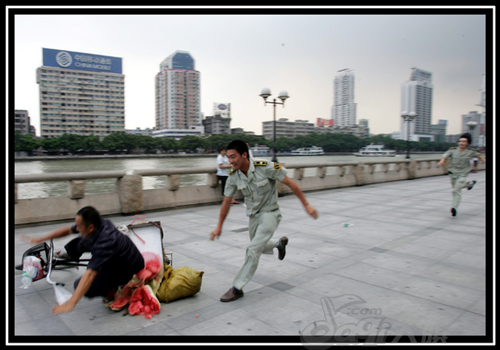 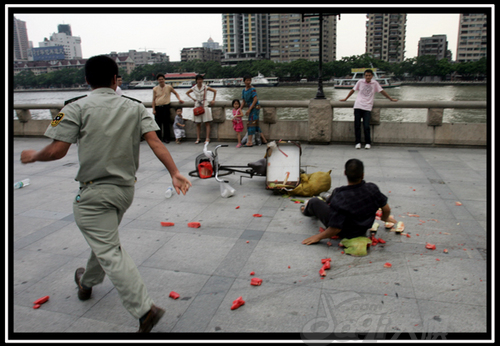