Americans in Moldova; Moldovans in Italy…

Alexandru Culiuc's weblog is one of the best in the Moldovan blogosphere – probably the one I enjoy reading the most, and happily it has an owner and readership that don't seem to mind my mostly English-language comments. Last year, Alex had an interesting post about foreigners’ impressions of Moldova (titled “Moldova as seen by comedians and volunteers”), in which he discussed and linked to a few of the blogs written by Peace Corps volunteers (PCVs) – Americans – in Moldova.

For whatever reason, the discussion in the comment section of that post was re-started about a week ago, and I posted a couple of comments there, mainly 1) trying to stick up for an outstanding PCV blogger named Peter Myers – not that he needs me to stick up for him – who some of the Moldovans felt was being too critical of the rural school he teaches in, and 2) disagreeing with the broader notion that all PCVs are “losers” or people who haven't found themselves in American life.

My comments there are not that interesting, frankly, because they go down a well-trodden path about how criticism can be a good thing if it's constructive and digress into discussions of the American educational system and other less-than-relevant topics (though the discussion was refreshingly friendly compared to others I've been involved in recently). They are not, for example, as interesting as one of Peter's recent posts:

After class today, I noticed nearly a dozen men, of whom I know several and who are major figures in the village, standing around on the first floor of the school. I said hello and then continued upstairs. On the way to the computer lab, I saw Raisa, one of the cleaning ladies. I struck up a conversation:

“Why are practically all the men in Mereseni at the school right now?” I said, exaggerating.

“It's a Communist party meeting,” Raisa said. “They want the Communists in power.”

This was the first time I had heard of a local Communist party in the village, but it didn't surprise me. Before I could respond, Raisa summed up the political thinking of many Moldovan villagers, rooted in nostalgia for the times when food was cheap salaries came on time:

“I would be in favor of the Communists,” she said, “if I thought that they could make things the way they were back then.”

But I've already digressed from my intended point, which was to translate one of the more recent comments to the post mentioned above on Culiuc.com, written by a Moldovan living in Italy [I've translated it from Romanian, and I hope anyone who can will correct any mistakes – although I don't think there are any serious ones, my Romanian is not as good as my Russian]:

Hello to everyone from Moldova, I'm in Verona, Italy now, it's a beautiful and rich country, but you just can't imagine how much you miss those green pastures of home. Here as everyone knows there are lots of foreigners who work at very difficult jobs, there are lots of Albanians, Moroccans, Blacks, and of course Moldovans, Ukrainians and Russians.

When I get on a bus or go into a supermarket, I feel at home because if you want you can ask something in your own language. Ours is a small country and I don't understand who has stayed home if there are so many of us here. I hear a lot of compliments from the Italians about us: we learn foreign languages very easily compared to them, we are good-looking, clever, and very emotionally strong. When they have a little problem, they have to go to a psychologist, since they are very melancholic and, as they say, “Non voglio fare niente” – man, what about all the problems we have, I guess we should just die, but no, we struggle and get through it all.

My friends ask me what Moldova is like, and I don't know what to say, it's a lovely country but of course there's nothing to see there, because it's nothing compared to other places, so I tell them that all you see there is bars, good times, and drinking.

Everyone who's here wants to go home but then they come back and say that it's even worse, they shouldn't have gone because it was just a waste of money and it's sad there, but I still hope that someday we too will speak with pride about our country and lots of foreigners will come so we can show them how brave [bravii] we are.

Now I ask myself, what am I doing in a strange land with a strange language, living in a strange house, if I have a big house and an apartment at home, and all my folks are there? I don't have an answer, for some reason my plans seem to keep me here, but Moldova is still in my heart always.

Maybe it was the style of the original – stream-of-consciousness, with minimal punctuation and capitalization; I've added paragraph breaks and more sentence breaks in translating it – or me being too sentimental in the spring air, or who knows what else, but I found this to be one of the most moving things I have read in I don't know how long. 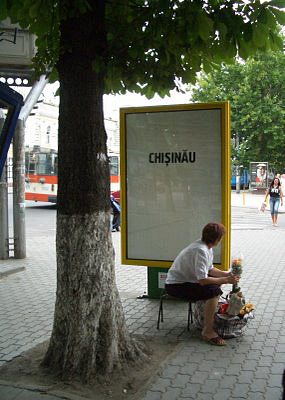