On March 21, Moscow hosted its First International Conference on Blogs, Media and Citizen Journalism. I was happy to represent both Global Voices and neweurasia at the meeting. The conference was organized by the Centre for Internet Policy of Moscow State University for International Relations (MGIMO), Realno.info, a web site that was created in the summer of 2006 to bring together regional journalists, and a Club for Regional Journalists “Iz Pervyh Ust” (“First-Hand Reporting”). The idea for the conference came up when Rostislav Vylegzhagin, one of the organizers and editor for Realno.info, was writing his dissertation on new media, only to discover that there are no Russian-language sources on new media, despite much interest in it. 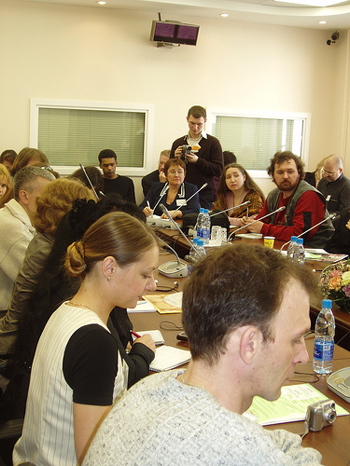 Session on freedom of speech

Russia has a vibrant community of bloggers on Livejournal platform. Recently, a group of volunteers started publishing the offline journal “Live Journal“, realising that the conversations online are too important to be ignored. “LiveJournal”, which republishes posts from LiveJournal bloggers, is distributed free of charge in Moscow cafés, and is soon to reach the regions.

Blogs help shed light to events not covered in official media and challenge perceptions about Russia built by the mainstream media. But there is also a lack of information within the country itself, compounded by differences in Internet penetration and uneven coverage of events. As one of the organizers of the conference, Irina Yasina, of the Club of Regional Journalists “Iz Pervyh Ust”, put it, “Information in Russia is only available to those who are not lazy to look for it. The majority are in a deep sleep, which is strengthened by Russian television, a picture reminiscent of Brezhnev’s times”.

Continuing her speech on whether Russia needs citizen journalism, Irina said that, for her, the blogosphere is a reflection of citizen participation. If people write blogs, they are concerned with what is going on around them. Russian civil society is scared to go and protest on the streets, and thinks it is dangerous to deal with people in uniform. It is not possible for them to remain quiet, though – thus, the protest is going on in blogs and civic media.

Dmitry Peskov, Director of the Center for Internet Policy, delivered his welcome speech, noting that the University of International Relations decided to convene this conference as blogs can already be considered part of international relations. Four or five years ago, when the first bloggers appeared in Russia, the IT administrators at the universities used to block access to Livejournal. Now, however, there is a need to explain the positive side of the blogosphere. The Centre for Internet Policy deals with practical policy issues, research on the Internet for private and state companies, and teaching. Last year, MGIMO took part in a competition for innovations in universities, and won 990 million rubles for their project, participative University 2.0.

Peskov said something that I has also come there to say – that there is a market for bloggers writing in English from Russia: “You should not just copy the existing schemes but look for new things, to experiment and build from the future, not giving way to old habits.” Some people in the audience were not so optimistic when referring to digital divide between major Russian cities and the regions. Peskov believed, however, in the state's plans to realize its plan to providing Internet access in schools, and connect each village within 5 years. MGIMO has a lead in web innovations: it is, for example, using Creative Commons licensing, which was translated to Russian, but does not yet have legal force in Russia. 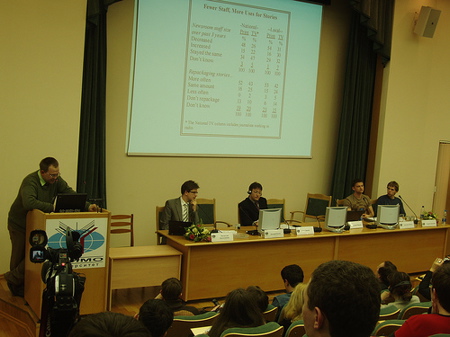 Evgeny Morozov, TOL, speaking at the last session on the future of new media

A session on Freedom of Speech in the Russian Segment of Internet was organized for regional journalists, who shared their experience with the government's limits on online activities in order to better respond to such problems. Mikhail Afanasiev, editor of the web site “Novy Fokus” (“New Focus”), Boris Surganov (Zyryane.ru), Dmitri Kolbasin, and Irina Khrunova, a lawyer from the human rights organisation “Agora”, spoke at the session. There is not much regulation on Internet media, thus the authorities are not consistent with their restriction measures, and when online journalists get sued, most often it is for insulting the honor and dignity of officials (Criminal Code).

Mikhail Afanasev mentioned one case where one web site was “confiscated” by the state as a “tool for committing crime”. (It is still being published, with just one letter changed in its name). Some sites are punished for failing to register as mass media, others for doing just that. Citizen media sites, in particular, new but rapidly developing in Russia, are currently in a legal limbo: there is a need for a legal document that would regulate citizen media. The lawyer said that it is up to journalists to take the initiative, to urge the government to draft regulations before the state drafts them without consulting them.

My Global Voices presentation, with slides on new media kindly provided by Rebecca and Ethan, was part of the afternoon session. It was one of the three sessions: the others were on Realno.ingo, and on media and blogs by neweurasia’s Peter Leonard (now working in The Moscow Times). About 30 people attended Global Voices/neweurasia presentation, where I spoke about the development of citizen media in the West, the creation (Ethan's media attention map!) and structure of GV, examples of voices we are covering (e.g. Salam Pax and Mahmood Den) and project Lingua in Russian.

Among the questions the audience asked about GV were ones about the organizational structure and financing of the site, the attribution policy and the range of topics we cover. The day ended with a discussion about the future of citizen media, where an attempt was made to address questions such as “Is it okay to earn money by blogging?” and “Will there be any newspapers left in several years from now?” The final conclusion was that both media and blogs win from cooperating with each other. The cycle from blogs to media and back to discussion in blogs improves reporting: professional journalism will not become redundant, whereas blogging will become more professional.