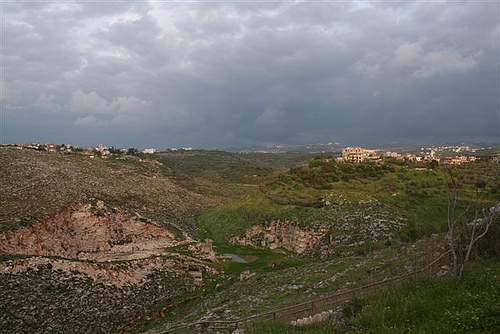 In Lebanon spring officially begins on March 21. This is why March 21st is celebrated as Mother’s Day here. Bloggers tend to post more about love, nature and sunshine, reflecting the general upbeat mood. Even the political post tend to be plans, strategies or analysis about how to make things better. I have collected a sample of both in this round up and as usual, this is just a sample. There is a lot more out there, but space and time do not permit to list them all.

Let’s begin with bloggers who posted photos of their trips to South Lebanon:
McDara posts this photo article [1] about his visit to South Lebanon. One of his photographs is seen above. Adiamondinsunlight also took a trip to the South and came back with some photos [2] which she posted on her blog.

Reflecting the general mood of spring and its effect, Adiamondinsunlight brings up the topic of skirts when she states [3]:

Spring is in the air in Lebanon, and my heart is filled with anticipation at the sartorial joys of the season. During the warm weather months, I dress almost exclusively in skirts. I love their clean lines and the way they hang – and, of course, the way they swish-swish-swish when I walk.
Here, I also love wearing skirts because they remind of yet another treasured date conversation.

And so did Mirvat in this post [4] when she links spring and love:

As the golden rays tenderly reinvade our days. As the shy Spring springs the first promise of summer and heat and fun, everyone around me seems to be falling in love. I am falling in love too.

Enough with the spring love already. Let's move on to art. Here Ibn Bint Jbeil takes us, in one post, through a step-by-step guide [5] on how to reach the design below of which he says:

Arabic Design is about harmony, unity, perpetuity. It is, as my late professor Dr. Gordon Bugbee would say, “A Unity that is Subdivided.” Yet it is also about a certain innate, naturalist beauty that is ironically communicated through a delicate, measured geometric aesthetic. If you are into some lengthy articles about some serious stuff then you may visit Marxist From Lebanon who is investigating the Lebanese ethnic dilemma [6].

What is the relationship between Asterix, the Lebanese and their politicians [8]? Abu Ali has an answer:

The Asterix analogy persists to this day in the minds of many Lebanese. But they don’t see Lebanon as the village holding out against the Arabs anymore (many never did anyway), it is their sects that are besieged and holding out against …the other sects. Each sect has its own sets of heroes: for many Maronites, Samir Geagea is the reincarnation of Asterix the honorable freedom fighter, and Patriarch Sfeir is definitely the wise druid Getafix. For many Shi’a, both Asterix and Obelix fused into the persona of Hasan Nasrallah during the July 2006 war (that’s why he wears large flowing black robes), although after his press conference of March 20, Nabih Berri may soon be making claims to the title of the Shi’a Asterix.

This is all this week. See you next week and happy spring.