Egypt: Arrested Activists and Bloggers Released in the Desert 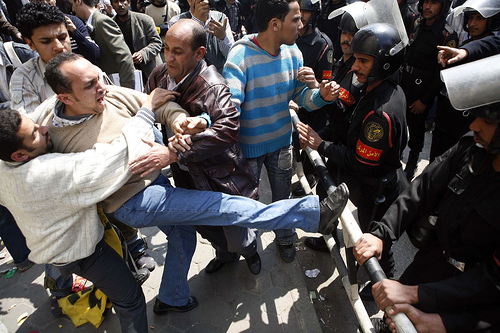 Egypt today released bloggers and other activists arrested in an anti-Mubarak rally in Cairo held the previous day in the desert, according to bloggers.

Blogger and journalist Hossam El Hamalawy, who has been closely following the developments, writes:

Police released the remaining Kefaya activists in custody today in the afternoon, after they spent their night in the Qattamiya desert, locked up in two prison trucks.
There were two prison trucks; one containing eight detainees: Ahmad Droubi, Adham el-Safti, Omar Mustafa, Ahmad Samir, Khaled Mustafa, Sherif Ragab, Mohamed Abdel Qader, Kareem el-Sha’er.
The other car, it turned out, had two activists only: Mohamed Gamal and Omar el-Hadi.
The detainees, according to a phone interview with Droubi, were not allowed to leave the car, and were given food only once at 4am. They even had to urinate inside the prison truck in empty Koshari boxes and bottles, courtsey of Mubarak’s police.
The prison trucks started cruising in the afternoon again, and dropped each detainee off in a different location out in the desert, starting from 2:40pm, according to lawyer Rajia Omran.

The arrests were made during demonstrations called for by the opposition, including the Muslim Brotherhood and Kefaya, against proposed amendments to the constitution. A referendum on the changes which would help the ruling National Democratic Party (NDP) exclude opposition Islamists from the political system was also held today. The referendum, which was marred by civil unrest and clashes with the police as seen in the photograph above, saw a low turn out because of calls by the opposition for people to boycott it.

According to blogger Alaa Abdelfattah, the changes (Arabic) – “ensure the continuation of the dictatorial rule over the country, the inheritance of succession and the abolishment of judiciary monitoring of the elections.”

But what happens to activists who end up in prison in Egypt?

The following link gives us a chilling insight to life behind bars in a detention centre. There are also photographs and a video link showing the atrocious conditions detainees are subjected to when rounded up at protests.

I have noticed the following in the prison cells and the treatment with detainees:
First: The prison cells were so narrow; one of the detention cells was 3 * 4 metres and it contained 11 detainees; the other was 6 * 3 metres and it contained about 14 detainees; Ikhwanweb correspondent managed to take photos of them through his camera phone which he hid in his clothes after the security forces have arrested him.
Second: The toilets are not suitable for human use.
Third: The detainees received tough treatment from the state security: visits were banned, their lawyers were not allowed to visit them throughout the period of detention except when the detainees declared their hunger strike, the police officers allowed lawyers in cells to attempt to make them stop the hunger strike.
Fourth: Conflicting orders from State Security Police officers.
Fifth: There was no difference between Muslim Brotherhood detainees and Kifaya detainees; the regime gives of them the same maltreatment, repression and persecution, the same policy it will use towards any one opposition to the constitutional amendments.
Sixth: MB, Kifaya members were detained in this crackdown; the system did not differentiate between them.

Is Censorship the Solution?

In Egypt, many activists double as bloggers, in a bid to air their grievances about the authorities and the system. To reign in increasing dissent, Judge Abdel Fattah Mourad is hoping to block 21 blogs and websites which are deemed as harming Egypt’s national security, defaming Egypt’s image abroad, and insulting President Hosni Mubarak.

“The Administrative Court will look into the lawsuit filed by Judge Abdel Fattah Mourad to block 21 blogs and websites, on Tuesday, 9am…PLEASE SHOW UP! THE EGYPTIAN BLOGOSPHERE NEEDS YOUR SOLIDARITY AND SUPPORT,” pleads El Hamalawy.