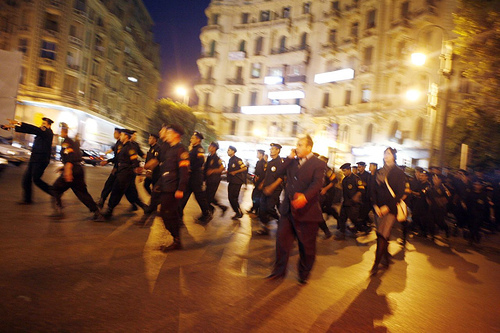 It is happening all over again..and may recur in a bigger way tomorrow (Monday March 26) as more Egyptians are threatening to take to the streets in protest against proposed amendments to the Constitution.

Incidentally, a referendum on the amendments , which aim to – in the words of blogger Ala'a Abdelfattah (Arabic) – “ensure the continuation of the dictatorial rule over the country, the inheritance of succession and the abolishment of judiciary monitoring of the elections” – will be held tomorrow.

“Police cracked down today on Kefaya’s demo against Mubarak’s, arresting more than 20 demonstrators. Downtown once again (and again and again) has come under occupation since the morning by Mubarak’s Central Security Forces troops, plainclothes State Security agents, and battalions of plainclothes thugs which the interior ministry uses to ‘keep law and order’,” writes blogger and journalist Hossam El Hamalawy on his personal blog here.

Among the detainees are naturally several bloggers, who in Egypt and around many of the third world countries are both online writers, protest leaders and political activists in one. Hamalawy , who was briefly detained, takes us with him on this protest, which has now become an all too common scene.

“As groups started to assemble in Tahrir, police agents moved immediately to encircle them, and pushing them away, trying to convince the protesters to go to the Press Syndicate.
“Some including myself, saw it was pointless to stay in Tahrir, with the overwhelming security presence, so we started moving in a group towards Talaat Harb Sq., where we heard security wasn’t as heavily present.
“We moved slowly in Talaat Harb Street, of course being pushed by security, and followed by a battalion of plainclothes thugs, and security agents.
“But then we stopped, as we received news that GemyHood and Asad were kidnapped by State Security in Tahrir Sq,” he explains.

“Few minutes later, we heard strong chants coming from behind, at the beginning of Talaat Harb St. “Down! Down with Hosni Mubarak!” The march went on for five minutes, before security stepped in and kidnapped Malek Mustafa. CSF forces were mobilized also, and we found ourselves encircled by both the plainclothes thugs and the CSF soldiers. Among those encircled were local and foreign reporters. Security agents assaulted and confiscated the cameras of Tara Tadross of Reuters and Alexandra Sandels of the Daily Star Egypt. The latter’s camera was returned to her without the memory card that had the pix of the assaults.”

GemyHood's blog has a garbled sentence, probably hastily posted by a friend, which tells of his ordeal.

“Gemy was kidnapped at 6 pm on the Tahrir Square before the domonestration by punsh of thugs. then he was taken to the police car and we don’t know exactly where is him.”

Meanwhile, Abdelfattah, , has a post detailing the arrests and releases being made.

In an email to GV, journalist Alexandra Sandels, who was covering the protest, writes:

I saw several activists being assaulted and beaten. 20-year old
activist Salma Said was beaten and kicked in the stomach.
As the crowd moved up towards Talaat Harb from Tahrir, state security
and plainclothes surrounded a large group of us, including a bunch of
local and foreign journalists.
I myself got trapped in the craziness with people left and right of me
crying and panicking. I was trapped and tightly held down by security
and was denied exit along with other journos. Security confiscated
both my camera and that of Tara from Reuters. I got my camera back
later but the memory sticks with the shots from the protest are, of
course, missing.
After a while, security apparently decided to let foreigners out of
the encircled group. As we were walked to the side by plainclothes,
the remains of the crowd (i.e Egyptian activists and journos) were
being pushed away and assualted. I saw several young girls in the
crowd before I was taken out.
Many activists were then pushed into military buses and driven away
immediately. We still don't know where exactly they are.

Because it is difficult to keep track of how many Egyptian bloggers are being arrested and released for taking part in the protests, I guess we will have to wait until the action cools down in Cairo and the authorities make a final cut on whom they want to keep behind bars and whom they want to send home before a final head count.

This is not all. Stay tuned for more action tomorrow.