Kuwait: A Week Goes by

The Kuwaiti blogosphere has it all this week – from business developments to the opening of a new mall, the death of a bookshop and segregation at Kuwait University.

Q, back at Kuwaitism, talks about the shift of business power and how other businesses around the Gulf region are acting.

“Recently, there has been a new shift in business, from Qatar and Dubai INTO Kuwait. In the past two weeks or so, three major deals have happened to Kuwaiti companies that need to be looked at in that perspective,” he writes.

Speaking of business, a new mall opened in Kuwait and yo_ghurt takes us on a tour of the new The Avenues.

“Yes, Kuwait’s latest shopping mall, The Avenues is open today. A number, though not all, stores are open, as well as some cafes and restaurants – Starbucks (naturally) and Le Pain Quotidien,” explains the blogger. 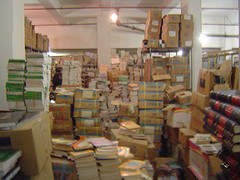 Sadly not all businesses are growing as Forzaq8 finds out when he goes to look for a dying book store.

“I was in Hawallay and I read the news of Alrubaya’an closing his bookstore and selling every book for 250 fils (around 1 dollar). So I went there, and after a while of driving around and asking I finally find the basement where the books are being sold.
I advice you all to go and try and give these books a new loving home,” he writes.

Meanwhile, The stallion takes us on a pictorial tour of the PAWS dog show.

“I attended the 2nd Annual P.A.W.S dog show that was held at the British Embassy and I had a blast! The event was done differently this time where there were actually tables set up and The Movenpick supplied food as well as Chef Ramzi and the home baked goods! There was about two times the amount of people and dogs this year than there was last year!” notes the blogger.

Amer over at hilaliya notices something strange with Kuwait's cinema.

While speaking about films, let me brief you about our own Kuwaiti film – When the people Spoke II. It is a documentry shot by Kuwaiti director Amer al Zuhair , who is going to show the first screening soon. He also put a map on his blog showing where the documentary will be screened.

“Finally the screening of ‘ When the People Spoke – part two’ will take place on Tuesday and Wednesday, March 27 and 28 at 8:00 pm. Hope to see you then,” he writes.

Another Kuwaiti blogger, MacaholiQ8 went to Wafra (an area at south of Kuwait, near the Saudi border with a lot of farms) and took his camera with him. This is what he got.

Triggered by an article in a newspaper, aggy talks about The Kuwait that was…

“I read this article in the local Al Qabas (Arabic) and was stunned by the very concept of a non-Kuwaiti verbally surprised with the Kuwaiti state of affairs in Kuwait University.
Everyone agrees that university life is merely a micro-social representation of actual social life. You have your usual round-the-mill moderates, the two extremes (left & right), the clueless, and the powerful Upper-class. They all send their kids to college who interact with other people during their studies, and become influenced by their ideals & morals & values…just like normal societies.
What's shocking is that gender segregation has become an accepted scene in KU!! This educational institution which, by it's very presence, be neutral to ANY affiliation of any kind, has succumbed to the demands of the weak-sighted religious parties and has segregated it's student body by gender. Now how is THAT useful??” writes the blogger.