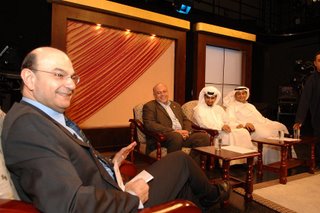 This was the question posed by a Kuwaiti blogger following the sudden axing of a popular television programme The Diwaniya, which was aired on government-run Kuwait Television Channel One (Arabic).

The Diwaniya literally translates to a room common in Kuwaiti homes, in which people gather to discuss their everyday lives, including social, economic and political matters.

The programme, hosted and directed by political analyst Dr Shafeeq Ghabra, is sociopolitical in nature and is aimed at opening up dialogue and bridging gaps between generations. Its weekly episodes openly debated the challenges facing the Middle East and also focused on the various issues affecting Kuwait today.

The programme was taken off air without prior warning after an episode featuring a group of Kuwaiti bloggers as well as Bahraini blogger Mahmood Al Yousif, was taped.

“The discussion was excellent, though probably too short of course to cover all the topics we wanted to cover; however, it is enough to entice the viewer to investigate blogging and maybe think of starting a blog themselves, which would be an excellent result of this program. Because of the topics discussed, I hope that the community too will be more aware of our activities and read our blogs to know us better and share in our passions and things that we choose to cover.
“The program is anticipated to be aired in April. I shall let you know the actual date when the schedule is actually confirmed,” he explains.

“The interview can be easily summed up as intro to Kuwait Blogging and the blogging scene in general. We were mostly asked one by one on blogging, how we started, what we wrote and then it dove more into the political/social aspect of it in Kuwait and the world….So what to expect from this? Well nothing much really in terms of a huge jump or rise in the blogging scene in the short term. It will be a great catalyst for long term things in the future. Just like any blog’s first post. It usually is never read and missed, but the later ones are read by more and more people,” he wrote.

But this is not to be!

Kuwaiti blogger Zaydoun, who was featured on the blogger's episode, tells us why.

“Here I was ready to celebrate my blog's 4th birthday today with a possible recap of our appearance on an episode about blogs on the weekly show “Diwaniat Al-Osbou3″, hosted by Dr. Shafiq Al-Ghabra, that was scheduled on KTV last night, but alas… it was not meant to be. Instead KTV pulled the plug (geddit?) because apparently the topic was too hot for their liking. I felt like the Ministry of Information had cancelled my party at the last minute, like they do on with musical concerts on a regular basis under whatever bogus religious pretence.

“Upon chatting with my colleagues who appeared on the show, we tried to recall if we had possibly said anything controversial that may have provoked this cancellation. None of us felt that we said much, but then I pointed out that our standards and definitions of “freedom of speech” are very different from the government's and while we may say what we want on our blogs without fear of recrimination (the worst that could happen – so far – is that some over-zealous ISP could block your blog), when it comes to the government's own media a big fat line is drawn, never to be crossed. Basically, the government feels “this is our TV station and we'll tell you what you can or can't say!” he writes.

Kilama6goog, who was also on the show, wonders whether the show was cancelled because of the threat bloggers posed on society.

“A short while ago we were greeted with good signs of change in the mentality of Kuwait TV. A few good programmes started to appear, which were successful in attracting a significant amount of viewers because of their bold themes, which were of concern to the Arab viewer in general and Kuwaitis, in particular,” he notes.

“But then we are surprised that Acting Minister Al-Humaimidi issued a suspension of the programme and stopped the airing of tonight's episode (the one where we were scheduled to appear) and ordered the reminder of the show to be shelved. I believe there are at least four episodes which have already been filmed. The question is: Was the show suspended because of the episode on bloggers?

The Kuwaiti Information Ministry later stated that the programme was withdrawn as part of a plan to revamp shows on offer on Kuwait Television.