[Editors Note: The following post originally appeared on the weblog of Creative Commons Peru and was translated into english by Juliana Rincón Parra. We've already seen a rural Ecuadorean “techno-folklorist” become an international celebrity by using YouTube and a weblog. Now a small German band is reaching out to bloggers around the world in their efforts to gain fame and make friends.]

Röntgenschall is on a virtual tour in Lima, Perú. With it´s motto, “your blog is my stage”, this small band from a small German city seeks to accomplish their great dream: Play gigs throughout the world. With this in mind and defying the paradigm that some people have that – the internet and the online diffusion of music goes against their interests – they designed a system that ranked their fans. The five blogs with most votes would host a virtual concert especially dedicated and edited for them, their country, and community of users. So that´s how the peruvian blog Txitua.org was chosen as their next “concert stop.”

This band has used different social networking mechanisms to spread their music: Del.icio.us, biTTorrent, Jamendo, Myspace, Youtube, Hi5. They have even freed up their music under a Creative Commons atribution, noncommercial, share-alike license. These are Web 2.0 tools every Peruvian artist should know.

I like Röntgenschall, what can I do to help them?

- Download, copy, spread and remix their music.
– Blog, make a Podcast or VideoCast
– Join their fan club, maybe your blog will be their next stop
– Visit Jamendo, write, rank it, make it your favorite
– Add them to your MySpace
– Add them to your hi5

- Press release in English
– The band's blog
– Concert at Txitua.org 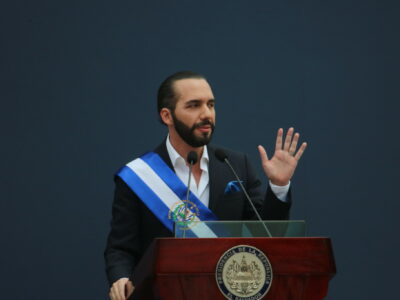 Why most Salvadorans want Bukele's re-election despite his growing authoritarianism