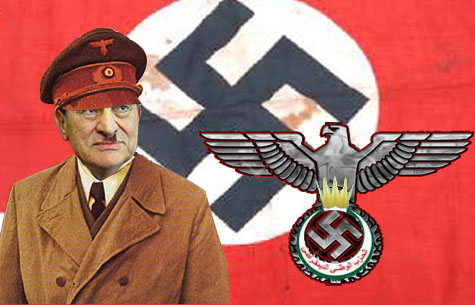 Three Egyptian bloggers arrested [1] for taking part in a rally to protest constitutional amendments in Cairo have been released [2], along with other protesters who have been detained for their involvement in the gathering.

“The 21 Kefaya detainees were finally released around 6:30pm today, after police agents at El-Dhaher Station stalled the process,” writes Egyptian blogger and journalist Hossam El Hamalawy.
“The detainees should have been released in the early morning, but the station’s agents kept delaying, saying they were “waiting for orders from State Security,” according to rights lawyers who were trying to process the activists’ release. At some point, the police wanted to delay the release by deciding to transfer two Upper Egyptian detainees back to their hometowns’ police stations. To our good fortunes, that did not happen, thanks to the lobbying of the present lawyers. A number of activists also assembled in front of the station, staging a sit-in to add to the pressure.
“The detainees on their part went on a hunger strike protesting their continued imprisonment, and only ended it with their release.
“I spoke with socialist activist and friend Khaled Abdel Hamid around 6:50pm. He was very cheerful, and said the police did not dare messing with them in custody because of the outside attention the rights activists, bloggers and the media were giving to them.”

The three bloggers are: Mohammed Adel [3], who gives us a minute-by-minute account of his ordeal – along with photographs – here [4], Mohammed Taher [5] and Mustafa Sayed Ismail [6].

According to El Hamalawy, another protest [7]is being planned for tomorrow.

“The National Forces are calling on all activists to join the opposition MPs in their sit-in in front of the Parliament, this Tuesday 3pm, to protest (Hosni) Mubarak’s authoritarian constitutional amendments,” he writes.

“Already today, opposition MPs in Egypt have walked out of parliament in protest over constitutional amendments proposed by Hosni Mubarak [8], the president. About 100 legislators, including independents and members of several opposition parties, interrupted the parliamentary session by staging a walkout.”

Another blogger, Alaa Abdulfattah [9] (Ar), said opposition movement Kifaya [10] had called for the March 15 protest against the unilateral amendments being made on the Constitution by the National Party.

He said the changes to the Constitution aim to “ensure the continuation of the dictatorial rule over the country, the inheritance of succession and the abolishment of judiciary monitoring of the elections.”

This leads Cairo-based blogger Tom Gara to state the obvious [11]: He has a feeling Amnesty International isn't happy with Mubarak.

Amnesty International has described the current batch of Egyptian constitutional amendments being put through the parliament as “the most serious undermining of human rights safeguards in Egypt since the state of emergency was re-imposed in 1981.” [12]

In case that wasnt clear enough, they also said that the amendments will “enrich the long-standing system of abuse under Egypt's state of emergency powers and give the misuse of those powers a bogus legitimacy.”