Bolivia: Taking the Coca out of Coca-Cola and Onto the Seal 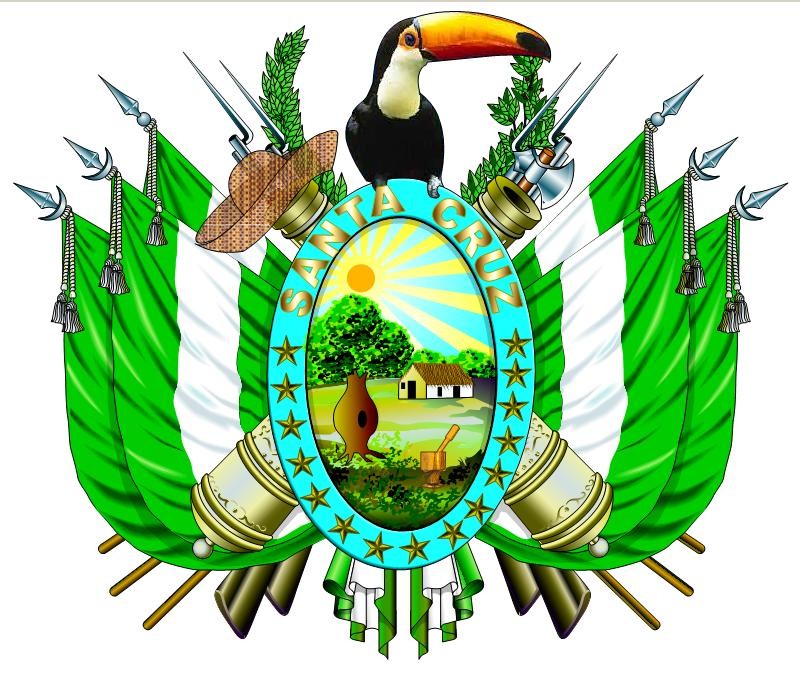 Photo created by Andres Pucci and depicts a sample seal should it only contain symbols important to specific regions of Bolivia.

Some weeks ago, some Bolivian bloggers became increasingly concerned whether the red, yellow and green of the Bolivian flag might be replaced with the rainbow-checkered flag called with the whipala. This flag is symbolic of the indigenous population in Bolivia and the Andes, and where President Evo Morales receives a large portion of his popular support. Another group that has backed Morales through thick and thin is the coca-growers. The crop, which they cultivate especially in the Chapare and Yungas regions of the country, has become more prominent in the news over the past week and may figure more prominently on the national seal.

Many of these debates regarding the coca leaf are taking place within the context of the Constituent Assembly, which has been given the charge of rewriting the Constitution. Since August 2006, the delegates have been meeting, but little progress has been made. When news does emerge, it is often about topics such as adding the coca leaf to the national seal. Martin Gutierrez, who blogs at Vitrina de Realidad Boliviana [ES] from Buenos Aires, wrote:

Among the many needs and priorities for the country, in the midst of many complicated and important topics, stupid topics appear that become of national concern. This article does not fall into giving more attention to this proposal, but rather to show the readers how much relevance this absurd topic is trying to attract.

Andrés Pucci, who hails from Santa Cruz, imagined what a similar seal might look like should it appeal to only a part of the country. The result is a seal with an Oriental feel, with animals, vegetation and sights normally seen in the eastern part of the country.

Even though coca is only grown in a relatively small percentage of the country, it has become known worldwide for its role in the manufacturing of cocaine. It also was a crop that helped President Morales rise to national prominence. He still holds the dual position of President of the Republic, but also head of the coca-growers federation. Rolando Lopez of Rocko Weblog [ES] posts the trailer of the documentary called “Cocalero” by Alejandro Landes, which focuses on the presidential campaign of Morales and his close confidant, Leonilda Zurita, who is also a leader in cocalero (coca-growers) circles.

The coca leaf continues to gain national attention. President Morales held up a coca leaf during his address to the United Nations, which did not hinder this tiny leaf from being written about in the mainstream press and other English language blogs. Now, a recommendation by a commission in the Constituent Assembly has found a way to challenge the multi-national and globally known company Coca-Cola. This recommendation indicated that since the coca leaf is sacred to a segment of the Bolivian population, that companies should not use the word ‘coca’ in their names.

However, a lot from this recommendation stems from a perceived hypocrisy in that it has long been rumored that the popular soft drink has or had used coca as an ingredient. Meanwhile, the coca leaf has been listed as a banned product for quite some time. Carlos Gustavo Machicado Salas of Guccio’s [ES] thinks that such a request is a reach, but does not see the harm in asking the company to identify their ingredients to see whether they actually do use coca in their product. The blog from the web portal, Bolivia Web, also thinks there are better and more pressing topics that these commissions should attend to, but also writes that the cola company should acknowledge whether coca is an ingredient in their cola.

Finally, the delegates from the Constituent Assembly have hit the road taking to all nine departments to hear and present ideas for the new Constitution. Miguel Buitrago of MABB lays out the schedule for the next month. He also reported on the outcome of the first of these meetings held in Cobija, Pando, which is located in the Amazon region of Bolivia. Buitrago reported that many of the attendees from the population chanted ‘Autonomy!” which is a common-heard plea from people in this region.

El Alto blogger Mario Duran of Palabras Libres [ES] attended the gathering in person, when it arrived to the classrooms of the public university in La Paz. With tape recorder and digital camera in hand, he and Willmar Pimentel, the webmaster of the page La Constituyente [ES], interviewed various representatives and asked them “which article is the priority for change or inclusion in the new constitution?” Listening to the different delegates representing various political parties, the two heard various points of consensus, such as recognizing that there exists 36 original ethnicities and the need for autonomy, although many differed on how much of that should be political, and how much should be financial administration of resources.

Water and whether it earned its place listed as a fundamental human right was the topic of the week. One blogger attended the World Water Forum, as a member of the delegation sent by the new Water Ministry. The soybean market would suffer because of a newly signed free trade agreement between the United States and Colombia, which had been a large consumer of this Bolivian crop.