Iranian Women Activists in Pain and Ahmadinejad's Trip to NY 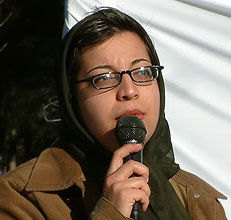 Two of 32 women activists, Shadi Sadr (thanks to Kosoof,we can see her photo here) and Mahboobeh Abassgholizadeh, who were arrested during a peace demonstration in Tehran on 4th of March, are still in prison. The remainder of the jailed women activists were set free.

Sadr is a lawyer and founded Rahi NGO to help women with legal issues. According to Women's Field [Fa],authorities shut down this legal center on Thursday March 15. The same source reports that Karvarzi Center, another NGO set up to help civil society activists, run by Abassgholizadeh, was closed by government on the same day too.

One of these jailed women shares her conversation with her interrogator in prison.

Mahbobeh Hossein Zadeh in her blog, Parndeh Kharzar [Fa], shares her experiences and conversation with her interrogator.

Interrogator: If you get free about what you will be writing
Blogger: threating, interrogation, psychological torture, humiliation, your bad treatment and prison’s bad conditions
Interrogator:Will you write that we talked about information about your life and you became speechless
Blogger: it is not important thing to control people’s telephone
Interrogator: you should praise God that parallel security ( intelligent) agents do not interrogate you.

Omid Memarian, blogger and journalist, talked with one of these jailed women’s daughter and reported that in his blog.The blogger says Mahboubeh Abbasgholizadeh’s daughter, Maryam Ommi, talked with me about her fears and worries about her mother’s arrest, investigation, and pertinent follow-ups. Omid's Interview is published in Roozonline. The blogger asks:

“Have they questioned any detainees about other individuals such as your mother?” She answers: “Yes. The interrogators wanted to separate the others from them [these two women]. For example, they have told them not to follow these [two] women. Or, they have been asked “what was your relationship with these [two] women? What were you doing for them? Why did you go to their offices?” They tried to tell the others that these [two] women were after self-promotion, but that they are good people, and this type of psychological games.”

Alpar [Fa] who praises women’s courage says at present, after 8 March, women activists may analyse to find out if collecting signatures for women campaign against discrimination and gradually extend women’s knowledge is not more important than politicizing and emotionalizing women movement?

The blogger wonders whether parents now will let their daughters join women activists?

There is no more choice

Saz Mokhalef [Fa] does not agree that the women's demonstration was revolutionary or violent.The blogger says: The reformists are in a closed circle where they can only propose voting and no other protest acts. They ask others not contact foreign press, not to demonstrate, not to chant slogans and not to carry placards…on other side, the government continues censorship, puts more pressure on women activists, who are not permitted to organize meetings in their own homes and who get fired…Can you tell me what these women are supposed to do?

It seems that some people still believe that women-related issues are not a priority and that we should first think about democratization in Iran, and then who should be made responsible for the suffering and discrimination millions of women are facing?

Iranian bloggers’ concerns are not limited only to internal affairs but also the Iranian nuclear crisis has become a big concern too. One of their recent concern is Iranian president's Mahmoud Ahmadinejad decision to travel to the United Nations in New York to explain Iran's nulcear program.

Haji Washington [Fa]says please stop Ahmadinejad from coming to the United Nations. The blogger says his presence will make things worse and it will be a grave political danger for us. Western countries do not like him. He suggests that Ali Larijani, the secretary of the Supreme National Security Council, makes the trip in his place.

Iran Paprazi [Fa] says: Somebody stop this brother? He says countries’ representatives are there to defend their national interests if you [Ahmadinejad] could have been able to defend ours, all the world would not be united against us. You [Ahmadinejad] think United Nations resolution is just a piece of paper, then why would you take this long trip…for a piece of paper.