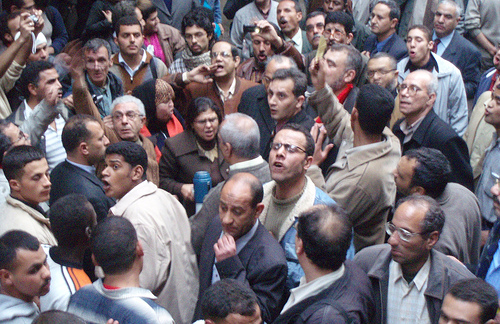 Egypt is at it again and amid little or next to no coverage in the mainstream media, its dynamic bloggers are living up to their reputation of being true citizen journalists, giving us a minute by minute break down of developments on the ground.

According to Egyptian blogger Alaa Abdulfattah, two bloggers were among more than 20 people arrested for taking part in an anti-government rally called for by opposition movement Kefaya to protest against Constitutional amendments which will allegedly give the ruling party more power.

أنا لسه هربان من مظاهرة التحرير دلوقتي، الأمن هجم بعنف و اتفتت المظاهرة لثلاث مجموعات على الأقل و بعدها بدأوا في اختطاف الشباب المتظاهرين
قدام عيني قبضوا على بهاء صابر و أربعة أخرين
محمد عادل (ميت) اتصل بي و كان فيه دوشة حواليه و كان بيوشوش بيحاول يقوللي حاجةـ بعدها تليفونه فصل، أنا قلقان يكون اتقبض عليه هو كمان.
قبضوا على 20 واحد على الأقل و أحنا بنحاول نجمع أساميهم
“I've just escaped from the demonstration held at Tahrir now. The security forces forcefully attacked the demonstration which was broken up into at least three different groups. After that they started kidnapping the demonstrating youth. In front of my own eyes, they arrested Bahaa Saber and four others. Mohammed Adel called me but there was a lot of noise around him. He was whispering to me but I couldn't hear him. After that, he phone disconnected. I am concerned that he has been arrested too. They have arrested 20 people at least and we are now trying to gather their names,” he writes.

Abdulfattah‘s concerns were in their place, and blogger Mohammed Adel, along with Mohammed Taher, were both arrested.

According to another post on Abdulfattah's blog, the demonstration, in which bloggers reported the heavy-handedness of the police in dispersing the crowds, was called for by Kifaya to protest against the unilateral amendments being made on the Constitution by the National Party. He says the changes to the Constitution aim to “ensure the continuation of the dictatorial rule over the country, the inheritance of succession and the abolishment of judiciary monitoring of the elections.”

One of the bloggers, who describes himself as a Leftist Egyptian, writes about how he too escaped imprisonment but not humiliation at the hands of the security forces.

For a comprehensive report on what's happening, our best bet would be to check journalist and blogger Hossam Al Hamalawy‘s blog – whose reporting dotted with photographs which show how the police handled the protesters, such as this: 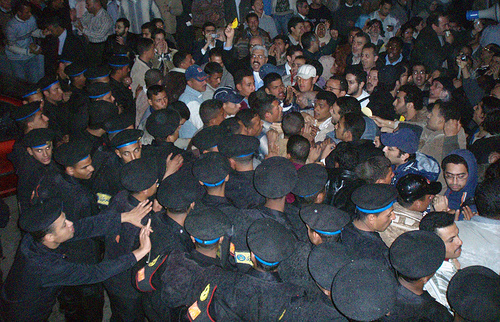 “Police cracked down on Kefaya’s demonstration against Mubarak’s authoritarian constitutional reforms on Thursday, detaining more than 35 activists.
I arrived in Tahrir Sq by 5pm… The last time I recall seeing Cairo as I saw it today, was probably in March 2003 with the crackdown on the anti-war riots. Central Security Forces trucks were everywhere. I spotted at least seven trucks by the Egyptian Museum, four at Abdel Moneim Riyadh Sq, at least three in Mohamed Mahmoud St. in front of the American University in Cairo, at least six by the Mugamma’ neighboring the US embassy in Garden City. The uniformed soldiers were not initially deployed outside their trucks, but the entire downtown area was occupied by plainclothes security agents from State Security police who were literally on every single corner, street and square in the company of three or four uniformed police generals, and some senior security officials in suits,” explains Al Hamalawy.

We were moving slowly, and still pushed by the police from our backs into Talaat Harb Sq, and then we got into another scuffle with the same rude blond State Security agent in the middle of the square. He and his friends kept pushing us in the chests, so we started a slurring match, and pushing back and fourth. A battalion of uniformed CSF troops was mobilized quickly to surround the 12 of us. It was pathetic. Bloody pathetic, to see the regime mobilizing all of those troops for such a small number. The two women lawyers in the crowd screamed at the police after we were circled, and after good five minutes we escaped running towards the Tagammu Party HQ, from where I was hearing chants.

Nora Younis, who is in the US, also continues to update her story as more details emerge.

“Reading the list at Alaa’s blog I stopped breathing. I have been also reading lists for days and days at Abdel Monem blog – ana ikhwan and everyday carries more numbers and faces behind bars. The day will come when I will read the name list of government officials and state security generals held accountable for their crimes Mr. Mubarak. Your suggested constitution is farce and you already know it. It wouldn’t hurt your aging delicate ears to hear it once more in Tahrir Square – would it? You sell yourself internationally as a secular regime while you impose on us article II of the constitution and use it to discriminate against Copts, Baha’is, other Egyptian citizens and Abdel Kereem. You sell yourself locally as a religious government while you crush the Muslim Brotherhood. You make sense no more!” she writes.

In the comments section to this link, Younis wonders:

I am shocked at the poor media coverage to the event
We used to get online photos faster than this
And this stupid report by reuters say the total was 30 protesters and 4 were arrested.. On what sense could the total be 30 if 35 were arrested? http://www.alertnet.org/thenews/newsdesk/L15364703.htm
Who was covering the event from Reuters?

Ok I was right when I said from couple of days that it would be the Spring of anger, it seems it will be one of Spring for one hell of a Summer
Just from few minutes ago I checked “Manal and Alaa.net” new pink blog “beautiful chic design at last thank God” and it turned out that today's protest of Kefaya movement against the Constitution amendments ended sadly as it was reported that 32 from the protesters were arrested among them according Alaa two bloggers Mohamed Adel who is from the Muslim Brotherhood and Mohamed Taher who seems to be from El-Gad party as I understand from his blog. Of course they weren't arrested because they are bloggers but because they are participating in the protest against the Constitution amendments, this is just a side remark

There sure is never a dull moment in Egypt!