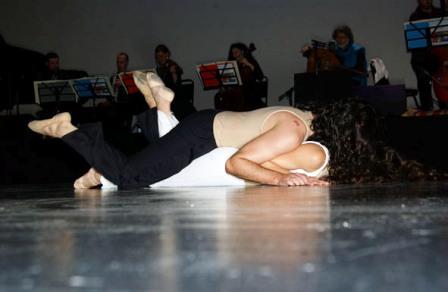 I'm all for the arts & freedom of expression, of course, but if I was an organizer, I would have made it a point to view the show first then make a judgement call on whether to invite it or not. After all, creating this controversy isn't really the wisest thing at this early stage..

Of the Lebanese dance troupe Caracalla, who used to have a good reputation, Lulu says:

I'm not sure if the band itself has deteriorated or if they just didn't bother to put up a good show for us here or if they thought we're just stupid Gulfies who don't know any better.

Gardens of Sand picks up on another post of Lulu's, and makes her own comments, about a political poem in Al Watan newspaper which criticised a pro-government Member of Parliament, Bahrain's only woman MP Latifa Al Gaoud, for siding with the opposition on a particular vote:

It saddens me that there are some folks who will side with the ‘poet’, so taken they are with the lies and brain-washed. Where Ms. Al Gaoud should be congratulated for voting her mind rather than towing the line, she is attacked for showing her allegiance to the people and not the government. When will we wake up and see our ugly truth? Until we do our situation and our beloved Bahrain will only deteriorate.

Still in the sphere of politics, Nurox refers to a report in Akhbar Al Khaleej newspaper in which the Civil Service Bureau (CSB) seems to be promising its employees not just a higher standard of living, but a better literary life:

In short, CSB is looking to improve government employees’ financial and literary well being.

So yes! Books! Lots of books! I’m updating my Amazon.com wish-list as we speak!

PS. I really just hope that wasn’t an Akhbar Al Khaleej typo.. I really do.. we could do with educating the masses.

More from an increasingly literary Bahrain next week!