China: Neighbors talking on the Net

Things are looking slightly better for China's property owners, but the right to vote has yet to reach the cities. Over the past few years property owners have done their best to pick up the slack, but sometimes have to resort to violence to get their needs met.

Do Chinese cities have residential tenancy acts? If property owner rights are so shaky, who's looking out for those who rent the apartments out? Home owners have begun organizing themselves and, according to a post from indy blogger 50mm, so increasingly are residents in a few communities in southern China's Shenzhen, just across the border with Hong Kong:

The Shenzhen Real Estate InfoNet has set up internet forums for homeowners in every community. Homeowners, in their own building's internet space, talk with each other and develop camraderie. Internet forums, to a certain extent, have become a web-based welfare for citizens who purchase commercial properties. But what about those who rent in urban residential communities? More than a few of the people who live in these communities are young and new to Shenzhen, people whose wages are relatively low. They have intense needs to talk with others online, but Shenzhen has yet to see the corresponding internet forums for urban communities because these residents lack a sense of belonging to their own communities. Just like the wind blows the sand, they tend to flow in different directions, moving often. This is why someone has yet set up a bbs for residents in urban residential communities.

Is it really so? I have one friend called Ah Rong, she's lived in Xiasha for twelve years and has become very good friends with the landlord. When she goes into the neighborhood, most people know her. She has watched the area slowly go from being a small hamlet on the city outskirts to becoming a noisy, populated fortress. For people like Ah Rong who have developed a strong dependency on Xiasha, she says that continuously moving from place to place would be very inconvenient for her. 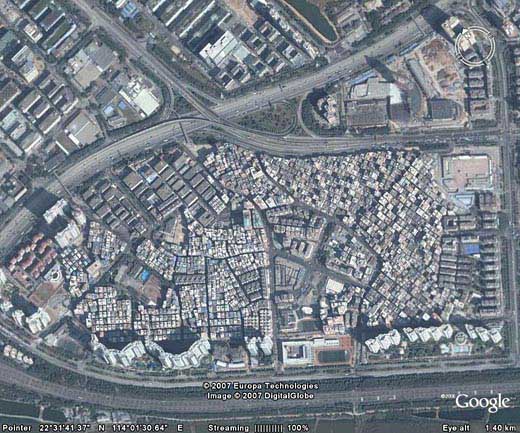 “Satellite photo of the Tri-Sha Area”

Xiasha lies South of Binhai Avenue in Futian district, the area west of Xinzhou road. Several neighborhoods are gathered nearby: Shatou, Shawei, Shazui and Shatou, all divided between Shangsha (upper) and Xiasha (lower). These neighborhoods are all pressed together. With several hundred thousand residents between them, there are many people like Ah Rong, non-locals, but with the time spent living here not long.

Actually, for people having just moved into an urban residential community, they too need an information base, telling them which shops’ noodles taste the best, which footbath recreation centers have the best service, where renters can find information on leases. I recently saw that there is such a Tri-Sha Community website [zh], and they provide just this kind of service. One young user named Benny has set up a BBS forum for renters in the urban residential communities centered around Shatou area which provides an internet exchange platform. The forum is divided into two main sections, local information and entertainment/recreational information and over a dozen smaller sections. A number of recent posts have been written by one user named “Hu Luo Ping An”, with names like ‘Today I went past the Xiasha army base and almost got bit by a wild dog!’ and another where user ‘San Sha Yi Shui’ complains, ‘Today I was walking in Xiasha Park and got my cellphone stolen.’ For now it seems there aren't a whole lot of people active in this forum, and just a couple dozen online.