Cricket World Cup 2007 through the eyes of the bloggers

The 9th World Cup cricket started with a colorful opening ceremony in the Carribean islands. The tournament is scheduled for 51 matches in a span of one and a half months. The itinerary can be found here, the tickets here, and here is the official website. (via Cric Blog)

The third world view lists cricket blogs and portals from South Asia. A compilation of Cricket World Cup 2007 TV, Radio and Internet live Broadcast links can also be found there.

Mahesh of i3j3 cricket posts some images of Mello, the world cup Mascot. 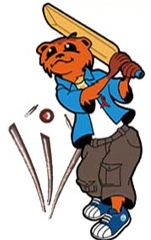 A Voice of Colombo posts details on the Cricket World Cup venues, where the matches will be played.

Do you know what Sri Lanka had in 1996 that they don’t have now? ‘The element of surprise’ is the answer tells Dark Horse. Bangladesh aims to enter the big league says Miraz at Bangla Cricket.

The Commentary Box reports that the world cup trophy was damaged in Kolkata while handing over to ICC earlier last week. Scribbler on the net reports the umpires on the ground will hear the faintest of edges via hearing aids. Hope the players don't appeal to him closely.

Google has launched an official blog, which will be authored by former Indian cricketer Krish Srikkanth.

No doubt the world will suffer some loss of productivity, because millions of cricket fans worldwide will spend hours in front of TV as claimed by a British report. However Samir in Eye on Cricket says this won't have an impact on the Indian economy.