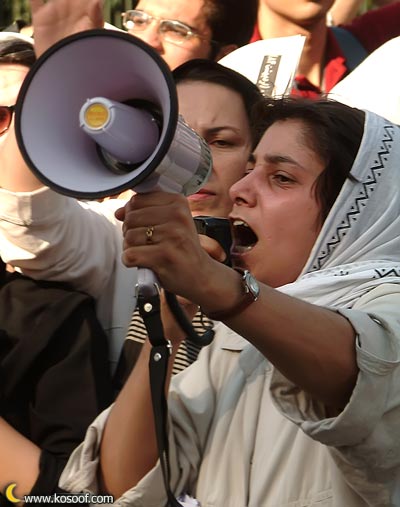 Iranian women’s peaceful protest movement on Sunday was repressed violently by police and more than 32 activists, including several journalists and bloggers, were arrested.Thanks to Kosoof you can see some photos of these activists who got arrested. Iranian bloggers have provided details about what happened, photographs of those arrested and the reason for the protest.

Chronology of a Repression

Khorshidkhanoum briefs us of what happened:

50 of the women's rights movement activists were arrested in front of the Revolutionary Court in Tehran.The security police forces attacked a peaceful gathering of women's rights activists that had taken place at 8:30 am in front of the Revolutionary Court in Tehran in objection to the recent governmental oppressions and the summoning of some of these activists. The police forces who used violence to scatter the crowd, arrested at least 21 of the protesters.

Nooshin Amhadi Khorasani, Parvin Ardalan, Shahla Entesari and Susan Tahmasebi—five prominent members of the women's rights movement—who had to attend their court hearing left the court session in support of their fellow activists. They, too, got arrested upon their departure from the court.

The blogger adds that the police officers hit Nahid Jafari's head against the police van and as a result of such violent actions, her teeth broke. The officers then refused to take her to the emergency room.

Azadeh Pourzand says the organizers of the two major current campaigns, Stop Stoning Forever, and One Million Signatures to Change the Discriminatory Law, have been among the women rights defenders by the National Security Police.

She called upon readers to sign a petition and ask judiciary authorities to liberate women activists. In this petition we read:

Your Excellency,We, the undersigned, are writing to you to express our great concern about the recent persecutions and prosecutions of the women’s rights defenders in Iran. We are especially dismayed at the news of the recent arrests of 38 women’s rights defenders on March 4, 2007, in Tehran while gathering in a peaceful protest in front of the Islamic Revolutionary Court.

Franaz who reports about this event from the beginning says that one of the arrested women was beaten by police and her tooth got broken [Fa].

Jomhour says Ahmadinejadism is against women's rights and again their demonstration was repressed. For this blogger it can be a warning for the March 8 demonstration to mark the International Women Day[Fa].

Omid Memarian reports an eye witness account in his blog. There we read:

in Zanane Solh (Women of Peace) website, an eyewitness who attended the protest has written her account of the events. “After picking up the placards, gradually uniformed and plain-clothes police force, one of whom was a woman, showed up. The police approached us and asked us to leave because your gathering does not have a permit. One of my friends said that according to the Constitution, peaceful gatherings don’t need permits. The police argued that your gathering disrupts traffic on Moallem Avenue. They attacked the protestors’ line. 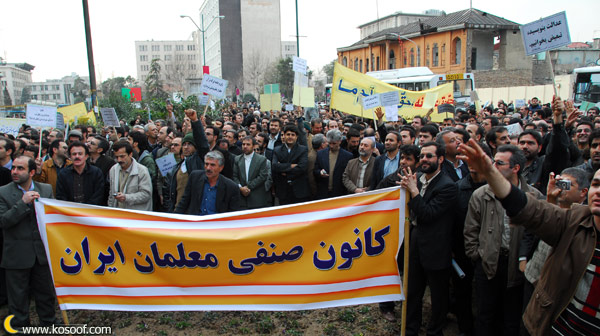 This Saturday thousands of teachers demonstrated in front of Parliament in Tehran.Kossof, a leading photo blogger has taken photos of this event.

According to Kargar blog about 6,000 teachers protested and asked for better conditions and a raise in their salary[Fa].The blogger said speakers in this demonstration recalled that 700,000 teachers live in poverty in Iran. Ahmadinejad politics were criticised and teachers threatened that they would launch a strike.

Interior problems such as repression and economic issues can become worse if a war between Iran and the US breaks out. There are many Iranians and Americans who do not trust in US government's declaration that there is no war plan against Iran.

Nikahang, a leading cartoonist and blogger, shows this feeling in one of his cartoons seen here. 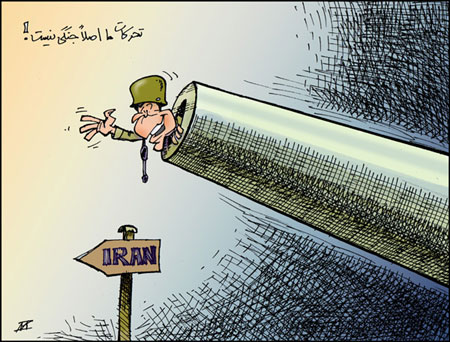 Forever Under Construction blog informs us that not only Iranian but many Americans are worried about a war between the US and Iran.The blogger says that peace is peoples’ preference, war happens against all the common folk wisdom. It is a decision often by a small number of elites, for them; and for profit. The average person will still buy the idea, enlist and be hopeful that this is the one which “ends all wars”.

Some of the strongest antiwar literature comes from the military itself, such as Major General Smedley D. Butler. I came across the VoteVets.org, founded by a group of Iraq War veterans. Whoever likes reading, there is plenty of interesting material in their website’s Newsroom. They seem to raise questions about principles for a change: War is not the Answer.

Ahmad Shirzad a former reformist deputy in the Iranian parliament wrote that we should, in Iran, look who gets the profit and money from buying centrifuges and other nuclear materials[Fa]. He adds nuclear investments have not been transparent and parliament did not know about it at least for 24 years. He adds nuclear technology is attractive for Third World countries because it is considered as a short cut to development. Shirzad says that countries which harbour this dream, think they can catch up with developed countries overnight.