Today is the International Mother Language Day, an annual event in UNESCO member states to promote linguistic and cultural diversity and multilingualism. This is mostly the international recognition of Language Movement Day called ‘Ekushey February’, which is commemorated in Bangladesh since 1952, when a number of Bangla-speaking people were massacred by the Pakistani police and Army in Dhaka.

Ekush is Bangla for 21, and Ekushey means 21st. In Bangladesh, ‘Ekushey’ is synonymous with ‘Ekushey February’, the day when Bangladesh celebrates its Bangla Language Movement and honors those who sacrificed their lives in its name on 21st February, 1952.

Pinaki lists the fallen heroes and the contributors of the language movement.

A bit of history: In August 1947, dividing India, a new state called Pakistan, comprising two far-flung wings (1600 kms distance) in the west and east separated by India, emerged on the world map. The ideological basis of that strange phenomenon was the absurd and pernicious two nation theory of Mohammad Ali Jinnah that ignored such basic elements as language and culture and considered religion as a bond strong and sufficient enough to transform a people into a nation. The language of the people of eastern wing of Pakistan, and they were the majority, was Bangla. It had a rich tradition of literature of over a thousand years. The Bengalis also had a highly developed culture that had little in common with the culture of the people of western wing of Pakistan. When in 1952 the neo-colonial, power-hungry, arrogant rulers of Pakistan declared that ‘Urdu and Urdu alone would be the state language of Pakistan, the people of East Pakistan underwent an uprising known later as the Language Movement. (Source 1, 2 ) 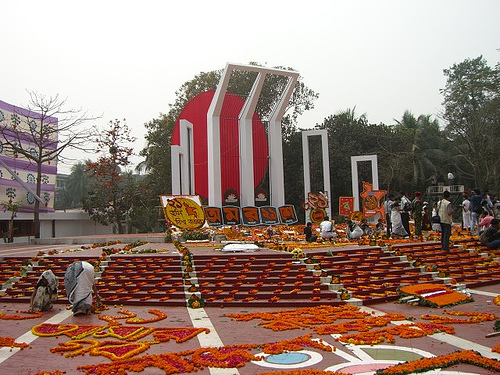 To commemorate this movement and the fallen ones, Shaheed Minar, a solemn and symbolic sculpture, was erected in the place of the massacre. The monument is the symbol of Bangladesh Nationalism. Each year on 21st February, starting from early morning, hundreds and thousands of people walks in bare feet to pay their respect to the martyrs singing remembrance songs with garlands in hand at the Shaheed Minar. The men and women wear only black and white cloths.

Jahangir Alam posts some pictures of how Ekushey February is celebrated in Bangladesh.

The Ekushey Book Fair which has become a part of Bengali culture and tradition is arranged in the Bangla Academy premises in Dhaka city every February since 1972 in observance of the ‘Ekushey February’. Ershad posts some photos of this year's Book fair.

The theme of International Mother Language Day in 2007 is the linkages between mother tongue and multilingualism.

Global Voices Online also supports and promotes the diversity of languages. It is getting prepared to establish own translated pages of its main English site contents in Bangla, Chinese (simplified and traditional), French, Portuguese, Russian, and Spanish languages. This will enable people writing/speaking in one language being read and heard by speakers of other languages.