Bangladesh: Can the power of one save the nation?

The hottest topic in Bangladesh now is that the Nobel Laureate Dr. Muhammad Yunus has expressed his intention to start a political party and run for the next election. In an open letter he has asked the people to provide their support and feedback to him and suggest how he can organize the party from the grass root. 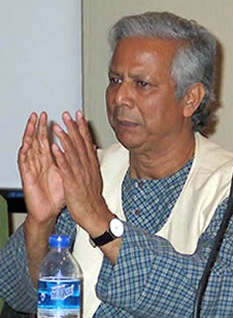 Salam Dhaka says this move of Dr. Yunus will draw a new equation in Bangladesh politics, which is battered by bitter political acrimony between the major parties and their devastating political moves. Some people welcomed his entry and wished he can be successful like Dr. Mahathir Mohamad of Malaysia. Trivuz comments that he has the ability to break the tradition of nominating corrupted musclemen or business persons for election and winning by spending millions of black money. So people will have an option to support credible and competent politicians under his leadership. However there are also apprehensions whether he can do well in Politics. Journalist Shiblee Noman, while answering Yunus's letter, questions his experience in politics and warns that if he thinks he is the savior of Bangladesh then he is wrong. In democracy the power comes from the grass root, what people wants. So the question is whether Yunus is really being wanted by the public as a politician or the notion is imposed.

Addafication thinks that not a good man but a good system can save the country:

Dr.Yunus has an important role to play in Bangladesh society. But it is not in politics. His role is best fulfilled as part of the civil society, to strengthen it in lieu with politics which has to be strengthened by politicians, not civilians merely because they might be bigger achievers. No country is led simply by its most prolific achiever. We dont have to be too. And no country's problems can be solved by one man's initiative, or even two or three. It is the institutions that have to be cleansed.

Bangladesh is back to normalcy after the declaration of the state of emergency on the 11th of January. There is an operation of the security forces going on against corruption and and many powerful ex-members of parliaments, ex-ministers and business tycoons are behind the bars under the new state of emergency act. The general people are delighted by the prospect of cleansing the political arena. Drishtipat blog confirms The Economist magazine's latest assertion on Bangladesh ‘Everybody but the politicians are happy’. People are excited with the performance of the new caretaker government and are even calling it a ‘A silent revolution by the people of Bangladesh’. The 3rd world view analyses the mass mail going round in the mail boxes of Bangladeshis urging for a referendum to make the interim government stay for four years to help them clean the house.

However, if your only tool is hammer, all your problem can look like nails. People are questioning the caretaker goverment's drive for cleaning up slums and forcefully evicting these people and breaking illegal roadside structures which were used by poor businessmen as small shops. The problem is that they are not providing any alternative place for the slum dwellers or compensate the small businesses atleast for now.

Addabaz blog is supporting the clean up drive whereas Drishtipat group blog is vocal about the evicted people's rights.