A Week Goes by in Kuwait 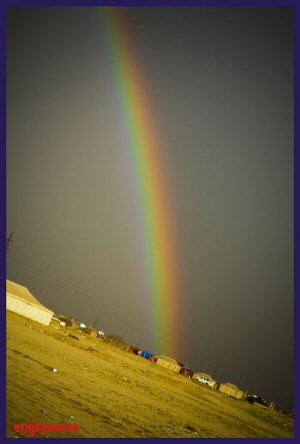 Kuwait enjoyed nice weather this week. A lot of people grasped the opportunity and went out camping in the desert.

Engineeroo was no different. He joined the scores of people who erected tents and took with them their food and drinks to enjoy the beginning of spring. Not only this but he also captured a rainbow !

Yesterday when I was in our camp(المخيم) after the lovely rain … rainbow was shown a full half circle…. actually, it was two of them and I captured both…. :) here is one of them and you can See my shadow … ;)

Missed the InfoConnect Trade fair? Chillnite has got the run down on it over at his blog Chillnite.

Just came back from InfoConnect 2007 exhibition at the Mishref fair grounds. Why am I not surprised to see the lack luster exhibition? I don’t think Kuwait’s IT sector is mature enough to be part of any of these exhibitions held in Kuwait.

The Criticizer at MacaholiQ8 talks about another addiction he has – smoking Shisha! But there is bad news about his favorite joint.

Most shisha smokers and “gahawi” riders know Digol Cafe so here are the news; my ultimate hang out will be closed down because the building is scheduled for demolition within the next few weeks.

We had a Japanse musical show in Kuwait last week and Joeymaniaa has pictures and a small report about it.

Wed 31-1-2007 : the place was to crowded even people was standing the whole show and some of them sit on the floor, i didn't have any idea of what would i see.

K The Kuwaiti gives us more car coverage. This time, Ferrari's 60th Anniversary, the Ferrari day was celebrated in style in Kuwait.

I finally got the time to post my pictures of the ‘Ferrari Anniversary’ on my Flickr page. My camera ran out of battery and I started using a friend's camera.
Al-Zayani had a ‘Ferrari Day’ to commemorate the 60th anniversary of Ferrari worldwide (1947-2007). They are basically do stops around the world with convoys of Ferraris driving around.