China: A far out tribe

A lot can be said of the recent phenomenon in China of outdoor enthusiasts finding each other through forum-type websites, only meeting in person during the regularly-scheduled camping or hiking trips many of which bring out hundreds of their members, and where this movement overlaps with China's blogging movement.

For Cat989-based journalist-blogger Two Keqi(2可器), the great outdoors are never too far from his blog, and here's his post [zh] on a recent trip he took into the far-flung forests of Southwestern China's Guizhou province to get some offline time, and what he found there. 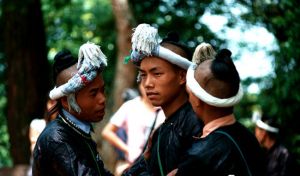 The Miao people of Basha are located in Southeast Guizhou province's Congjiang county, numbering just over 2100 people at present. Following 1949, they were the only ethnic minority officially allowed to preserve their gun-carrying tradition, and for this have been called “China's last gunman tribe”.

After Basha was “discovered” by a French couple in the early eighties, the Miao people of Basha have gradually broken out of their isolated way of life, and their unique culture has become known to the outside world. Today, Basha for the most part still hasn't entered the view of the conventional tourist, but being a stop not easily missed on the famous Qiandongnan trail, receives more than a few backpackers each year.

When I went, though it was over the spring festival holiday, there weren't many tourists, just a lot of donkeys. On the road into Basha there's a ticket office, a few overturned tree stumps cutting off the road. After the stumps a few tough-looking guys rolled by, with strange hair and clothes, carrying rifles or machetes. The first thing you think of is like they say on the internet: “Oh god, I've run into bandits!”

These are the warrior men of Basha, who all year round brandish their broadswords, pack their rifles and, it's said, can shoot like the gods, climb mountains and trees like they were walking on flat ground, and are extremely good hunters. Aside from their knives and guns, they also carry a tobacco pouch, an ox horn and a gourd full of bullets; they wear dark collarless clothes that wrap around from the right and fasten with brass buttons, baggy straight-cut pants, and dark cloth waist-pouches. The black material they use feels a bit like the rain jackets that we wear, and also works well in keeping the water out. It appears dark blue, but gives off a violet light. The art of making this kind of fabric is extremely complicated. It's said its waterproof nature comes from a layer of egg white on the material.

This kind of garb is somewhat similar to that of the Dong ethnic minority, but quite different from other tribes in the Miao nationality. And their hairstyle is one of a kind: the men have have most hair on their head shaved off, only leaving a spot in the middle which is to be knotted into a bun like a big, thick stick running from the crown of the head to the back. Called the ‘family stick’, though done differently, it looks almost exactly like Samurai hair. They say this once attracted Japanese scholars to Qiandongnan in search of their roots. 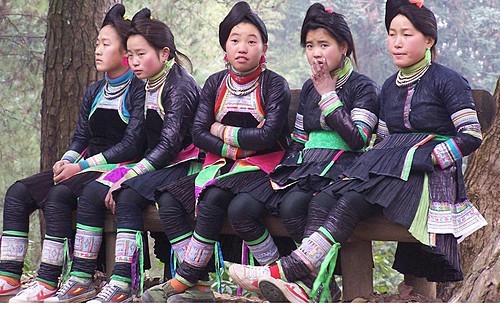 Whether or not the Japanese are descendants of the Basha Miao people can't be said for sure. According to legend, the Basha Miao's ancestors were thought to be descendants of Chi You‘s third son. At the time, Chi You was defeated by the Emperor, and the leading tribe began a millenium-long march to the Southwest. The Basha Miao's ancestors were the frontline troops in the large migration, one branch of the nine Li tribes. They blasted through mountains to make roads, fought fiercely with bears, courageous and then some. Later, some Miao began going on expeditions. After having been defeated, this section of the Miao population began running drifting around. Around a thousand years ago, they began settling in their current location. There's an unproven theory, that the reason many Bashaers are surnamed Gun [滚: pron. ‘goon’, meaning something a tad more crude than roughly ‘go away’] because after they were defeated, they took off.

Basha Village is hidden away in the forest. As you enter the village, your eyes are filled with waterside houses made of wood spread between towering ancient trees. For thousands of years, generations of Basha Miao have lived here in this forest cut off the world, finding all the basic necessities of life in the hills, forests, rivers and valleys. Trees became the totem of the Basha people, and their ‘family stick’ hairdo is even comes from the shape the trees. Their reverence for trees can be seen by the way they live. For every tree they cut down, they must plant one seed; when children are born, the parents will then plant a tree which, when one dies, is then made into their coffin, and with each burial, another seed is planted, representing that their life will begin anew. Because of this, Basha village is full of trees and no graves are to be seen. Their ways of worshipping, cherishing and using trees has led Basha to be covered over by trees, and thus earning the place it's name. Basha, in Miao language, means ‘place of many varieties of vegetation.

In a clearing within the forest, Basha's men and women invited us outsiders and guests to dance with them to their reed pipes. Although Basha men look rough and tough, they're actually quite warm-hearted, ever-obliging us visistors’ requests for photos with them. After the reed pipe dance finished, the captain of the rifle squad Yuanliang Gun led the gunmen to give everyone a rifle salute. Their guns are both thin and long, with a curved grip, but no stock, a bit like the European powers used at the beginning of the 19th Century. First they danced for a bit, then stood in a line, pointed their guns up to the sky, and then there was a huge bangbangbangbang. A bit of which whitish smoke poured out of the barrel and drifted off, leaving the smell of gunpowder hanging in the air. 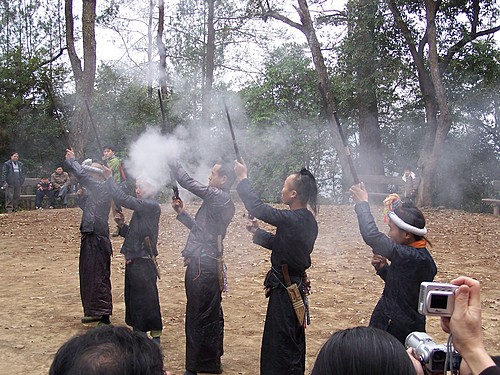 Finished shooting, two Basha guys walked over. One squatted and the other, holding a foot-long sickle in his right hand, dipped it in the water basin and with his left hand lightly held the other man's head, shaving the hair off both the left and right sides of his head using no shaving cream and without rinsing.

The crowd watching in amazement as the sickle adeptly whisked across the scalp, making just the faintest sound and patch after patch of hair dropped, revealing the white scalp underneath. In just a few seconds, a brand-new “family stick” appeared before the eyes of the audience. 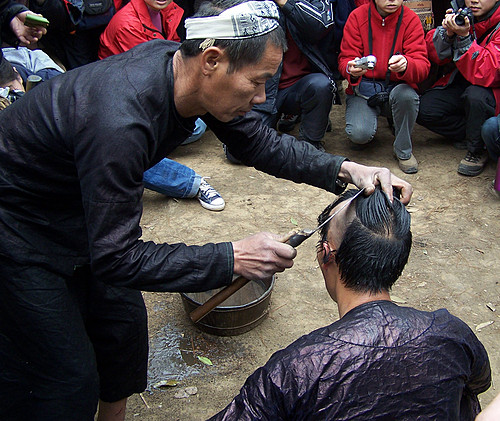 Some Googling around shows that Two Keqi is not the first blogger to have blogged the Miao. Xitek user K6688 has an excellent assortment of photos of the arduous lives the Basha Miao live outside the reaches of modern society. Via Sinosplice.