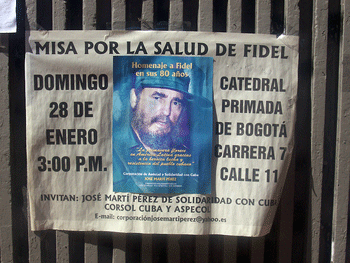 It's unlikely that Cuban president Fidel Castro will be any less of a polarising figure in death than he's been over the course of his long and colourful political career. Since the announcement of his illness and the passing of power to his brother Raúl at the end of July 2006 [2], Castro's state of health has been a closely guarded secret, the silence punctuated by occasional — and conflicting — reports coming through channels such as a Spanish news daily [3] and Venezuelan president (and close Castro ally) Hugo Chávez [4].

While some chuckle (ES) over the irony of a computer virus contained in an e-mail bearing the subject line “Castro is dead” [5] and others plan a party to be held in Miami's Little Havana when the Cuban president finally meets his end [6], at least a few Colombians are praying for Castro's health, as demonstrated by the photo of this poster [1] — uploaded today by Flickr user Julián Ortega Martínez [7] — advertising a “Mass for Fidel's Health” taking place at Bogotá's cathedral on January 28.