The Blogospheres on Big Brother, Shilpa Shetty, Bullying and Racism 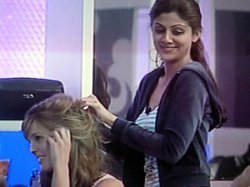 The racism allegations surrounding a popular reality television show in the UK – Big Brother appears to occupy a lot of real estate in the blogosphere. Big Brother airs on Channel4, which is a public-service television station, broadcast in the United Kingdom Well, regardless of whether the remarks made in the Big Brother house were racist or not, they've got the Indian and the UK blogospheres talking about racism in all its contexts and people discussing their own experiences as Indians or Brits. The person seen as the victim is Shilpa Shetty, an Indian actor. A thriving discussion at Sepia Mutiny with all kinds of opinions being voiced about “Bigot Brother”. A very active discussion is on at Pickled Politics. From one of the comments

Fact is: there has been racism on television. The Asian community (for once) united to condemn it.
Give me hysteria over apathy any day.

Bloggers are discussing if it's racism or just plain bullying. While many bloggers had in half-seriousness asked why this actor was choosing to appear on this show in the first place, the discussions now are mostly about Channel 4's take on the issue, and the behaviour of the housemates towards Shilpa Shetty.

On the allegations of racism.While they’re definitely being ignorant, stupid and mean, the fact that the person on the receiving end of all this is brown adds a racial undertone to the entire thing. As someone on the news said today ‘If they were making fun of a French girl’s accent they wouldn’t call that racist would they?’

Bollywood Press on the amount of press Shilpa Shetty is getting. Classically Liberal remarks that the Indian Government appears to have no other important issues to take care of. Broadcastallense has some views on the show which has sparked protests from people who have never seen it.

At the end of the day, it's unlikely Channel Four will do much about the whole thing other than make a few cliched ‘statements’. They've got exactly what they wanted.

Bock the Robber has a take on the supposed class clash at the Big Brother house. Some others approach with a certain caution and even a little cynicism.

Being a victim of racism is turning out to be a win-win situation for Bollywood actress Shilpa Shetty. No publicity is bad publicity. Who would have thought that a story on UK's Celebrity Big Brother would hog headlines even in international media.

Guy Fawkes’ Blog on Gordon Brown's response. Theadagetimes remarks on how Gordon Brown's visit to India has been shadowed by the controversy and how Channel4 seems to have benefited from the increased viewership.

In large sections of the media, Brown’s comments on Shetty were given more prominence than his speech on globalisation and economic issues in Bangalore on Wednesday.

Diretribe reminds us that one can only expect so much from reality television. Paperghost.com remarks how people assume that racism can be excused as ignorance or stupidity.

People are trying to excuse these comments on the grounds that they display stupidity and a lack of education, rather than some form of actual racism. Oh well, that's alright then. Let's tolerate racist remarks on the basis that they're coming from idiots as opposed intelligent racists!

And while Channel4 definitely seems to have increased viewership, some bloggers are urging others not to encourage the show by switching the telly off.

L'Amour et le crâne wonders why racism is being excused under the garb of silly-girl-bitching. Rationally Speaking on racism and violent anti-racism as witnessed by the protests in India.

A whopping 19,300 viewers have filed complains with the broadcaster, which means that way too many people have too much time on their hands, or simply have their priorities a bit off, considering everything else that is happening in the world (including in India itself, of course).

World of India! comments on how Indians are racist themselves. Sonia Faleiro does a piece on the celebs at the Big Brother.

And Thought Experiments sums it up thus

The Big Brother Racism story reveals another terrible truth about our world – it can no longer be satirised. The simple facts of the case are so wildly implausible, so deliriously stupid, that satirists can only stand back in awe and admiration. Some very coarse individuals on a TV game show that involves being imprisoned inside a house express, in terms of laughable ignorance, a degree of racial prejudice against another inmate. Professionally outraged people become professional outraged and Gordon Brown's visit to India is turned into a ludicrous pantomime in which people burn effigies of somebody or other connected with Big Brother, newspaper headlines crow about the racism of the British and Brown himself has to keep grinding out the platitudes about what a terrible thing racism is – yadda-yadda-yadda.

Desicritics.org remarks that while the intent maybe to bully, its form takes a racist colour.

The issue isn't just that Shetty is being subjected to intimidation – that much is obvious. The issue at stake here is that for whatever reasons that might have caused the coven to develop a dislike for Shilpa, they are choosing to act on that by picking on things that are blatantly racist. To refuse to identify her by her name, to generalise about Indians as a whole on the basis of their interactions with her, to tell her to “f*****g go back home”, and to “go back to the slums” is nothing if not racist. The motivations behind making those statements may or may not be racist – that is not what I question at this point. However, the manner in which the feelings of the coven are verbalised is definitely racist, and as a consequence totally unacceptable.