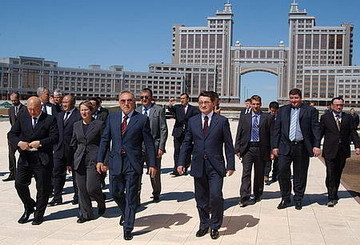 “The Government resigned… It was expected for so long that I am not even surprised…”, wrote Slavasay in Livejournal community on Kazakhstan politics.

On 8 January Kazakhstan Prime-Minister Danial Akhmetov resigned, as did the whole Government. Not much change was expected though: “In Kazakhstan's autocratic presidential system, changes of prime minister usually signal a change of tone rather than a change of direction, and the change in prime minister will not bring about a more liberal political landscape or less interventionist economic policies”, wrote the Economist.

Ben of neweurasia has put together the responses of English-language bloggers on Global Voices. For Russian-language bloggers, whose reactions you will see in this roundup, the news was an opportunity to bet on possible changes in the government, gossip about personalities and connections between them, and talk about the new Prime-Minister Karim Massimov, the first ethnic Uighur PM, born in China.

Livejournal user megakhuimyak follows the Kazakhstani politics and admits that he likes being provokative in his blog. Before the new Prime-Minister was appointed, he wrote (RUS):

This is it, Karim Massimov will be our Prime-Minister! Why? Our 01 (President) needs someone not involved into internal fights. Massimov has a strong support from China, where our policy is heading.

Kazakhstan still has a ceiling for non-Kazakhs: either the position of deputy Prime-Minister, or the deputy of the Speaker of the Parliament. Even if the President suggests Massimov, the move will be sabotaged.

Do you really think Massimov is not related to the “family”? It was in the press.

Everyone is, but at least he was not fighting them :)

On neweurasia, Adam Kesher made his forecast on future distribution of seats in new government (RUS). He wrote that Massimov, a new PM, was responsible for forming a positive image of the country in the Kazakhstani administration, taking part in image supporting conferences and advertising campaigns in Western media (and possibly, even organising them). As it is known from the official documents of US Ministry of Justice, he also coordinated the work of Washington lobbists. Massimov is the only state official who has his personal website.

After the composition of the new government was announced, LJ user slavasay noted that at least three Ministers-long-livers have left the government. He wrote (RUS):

Kasym-Zhomart Tokaev has worked in the Government (Prime-Minister, Vice-Premier, Minister of Foreign Affairs) for 12 years and 3 months. Second place.

Mukhtar Altynbaev has led the Ministry of Defense (with a break) for 7 years and 11 months. Impressive results.

LJ user tormozz found it difficult to follow the changes in the Government (RUS):

Oh, this reshuffling… The same people, different places – one can hardly remember who is who now … Poor journalists … These people will keep making the news, but on different positions… :) It will take some time before journalists start associating people with their new positions.

Adam Kesher briefed on the new Ministers on his article on neweurasia (see the English translation here).

… It is interesting that when the president introduced Masimov to the Parliament, he did not mention his ethnicity, got away from the text and started his musings about multiculturalism in Kazakhstan. Because ethnic tolerance is often presented as regime’s “brand”, it is strange that they did not mention that the new Premier is not Kazakh. The government has once been led by a non-Kazakh Tereshenko back in the 1990s.

He is surprised to see a “liberal” who once supported the dissolved “Democratic Choice of Kazakhstan” in the new Government. He concluded:

In general, the balance of interests between the three strongest clans (the families and people close to the President's sons-in-law) in the Government is preserved, which should indicate that the president still has a firm grip on the situation.