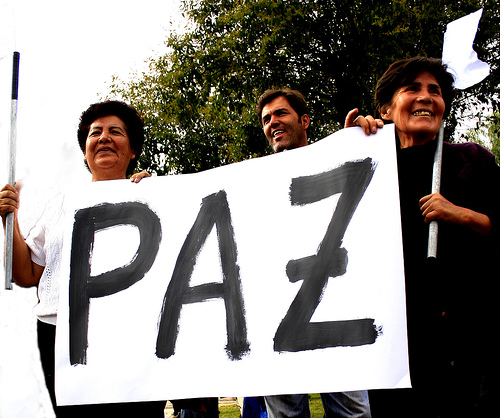 “Pueblo vs. Pueblo” (People vs. People) is how the blogger at Voz Boliviana [ES] described the clash between citizens in Cochabamba, Bolivia’s fourth-largest city and left many lamenting and angry at the course of events, which left 2 dead and close to 200 injured. It started with a protest in the city’s main plaza, 14 de septiembre, demanding for the resignation of the department’s prefect or governor, Manfred Reyes Villa, who stands in opposition to the national government. The prefect wished to call for a department-wide referendum on autonomy, as he argued that the departmental governments should have more economic and political autonomy. In mid-2006, the department had voted “No” on the nationwide referendum on this very subject, which passed in 4 of the 9 departments. Many in the government’s social-movement base, including members of the coca-growers federation saw this call as an act of provocation.

The coca-growers originate from the rural part of the department called the Chapare, and they descended to the departmental capital, Cochabamba, whose central precincts incidentally voted “Yes” for autonomy. In the plaza, the group clashed with police, as there are arguments as to who provoked who, and as a result the governmental building was burned. In addition, blockades began to materialize at various strategic points across the city that did not allow for free transit or goods to enter the city. There were reports that some of these social movements ordered the shut down of water flow to the city. As these actions continued to pile up, a group calling themselves “Juventud por la Democracia” (Youth for Democracy) announced a peaceful march, but it soon became one of confrontation. They resolved that if the groups occupying the city’s main plaza did not leave, that they would be removed by force. Late afternoon on Thursday, the two groups met along various points in the city main promenade El Prado, where two Bolivians were found dead, one killed by a bullet wound and the other macheted and strangled.

This course of event set off a multitude of reactions by the Bolivian blogosphere. Many had their own versions and interpretation of the course of events. Questions arose over who provoked who and who was at fault. Alvaro Ruiz Navajas returned to blogging at Off-Topic with his own version of Frequently Asked Questions.

As the blogger continues on in Voz Boliviana he/she firmly states that the conflict was a clash between the middle/upper class and the poor.

What happened yesterday in Cochabamba is no longer a question of political leanings or ideologies. The people that clashes yesterday were the middle to upper class and the poor. For the latter, participating in blockades, strikes and marches is nothing new..their sad lives due to the economic situation leads them to risk everything with nothing to lose.

Overwhelmingly, the Bolivian bloggers hoped that the situation would settle down and many lived the day firsthand. Gabriel Iriarte summarized a phone call he received that day that demonstrates the levels of high emotions that ran that afternoon.

Today at 16:45, I received a call on my cell phone, I still have the number registered – 70741740. A male told me his name, last name Coronel. He said, “Gabo, let’s go the march for democracy and let’s go hit campesinos.” I don’t know how this guy had my cell phone number or how he knew my name. During the surprise, I didn’t know how to respond and I said that I didn’t know anyone by his name, then I hung up. I suppose he confused with another Gabo, but that’s not the point. Cars drove up and down the North part of the city with speakers calling people to join the march. That’s where the entire debacle started that left close to 100 injured and 2 dead. The prefect is a shameless manipulator that does not care about sending civilians to expulse the famers from the city (they are residents of the department and have the right to protest in the capital).

Flickr User Jorge aka miskifotos was on the ground in Cochabamba taking pictures and providing descriptions. This photo is of the group called Youth for Democracy marching down the Liberator Bolivar avenue. Youtube user Araoza also filmed short clips from the battle scene. 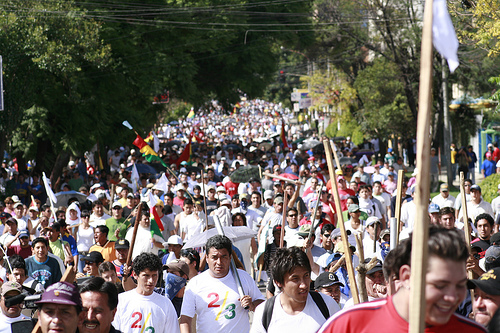 This aggression towards each other did leave one from each side dead: Nicomedes Gutiérrez (34) y Christian Urresti Ferrel (17). Andres Pucci published an letter, which was from an unconfirmed source from a former classmate of the killed youth. The anonymous blogger Morir Antes Esclavos Vivir writes a tribute to young Christian.

Many bloggers drew the connection between the fact that many on the pro-government side were coca-growers, whose maximum leader is President Evo Morales. The current Bolivian president rose through the political ranks as leader of these groups, and was reelected even after obtaining the country’s highest office. Hugo Miranda aka Angel Caido [ES] faults the president for the conflict, as he could have easily ordered his base to retreat and things would not have had occurred the way that it did.

The blame placed on the President continues, but also some hoped that he could be one of the few that could actually cease the violence. Upon his return from Nicaragua where he attended the inauguration of Daniel Ortega, he participated in a press conference. Many hoped that he would say just the right things. Sebastian Molina of Plan B [ES] summarized what Morales did say and what he did not say. Molina believed that the speech seemed to leave out a lot of mention of the deaths, injured, attacks on journalists or that peace should return. Others found it ironic that on dates that violence would erupt in Bolivia, that Morales would be nominated for the 2007 Nobel Peace Prize. Willy Andres didn’t think the Morales has done enough to “promote peace.”

Some bloggers are trying to do their small part in standing in solidarity with peace. Estido of Cronicas Urbandinas [ES] created a solidarity logo for others to place on their blogs. Sergio Asturizaga of Así como me ves me tienes [ES] admits that the President is losing some support, “The government thinks that it still has 54% of the votes, but it forgets that it was not just the rural population that voted for them. There were others that voted for a political change for a change in the people.” 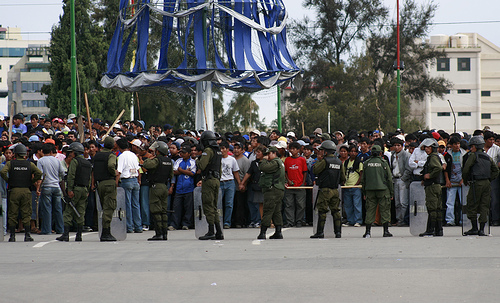 Some bloggers found themselves supporting Reyes Villa without regard whether one supports him, but because he was elected democratically. Isabella Fuente of Ergoth [ES] said:

Manfred Reyes is elected democratically, regardless if I like or dislike him, he is the Prefect. As Jose Gramunt said, “It is not like we ask for sympathy for the Prefect, but no one can argue that he was elected in fair elections.” It is not okay to not recognize his legitimacy, nor try to get rid of thim by whatever means necessary because he doesn’t think the same, less to burn the Prefecture building, destroy the streets and destroy the city because I don’t like his moustache.”

However, the blogger Ciudadano K [ES] calls for Reyes Villa to resign, which elicited many comments that disagreed with this point of view.

Regardless of who was to blame, there was one that placed a lot of the blame on himself.
Carlos Hugo Molina, the former Prefect of Santa Cruz, write in his blog Ágora [ES] that he feels responsible for this mess. He writes this, not as a former Prefect, but as a Christian.

For not standing more firm as a citizen who loves peace.
For being condescending with stupidity disguised by official reasons
For not telling to be quiet those that said that violence was the only political alternative
For not reacting when I heard that we have come to the “tiebreaking catastrophe”
For not realizing that the rhetoric and intolerance by some indigenist groups were creating racial hatred, the same goes for those that think of ourselves as white.
For not doing enough so that the irresponsible right does not continue with proud and arrogant rhetoric
For not banishing my words and attitudes of the phrases “Indian full of shit”, “damn colla”, “camba son of a bitch”
For not asking more firmly those who use words lightly that they should stop encouraging hate and confrontation.
If I did a little more than this, Nicomedes Gutiérrez (34) y Christian Urresti Ferrel (17), surely would be here with us today.

I ask for forgiveness.