It was in October 2004, when 19-year-old Eddie Gibson traveled to Cambodia from Thailand and went missing. Until today nobody knows the whereabouts of the English backpacker. The parents are now in Cambodia and they have offered a reward for information on Eddie Gibson.

His last email to his mother, Jo, on 24 October mentioned that he was looking forward to returning home in East Sussex. Eddie Gibson did not appear when his family went to meet him off the plane, which left Bangkok on 1 November.

After 2 years his mother is still desperate for news of her beloved son. “I think the answer lies with the Cambodians, and I still believe that somebody in that country knows what has happended to Eddie,” she wroted and post all relevant information on a web site dedicated to the mystery of the missing of the former Leeds University student.

His parents, Mike and Jo, have setup the site, Eddie Gibson Missing in Cambodia, to provide necessary information as part of their efforts in the search that involves local authorities, a private investigator, and UK police. 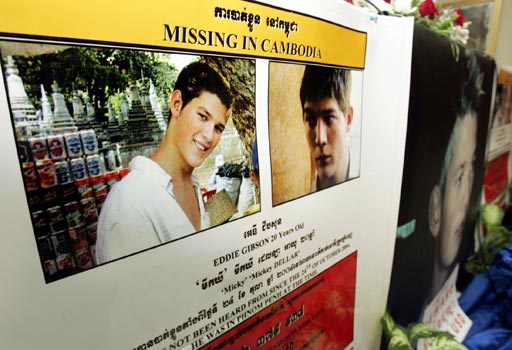 Posters of the missing UK national Eddie Gibson distributed in many parts of Cambodia. Picture originally posted by: Sopheak

Eddie Gibson, 21-year-old English national, went missing in Cambodia in 2004 after he left Thailand and entered Cambodia through Poi Pet. Eddie Gibson sent his last email, dated 24 October 2004, telling his parent that he will be back in England on December 1, 2004, but never returned. We hope that Eddie is still alive and will be found soon. If anyone has information of Eddie or seen him, please inform authority or UK consular in Phnom Penh. There is also US$ 20000 reward for anyone with Eddie's information. Eddie's parents held a news conference to help look for their beloved son.

Guy De Launey, BBC News correspondentwrote: Cambodia is becoming increasingly popular as a holiday destination for backpackers and gap-year students who are interested in the low cost of living that makes for a cheap long-term stay. Although Cambodia has been at peace for seven years, there are still hazards for visitors.

However, Saha, Cambodian-born blogger in the United States commented on the news of the mysterious disappearence of the young English fellow:

It is obvious the son fled his parents on his own free will. However, there might be some foul play, as Eddie was apparently involve in gambling. He may have owed someone lots of money. Even so, his parents are well off, and he had enough connections to escape. This leads me to believe that he “chose” to flee his parents. For whatever reason, he does not want to be discover. I feel sorry for his parents because it is difficult when your child disappear without a good reason.