China: And we don't stop

First blind reproductive rights lawyer Chen Guangcheng was charged in August last year for destruction of property and instigating a riot and sentenced to four years in prison, and land rights lawyer Guo Feixiong was arrested in September charged with running an illegal printing press out of his home, terms of sentence yet to be made public. 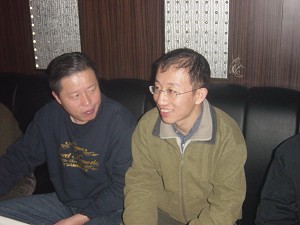 Then on January first, the day new rules granting foreign journalists increased freedom to interview Chinese citizens came into effect, all-round human rights lawyer Gao Zhisheng, his wife, his fourteen year-old daughter and three year-old son were forcibly removed from their home and rushed out of Beijing by an entourage of around twenty state security agents, according to posts on Gao's blog, now being updated by AIDS activist friend Hu Jia, himself having been under house arrest for the past six months.

The new year's eve 2007 just past was a special day in mainland China, it was the day the Regulations on Reporting Activities in China by Foreign Journalists during the Beijing Olympic Games and the Preparatory Period came formally into effect. Among them is item six, ‘foreign journalists carrying out interviews in China only need to verify consent from the interviewee's work unit.’ This suggests that at least in theory the Chinese government no longer places numerous restrictions on foreign journalists carrying out interviews. This is a necessary step to get in line with international norms. When this was announced back on December 1, 2006, foreign media journalists stationed in China began wringing their hands in anticipation, preparing to fully test out this new clause. Turns out it was window dressing from liars, a fake ‘landmark’, that the Olympic promise might be truly honored. The best test method would be to go and interview those dissenters under illegal detention or supervision. Thus, interviewing lawyer Gao Zhisheng or his family, under strict detention by the Beijing Municipal Public Security Bureau National Security Squad “Gestapo”, has become an important subject for overseas media stationed in China.

But, what occurs to overseas journalists, the Beijing Municipal Public Security Bureau National Security Squad can think up too, all the more so for the heads of the Public Security Bureau Department of Domestic Security and Defense and the Central Government's Politics and Law Committee's battle experience-rich “Gestapo”. Taking aim at lawyer Gao Zhisheng's Olympics Human Rights Case, widely watched by the world, in order to eradicate future trouble, the Beijing Municipal Public Security Bureau National Security Squad has prevented any foreign journalists from interviewing Gao Zhisheng or his wife, son or daughter by escorting his entire family out of Beijing under the cover of night.

A post the next day says Gao and his family's whereabouts remained unknown, followed by a January 6 post which reports that Gao is currently back in his hometown in northwestern Shaanxi province.

There are still 584 days left until the opening of the Beijing 2008 Summer Olympics, Hu writes at the end of his January 2nd post.