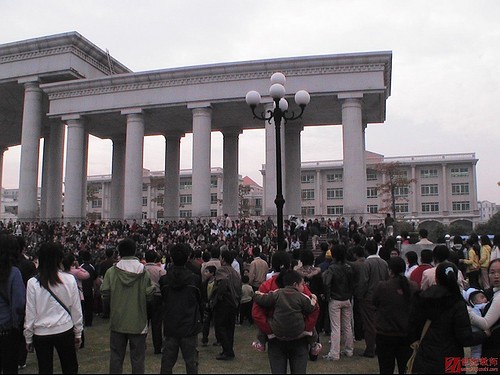 A thorough look through Google search results for “Huadu” “teacher” and “protest” suggests a media blackout, which the teachers seem to have expected, as the story has been reported on closely at the 21Teacher internet forum, at least until comments were turned off early this afternoon. Of net news sites, GoldenGoat Net, Sina and Netease have run stories, some of which have since been deleted, along with other bbs forum and blog posts. Posts at 21Teacher estimate that between seven hundred to a thousand teachers appeared on the Huadu Plaza steps at nine this morning, and four hundred patrol and riot police—who some spectators say got violent with at least one teacher—being surrounded by spectators reportedly numbering between two to ten thousand, many of which it was speculated were also teachers. One statement not being refuted online is that the teachers have remained peaceful, breaking their “silent sit-in” only to sing The Internationale.

Chances are the PLA would be sent in to ‘negotiate’ if China's state unions went and tried to organize activities on behalf of their members, so what, asks forum member lhghk123, might have instigated this? An misinterpreted signal from the top, it seems, from someone who probably meant every word he said:

I don't know how this incident will play out, but I've listened to many teachers’ discussions. They worry about getting a shady settlement from the government, maybe even getting hurt. As a common citizen of Huadu district, I also have to consider the teachers who will instruct my child in the future
…
Two days ago, December 31, 2006, General-Secretary of the Communist Party of China Central Committee, National Chairman and Chairman of the Military Commission of the CPC Central Committee, Hu Jintao visited key county in the country's poverty alleviation program Weichang Manchu/Mongolian Autonomous County in Hebei Province's Chengde City to both investigate the economic and social development situation and pay respects to the grassroots level cadres and masses. At Yudaokou boarding elementary school, Hu Jintao said to teachers, “I express my deepest repect to you.” At the same time, he told the party committees and governments at all levels to passionately care for for teachers working in the countryside, especially those in poverty-stricken areas, and to create for them the best work, study and living conditions.

There's no union to better articulate the demands but according to forum poster hdjs, they are for education officials to:

pay more attention to teachers’ salaries and create a chance for the establishment of a strong education district by increasing incomes, health insurance and other benefits.

Didn't take long for the cops to show up, and 21Teacher user tys123 was there to take some photos: 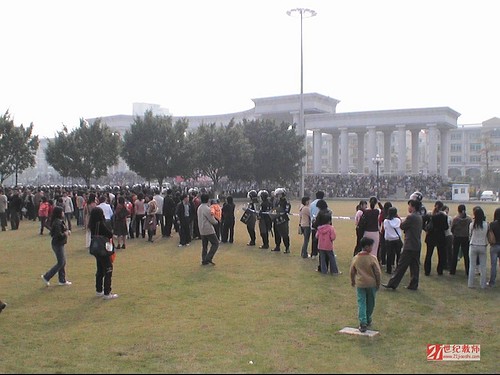 Please remember to take care of our colleagues. It would be best to not post those pictures which show teachers’ faces clearly! Using the internet, one needs to be aware! Even though you say you won't post them, there were lots of people taking photos, so please be careful!

Commenter May All Your Wishes Come True (心想事成):

None of the proposals calling for improved treatment of teachers put forward by us teachers’ representatives to district meetings of the National People's Congress over the last few years have received appropriate resolution. Facing government authority, nobody dares represent the teachers in going to negotiate with government leaders, for fear of retaliation. So, who can tell us a more legal method of resolution?

According to another post from Huadu Watch, a peaceful sit-in protest is fully within their rights according to point nine of article seventy-six of the sixth chapter of the most recent update to Mandatory Education Law, implemented on September 7, 2006, which reads:

To which user ‘student’ says:

Article twenty-eight of the Assemblies, Marches and Demonstrations Law for the People's Republic of China rules: organizers of unpermitted assemblies, marches and demonstrations will be warned by police or detained for up to fifteen days, and held criminally responsible for illegal criminal behavior.

Shortly before 21Teacher stopped allowing new posts and comments and information from teachers and those at the scene from sharing the latest updates, user 20070101 wrote:

The newest information! At three this afternoon, teacher-representatives from every school will be sent to the district committee for a meeting. Let's see what the District's intentions are first, keep calm and don't become impulsive. This is everyone's business, you cannot only consider yourself. Don't make a deadlock of things.

But 21Teacher wasn't the only website censoring news of the event, according to poster ‘orange'; just the nicest:

Since last night until early this morning I've been following this incident and many websites had reports of this incident, but were quickly shut down by some people~~~~self-deception for modern times.

Blackout imposed on media means citizen reporting of the event has limits. User ‘teacher’ posts some financial details regarding Huadu from one news website dating back to the first financial quarter of 2006:

From January to April this year, Huadu district's budget for public finances totalled 6.0233 billion yuan, placing it first for growth out of Guangzhou's twelve districts. With increased public funds, Huadu's public relations expenditures will also increase this year, including the forty million yuan taken to raise teacher's salaries in this district.

Confirming that, some bloggers pointed out that teachers in Huadu saw salaries raised last year by 300 yuan, or USD 38 per month, but was it enough? Other bloggers have mentioned vast disparities exist between salaries for teachers in Huadu and those in other districts, although no figures have yet been given on 21Teacher.

Not all the commenters agree with the striking teachers, like one anonymouse user who posted ‘Several Reasons Not To Give Teachers A Pay Raise’:

1. China's education isn't equal to begin with, and educational expenditure isn't high. If teachers’ salaries are raised, most probably it will come out of students’ own pockets. As for homes of students in economically undeveloped regions, this will undoubtedly increase their burdens.
2. In many poverty-stricken regions, there are still many children who can't afford to go to school, who can't learn. If teachers just took a little less and put this money toward sending those kids to school, China would have a few less illiterates, so why don't they?
3. The spirit of this profession teaching is dedication to begin with. If you choose this profession, you should feel this way.
4. At present, many teachers open up their homes offering private tutoring to their students. Every class fee is different. Twenty to thirty for junior high, forty to seventy for senior high, and even more so for university professors.
5. In the city, teachers drive to work, and live in commercial housing. In some so-called well-known schools, this is something quite common. As if they need still need raises?

If raises are really needed, it should be given to teachers in the hills and villages, because they are the most selfless.

Many more photos from the sit-in here and here.