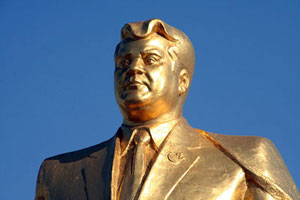 Turkmenistan's authoritarian and, to put it lightly, eccentric President Sapurmurad Niyazov died suddenly of a heart attack in the early hours of December 21st. Niyazov renamed himself Turkmenbashi, the Father of the Turkmen, penned a spiritual work called the Ruhnama, which became required reading and which he said guaranteed access to heaven if read aloud three times, renamed months after his family member, and enacted a long list of strange decrees and construction projects that often made Turkmenistan a source of unintentional and tragic comedy in the international press. (Many news agencies are getting in one last hurrah listing his odd edicts.) Deputy Prime Minister Kurbanguly Berdymukhamedov, who is rumored to be Niyazov's illegitimate son, has taken over as acting president after it was announced the constitutionally required successor has had criminal charges brought against him.

Bertrand looks at Turkmenbashi's legacy and notes that while the future of the country is hard to predict, it stands to reason that many governments will try to influence Turkmenistan's course.

Given the country’s location – not to mention its energy resources – one can expect leaders in the West, Moscow and the Middle East will be watching carefully, and probably, trying to influence Turkmenistan’s future. There may also be implications for the other Central Asian states, with whom Niyazov’s relationships have ranged from indifferent to cool to sometimes prickly.

neweurasia's Turkmenistan blog, one of the few stops in the blogosphere for well-informed comment on Turkmenistan, points out that Turkmenbashi's date of death is surely false in a lengthy and informative post on Niazov's death and the roles that Turkmenbashi's legitimate and rumored-to-be illegitimate family may play in the chaos some think is coming. The same blog continues to cover events as they unfold. Peter covers two new big developments, one of which could leave Turkmenistan a much poorer country.

Turkmenistan expert and Vremya Novostei correspondent Arkady Dubnov gave a press conference at the RIA-Novosti press agency in which he revealed that according to information in his possession, close Saparmurat Niyazov confindante and treasurer Alexander Zhadan went missing the day before Niyazov’s death.
…
Dubnov claims that Zhadan has control over all Niyazov’s financial dealings. A combination of this and the possible billions salted away in Western bank accounts may mean that Turkmenistan is a considerably poorer country today.

He also covers attempts by the exiled Turkmen opposition to return to Turkmenistan to play a role in post-Turkmenbashi politics. Early attempts to return have already failed, and he notes that even if they were successful, they probably would not amount to anything.

Not only do the wider population not have any concrete understanding of who the alternatives to the Niyazov nomenklatura might be, but perhaps more worryingly, these individuals themselves have lost any real fundamental grasp of the issues that could serve to lead the country out of its current blind alley. The occasional article in the Western press is about as much as concession the opposition seem prepared to offer to matters of popular welfare.

Once again, with the death of Niyazov and a new leaderhsip in place, the chimerical Trans-Caspian may start to be raised again, but more seriously. Such an arrangement is becoming ever more tempting to the West, which is seeking at all costs to alienate an growingly confident Russia. The pipeline would be the magic bullet that the West has been seeking in both its commercial interests and its geopolitical considerations. The prospect of affordable gas purchased at the expense of the Russians and the Chinese seems too tempting a prospect not to consider.

Sean Roberts also discusses international politics, suggesting how the US should respond, though he is not optimistic that the opportunity will be taken advantage of.

But, if it is in the interest of the U.S. (which I think it should be) that next steps include a “De-Turkmenbashification” of society and a gradual introduction of democratic reforms, more needs to be done. The U.S. needs to take a strong stance now on the developing situation before a new Turkmenbashi takes shape. Not doing so will likely only strengthen the influence of Russia in the succession process. With the gas at stake in Turkmenistan, Russia is without a doubt ready to influence the course of the succession struggle.

Other bloggers have expressed a bit of sadness at Turkmenbashi's passing. Foreign Dispatches says that Niyazov's death “is a great loss for unintentional comedy.” Carpetblogger says that Turkmenbashi will be missed (though not so much by his own people) and that she is glad to have seen Turkmenistan under Turkmenbashi, before the absurdity ebbs. Idiot’ strikes a similar note on Niyazov's death, saying “dictators are funny” (RU).

As for Turkmenbashi himself, in his secret diary, he says his death is a bad end for his year and that he regrets he will never get to see the penguins at Ashgabat Arctic World. He is happy though that his funeral will be bigger than Pinochet's.