Freedom of speech and music celebrations in the Moroccan Blogosphere

Many different subjects were in the spotlight last week, in the Moroccan blogosphere.

I'll start with Farid and his interesting numbers (Fr) about blogging in Morocco. Then comes Reda who found out, thanks to Shimon Peres, that there is a connection between laziness and Islam(Fr).

The European Union is a great success and a great failure. Why? Because the Europeans have become lazy – they don’t have children […] There is more old age, less youngsters. In Europe there is work, but no workers. In Africa it's the opposite. That is why they brought the Muslims, and Islam made its way into Europe.

Amine, a big fan of Tom and Jerry, like most of us, posts about the legendary cartoon-maker(Fr) Joseph Barbera who died Monday at 95. 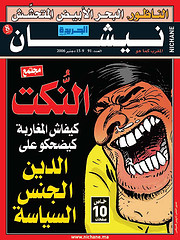 Nichane is under attack. The reason? A cover story published by the satirical magazine about the most popular jokes in Morocco. Well, it turned out that Moroccans like to laugh about Power, Sex, and Religion. Nothing really specific to Morocco since that's mostly what jokes are about all over the world. Some jokes were about God and the prophets (Ar), and for Khorafa‘s(Ar) visitors, that was worse than the Danish cartoons(Ar).

The Moroccan journalist and blogger Mohamed lachyeb(Ar) is asking his visitors to condemn(Ar) Nichane.
Koweit is also mad at Nichane(Ar), and Driss Ksikes, Nichane's director of publication, may apologize to his readers next week.
A law suit is about to be filed against the magazine, and for M.S.Hjiouj all this is simply ridicilous!(Ar).

في هذه الحالة إذن على القائمين بهذه الحملة مقاضاة كل المغاربة الذين ساهموا في تأليف تلك النكت ونشرها والتعديل عليها
In this case, they have to file a lawsuit against all the Moroccans who participated in writing those jokes and publishing them

What about those who laughed at them?

Laila Lalami posts about a Muslim Santa living in Casablanca! And that is not the only thing that is surprising her.

There is still, fifty years after independence, a persistent association of anything French with “better.” People are driving themselves into the poorhouse trying to send their kids to French lycées. A few department stores and private schools here in Casa also throw Christmas celebrations, complete with trees, trimmings, and multicolored lights. It's bizarre.

Morocco has proposed the construction of a mosque in the Chinese capital, writes Samir one of the authors of the View from Fez.

The mosque, according to the minister, is meant to help revive the symbolic dimension of the journey of famed Moroccan traveler, Ibn Battouta to China.

Do you feel like sharing your thoughts with a very “popular” president? Well, eatbees has exactly the right e-address for you. The blog of the Iranian president is ranked 204th in the world, and it seems that Ahmadinejad reads each message personally.

Is Ahmadinejad sincere in his desire to communicate with the West, or is he just a cunning propagandist searching for ever more innovative ways to pull the wool over our eyes?

Attareq blogs mostly about his daily life, and it's written in a simple yet eloquent style. The post about the death of his unborn baby(Ar) is sad and touching and the latest one about the accident Attareq witnessed in the morning(Ar) is surreal!

Adil R. who usually blogs from Washington D.C is in Morocco for a short visit. He is surprised to witness new “behaviors” taking place in his neighborhood's cozy cyber-cafe.

You can hear some speaking Moroccan while others speak other middle eastern ,Gulf to be more precise, accents.Talked to my friends about this little phenomenon and they even told me about the private cyber sex sessions that often take place.

Abdellatif Mossadeq is celebrating(Ar) his first year of blogging, congratulations.

Label ash is paying a tribute(Fr) to Ibrahim Ferrer and le mythe is celebrating Al Aloua(Fr), a Moroccan folk genre of music.

Anima is back and happy! She received an email promising her love and passion and…marriage!

Blafrancya is delighted to blog about Sherbel Rouhana(Ar), a singer who does not understand why some Lebanese insist on using French or English words instead of Arabic ones. Congratulations Lebanon, you have your own Blafrancya;)