Some days are very special for a nation. 16th December is one such day for Bangladesh. Drishtipat Blog remembers the independence of Bangladesh 35 years ago. Time magazine December 20, 1971 named it “the bloody birth of Bangladesh“.

For those who do not know why it is called so, Mash of Or How I Learned to stop worrying blog shares the history of Bangladesh Liberation war and the Pakistani Armies atrocities:

“In 1971, Bangladesh, then called East Pakistan, was part of a geographical monstrosity created by the British in 1947. Pakistan, as created by the British, consisted of West Pakistan and East Pakistan, separated by the vast expanse of the Indian land mass in the middle. East and West Pakistan spoke different languages and were culturally distinct. East Pakistan accounted for the majority of Pakistan’s population, yet it was economically exploited and politically marginalized by West Pakistan. Bengalis, the people of East Pakistan, were also persecuted for speaking their native language and for being either Muslims who had converted from Hinduism or for being Hindus. Pakistan, translated as “The Land of the Pure”, was intolerant of Bengalis because they were not ‘pure” Muslims.”
……
On March 25, 1971, the Pakistani Army launched Operation Searchlight to “eliminate” the Awami League and its supporters in East Pakistan. The goal was to “crush” the will of the Bengalis.

Then Bangladesh was devasted with genocide by Pakistani army which killed approx 3 million people, raped 40000 women, burned hundreds of villages, brutally murdered intellectuals. It was one of the worst genocides in the history of the world.

“Kill three million of them,” said Pakistan President Yahya Khan , “and the rest will eat out of our hands.”

The US government however supported Pakistan and on April 6, 1971 Archer Blood, a US diplomat based in Dhaka sent a telegram known as the “Blood Telegram“. It was signed by 29 American government officials and strongly dissented from the American government policy toward Pakistan. For his dissent from Richard Nixon’s and Henry Kissinger’s policy, Archer Blood was recalled to Washington. To millions of Bengalis Archer Blood remains a hero.

Millions of Bangladeshis took refuge in neighboring India. Quite contrary to the government policy some peace loving people of US created the forum “Americans for Bangladesh” and arranged a poetry recital program on 20th November 1971 in Saint George Church, New York. Among the poets who performed were Allen Ginsberg, Peter Orlovski, Ed Sanders etc. Ginsberg wrote and recited the famous poem “September on Jessore Road” which depicted the plights of the refugees.

1st of August 1971 in Madison Square Garden, New York. Some 40,000 people attended the “Concert for Bangladesh” arranged by George Harrison and Ravi Shankar to increase awareness for the Bangladesh's cause and to raise funds to help the refugees.

On December 16, 1971 the Pakistani army in Bangladesh formally surrendered. The world had witnessed a bloody birth of Bangladesh.

Our victory celebrations after 16th December were being overshadowed by grim discoveries of one after another killing field. Most destabilizing discovery was that of Rayer Bazaar. All of our national top doctors, professors, linguists, scientists were among the eviscerated dead bodies found here.

The Liberation war Museum keeps the archive of these periods accessible online.

Bangladesh celebrates this day with festivity. Back to Bangladesh posts some instances of how Bangladeshi flag is proudly portrayed by the people. 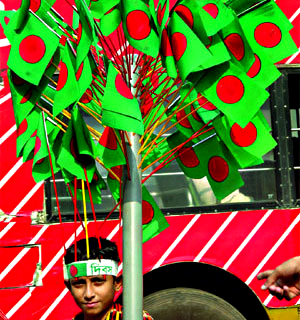 Ershad Ahmed hasmore pictures of the celebrations of the day in Bangladesh.

Angelmorn wants the Bangladeshis to be inspired by the martyrs of the liberation war.

Farhan of Conversations with an optimist remembering the amazing contribution of normal citizens turning freedom fighters in the liberation war urges the Bangladeshi bloggers to raise their voices against all odds.

Truly the Bangladesh liberation war is a source of inspiration to many Bangladeshis.