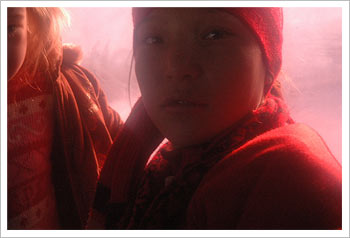 Anara is one of the ‘youth at risk’ that took part in the weekend trip. Instead of going to school, she supports her family by collecting plastic bags at Dordoi bazaar, a massive clothing market made up of thousands of containers.

Kyrgyz-US relations
The killing of an ethnic Russian driver by an American soldier is likely to put a strain on Kyrgyz-US relations, says Tolkun at neweurasia. Kyrgyz Report also comments on the story and thinks that the Bakiyev administration might use the incident to put pressure on the US to tone down its criticism towards the Kyrgyz government. This piece of news comes at a time when Kyrygz politicians voice their disillusion with “US-style democracy”. However, as Nathan reports, there is not a lot in Kyrgyzstan's political systems resembling the US form of government. Readers also offer their two cents.

Kazakhstan: back to business
With the Borat controversy ebbing from the blogosphere, it seems to be time to talk about the important things again. The decision over Kazakhstan's 2009 chairmanship of the Organisation for Security and Cooperation in Europe (OSCE) has been postponed by the foreign ministers of the 56 member states for one year. Several bloggers offer their comments: KZBlog is skeptical that Kazakhstan should be automatically given the chairmanship so that hard-liners loose part of their influence. After all, real change is already under way and unstoppable, even without the merely prestigious post. Nathan of The Registan wrote a great background post on the politics of the chairmanship and notes that Kazakhstan might actually withdraw its bid in case chances become too slim. On neweurasia, Adam Kesher provides coverage in Russian, saying that postponing the decision by one year means that the OSCE expects real reforms to happen now.

Another interesting story that got discussed in the blogosphere relates to the recent nomination of a well-known British businessman as the chairman of a state-owned holding company. Sir Peter Evans will, among other managerial tasks, make sure that several of the companies held by the state get listed on the London Stock Exchange. Sean Roberts, on his Roberts Report blog, notes that this state capitalism reflects President Nazarbayev's admiration for the East Asian ‘Tigers’, but that the nomination of a controversial figure as the head of the holding also bears interesting parallels to a corruption scandal in the 1990s. At neweurasia, Ben also comments on the story, saying that by creating this holding company, the state is cementing its hold on the economy – and sending out clear signals against the free market and transparency.

No electricity in Tajikistan*
The construction of a new hydroelectric power station led to electricity cuts in almost all parts of the country this week. On neweurasia, Rahmon has some apocalyptic thoughts (RUS). Winters in Tajikistan are severe and this year is no exception. Why not do the construction work in the summer? Vadim says that in warmer seasons it is not possible to do the construction due to excessive amount of water in Vakhsh river. Myspace user Cole is describing the situation in Khojand where he is currently living and working. He regrets that he went to Tajikistan because the lack of electricity cuts him off all goods of modern civilization. He is not able to work in his office and his days are spent sitting in the cold darkness because on average he gets about one hour of electricity in the morning and one at night. Here what he thinks of Tajikistan:

When God was making Tajikistan he thought to himself, “Why don’t I create a barren mountain outpost in the middle of the largest landmass in the world, give it frigid winters, and endow it with leaders who are too corrupt and inept to provide the barest of essentials to its people, namely electricity, water and gas.”

Which road for Uzbekistan?
A recent and rather bleak International Crisis Group report on long-term prospects for Uzbekistan prompted a critical comment by Vilhelm Konnander. While he agrees with the main tenets of the report, Konnander asks whether a more refined and realist view on what stability means in the Uzbek context could change our perception of the situation, especially in the complicated regional context of Central Asia:

By now, it would appear a well-established fact that democracies are stable but democratisation is shaky. Therefore, one might, contrary to ICG's argument, assume that the US is quite happy with the current situation.

Meanwhile, the results of a rather dubious public opinion poll were published. Nathan of Registan reports that, according to the findings, the overwhelming majority of Uzbeks are content with their constitution and the rule of law in their country. A news outlet now speculates whether there exists another Uzbekistan somewhere on the face of this planet. While the results of this particular poll are questionable, more independent and neutral ones have found that Uzbeks are really on average happier with their lives than other people from the former Soviet Union, as was reported some while ago on neweurasia.

*This section is taken and adapted from Vadim's excellent roundup of the blog posts about Tajikistan, posted fortnightly on neweurasia. For more roundups on the region, check Leila's bi-weekly Voices from Kazakhstan on Global Voices as well as Yulia's Kyrgyzstan update.