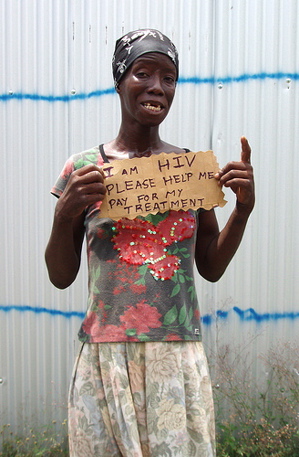 It's widely acknowledged, in the Caribbean and elsewhere, that the fear of stigma and discrimination is a major factor preventing people with HIV/AIDS from seeking treatment or from admitting their HIV status publicly.

For this woman, however, photographed in the streets of Kingston, Jamaica by blogger and Flickr user Ria Bacon, social stigma is hardly a concern. As Bacon writes on her blog:

“When I asked to take her picture, I suggested that I wouldn’t photograph her face. “Nah man,” she replied. “P’haps udda people learn from my mistakes.”

When I showed her the picture, she smiled sadly: “Bwoy, dat a huggly face!” [Boy, that's an ugly face!]”

The Caribbean is second only to sub-Saharan Africa in its rates of HIV/AIDS infection. At the end of 2005 it was estimated that 25,000 people in Jamaica — or 1.5% of the country's population between the ages of 15-49 — were living with with HIV/AIDS. Haiti, the Bahamas and Trinidad and Tobago are the Caribbean territories with the highest incidences of HIV/AIDS.